Tag Archive for: venus is a russian planet 2020

Because I was too focused yesterday on finishing my next “Charts in the News” column for Mountain Astrologer, the Sneak Peek at the Week was delayed. Upside: I got to read Beth Owl’s Daughter’s Really Useful Tarot Card of the Week before I started writing, and was delighted by this opening quote:

Never lose an opportunity of seeing anything that is beautiful, for beauty is God’s handwriting — a wayside sacrament. Welcome it in every fair face, in every fair sky, in every flower, and thank God for it as a cup of blessing.
Ralph Waldo Emerson

I did a lot of appreciating beauty yesterday, the second day of a spontaneous end-of-the-season escape to Shelter Island. It really is an island, accessible only by ferry. After filing my TMA column around tea time, I crossed paths with a number of deer, woodchucks, squirrels and rabbits — none of whom appeared to have any knowledge of the Supreme Court, money-laundering or Lindsay Graham. I look forward to more of such encounters during my escape.

Usually I do an analysis of the chart for the Autumnal Equinox set in Washington, D.C. The chart for a change of seasons is a turning point and can be used to assess potential for the next three months. All I have to say about this chart is that the Ascendant is 0 degrees Scorpio. The early degree suggests that there is much Free Will at play; it’s too soon to tell how it will all go down. But because my Gemini Moon is inclined to be generous with its time and wealth of information, I had to explore the Sabian Symbol for that early Scorpio Ascendant.

“A sight-seeing bus” conveys a friendly and open approach that reminds me of the wisdom of seeking beauty in all things, as Beth Owl’s Daughter’s Tarot Card advises. It’s quite a surprise to read the words “open approach” with anything related to Scorpio, as Sabian Sage Blain Bovee remarks here.   But that’s how he suggests we play this hand — as a a tourist on a wild ride or a magical mystery tour. Bovee’s further advice here feels apt for the current Mars retrograde,  arguing against efforts to ram through anything. Mars retrograde actions have a curious way of backfiring once Mars turns direct, which won’t happen until mid-November. 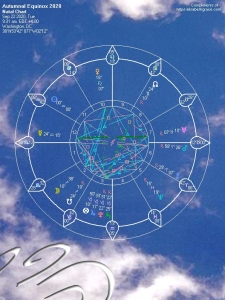 In general, last week we could anticipate:

News from underground, startling headlines involving women, money, values and social expression. Add in efforts on the part of the Patriarchal Powers That Be to further its drive for for continued control.

(A pause, while my train of thought is interrupted by a female cardinal chirping on the patio. A cardinal visit in honor of the equinox?)

This is one of the biggest stories of the week — and fans of Sarah Kendzior’s book, Hiding in Plain Sight will appreciate it:

Avid Readers may recall that planetary patterns argued for a resurgence of Covid-19 this fall, as Mars activates Jupiter-Saturn-Pluto in Capricorn and Jupiter-Pluto move to their third and final conjunction (exact November 12th). We are in fact seeing a second wave in Europe, and in the UK they are preparing for another lockdown.

The Venus-Uranus square was the set-up for last week’s New Moon, which we anticipated would affect the U.S. thusly:

Seeds for a big communication initiative or opinion in publishing or courts — likely related to P45’s fortune, for better or worse. Think of “two men placed under arrest” as a time out; a captivating bit of news and/or a suspension of normal rules.

“Two men placed under arrest” refers to Mercury at 18 Libra in the chart for the New Moon. Last Friday, with the Moon at 18 Libra (astrology is amazing), we learned of the death of Supreme Court Justice and fiery dissenter Ruth Bader Ginsburg. Within an hour,  Mitch McConnell announced he’d waste no time in filling Ginsburg’s seat (making this a priority over voting on legislation to ease the suffering of those still financially hurt by the ongoing pandemic). A truckload of Republican Senators who swore in 2016 on the graves of their grandmothers that they would never ever ever every consider filling a Supreme Court seat during the 2020 election year threw their own words under the bus. It’s all quite “arresting,” this “suspension of normal rules,” hmm?

Well. We knew October was going to be a wild ride. Thank goodness for astrology to manage expectations. Meanwhile, Avid Reader Katya had a few deep thoughts on the symbolism of last week’s Venus-Uranus disruption:

“…maybe the link between the Russian claim on Venus story and the energy around the death of Ginsburg is a coopting of the feminine – I’m thinking of the rush to replace RBG with (any) another woman, as if that confers legitimacy to their naked-boy power grabs, which have eclipsed decent attempts to treat her passing with dignity and grace.

Avid Reader Katya’s musings reminded me of something astrologer Michael Lutin penned back in 2012 — about the ingress of the fixed star Regulus into Virgo. In his view, the naked boys can power grab with all their might, but the future is decidedly female.

Are you registered to vote? Need the 411 on early voting in your state? Stephen Colbert has a video made just for you! Check out BetterKnowABallot.com — and get yourself to the polls as soon as you are able. It’s fun! It’s civic! It’s do-able!!

If you find this forecast of value, please consider supporting the work via the Cosmic Tip Jar. If you’re in need of astrological insights on your own personal horoscope, I am delighted to provide them. Here’s the 411 on personal consultations. 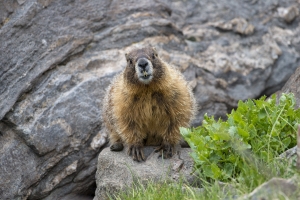 Adorable woodchuck brought to you