The weekend is brought to you by the Moon in Pisces, facilitating empathy, intuition and ideals. Wallowing in misery would be a downside potential of Pisces, as would drowning one’s sorrows as a means of escape. At 2:57 PM ET, the Pisces Moon squared Venus in Gemini. Suffering and fate, challenged by Gemini’s need for entertainment comes to mind, especially while watching unmasked humans protesting their state governors’ efforts to keep them and everyone else safe from Covid-19. A sextile (harmony) between Mars (walking) and Mercury (talking), exact at 11:55 PM ET is arguably being reflected in these “zombie” boots-a-marching over the past few days.

Saturday is the last full day of the Sun in Aries. On Sunday at 10:46 AM ET, Sun enters Taurus.  If Aries is the spark that generates an idea, Taurus is the material that gives it form. What will we build over the next 30 days? Moon meets up with Neptune in the early AM — note your dreams. Count your blessings as Moon sextiles Jupiter and Pluto and 4:50 PM ET and  7:31 PM ET.  Chill for the rest of the night, as the Pisces Moon will be void.

No sleeping in on Monday. At 3:01 AM ET, Moon charges into me-me-me Aries — and enters the balsamic phase of the lunar cycle. No, this is not a salad dressing; rather, we’re now in the dark side of the Moon. This is a time to wrap up projects from the last cycle and consider your intentions for the new one that begins on Wednesday. Meanwhile, remember that activities that happen when the Moon is dark are more likely to fly under the radar. Clandestine meetings that happen now are likely to be especially heavy, reflecting the streamlined authority of a challenge between the Sun and Saturn, exact at 3:00 AM ET on Tuesday. The last heavy Sun-Saturn pattern — a conjunction —  happened on January 13th; the last Sun-Saturn square occurred in October — here’s what was happening then.

Reflecting the hardcore reality check of the Sun-Saturn square, I offer you — and especially Avid Reader Helen —  the entire NYT Sunday magazine:

I hope these first-hand accounts dispel any remaining doubts about the veracity of the harsh reality humans are experiencing in New York hospitals — and others, too — as a result of Covid-19. As I type, this story has caught my attention:

UPDATE: on Joe Biden. If his 8:30 AM birth time is exact to the minute, he will have the first of three exact contacts between Neptune and his Midheaven on Monday, April 20th. Many astrologers (myself included) have noted the downside potential of this particular pattern: feeling like you’re standing on quicksand; being victimized, wiped out or scandalized. But we must consider the potential upside, especially since Biden is now the presumptive Democratic nominee.

A strong Neptune transit can also feel like a dream come true, in every shade of rose. One could be seen as a savior, perhaps — and what happened last week to reflect that potential was that Bernie Sanders, Barack Obama and Elizabeth Warren all endorsed Biden.  Here’s Obama’s video, in which he also gave a shout-out to Bernie Sanders. Bernie gave Biden his surprise blessing starting at around a minute in to this livestream from their respective homes. Warren released an elegant video, praising Biden’s sense of service, empathy and healing faculties. Well, that sounds like Neptune.

Biden’s horoscope is quite busy for the next four weeks, so we should see more of him in the headlines. The second Neptune-Midheaven hit happens at the end of August, just after the planned Democratic National Convention.

The Sun’s square to Pluto and Jupiter last week suggested stories of awesome power and resources. It was an apt time for the U.S. Treasury to send $1200 checks to millions — and it seems they got some of it right. Here’s the latest on why your share might not have been delivered.

My favorite power & resources story  is this one:  Captain Tom Moore, war veteran, “to help open new hospital” after raising $29 million for the UK’s National Health Service. Captain Tom will be 100 years old on April 30. On a lark, he launched a fund-raising drive, as a show of gratitude for the care he’s received from the most excellent NHS. He vowed to walk 100 laps around his garden and figured he’d raise a thousand pounds. The rest, obviously is history — and yes, his horoscope reflects this aptly-timed resource-generating potential. Here it is calculated for noon: 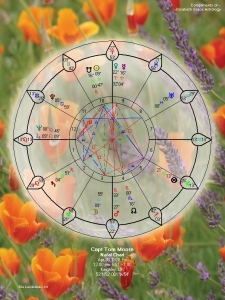 We see an empire-building earthy Taurus Sun in a supercharged square to a grandly philanthropic Jupiter-Neptune conjunction in Leo. That conjunction is being activated by the rainmaker potential of a square from transiting Uranus, which is also presenting his Taurus Sun with a breakout opportunity to be his unique self, without compromise. His Venus (values, money, social expression) is at 22 Aries, supercharged in recent weeks by Mars, Jupiter, Saturn and Pluto. His Mars (action, assertion) is at 27 Libra, also activated.

We don’t have a birth time, so we can’t tell how his Libra Moon is being activated now, but it must be extremely fulfilling for Captain Tom to be appreciated for being so people-pleasing at this time. Even more fun — for those Avid Readers who are familiar with midpoints: Captain Tom has the midpoint picture Venus = Jupiter/Pluto, suggesting potent creativity and flair. It’s so awesome — and aptly timed — that he has generated so much power and resources, reflecting patterns in his unique horoscope.

What’s going on in your horoscope? Here’s the 411 on personal consultations. Meanwhile, much gratitude to Avid Readers, Fairy Godparents and Guardian Angels who pledged support of this forecast with Faithful Monthly Expressions of Appreciation. Avid Reader Diane says it’s about time I listened to her, and she insists I tell everyone about my Cosmic Tip Jar on a regular basis. And of course, with Avid Reader Diane’s Moon in Scorpio and black belt in aikido, resistance is futile.

It’s 7 PM in New York. Time to go to the window and cheer for all the health care professionals and essential workers who are putting their lives on the line in the battle against Covid-19.

Wear a mask and gloves.  Wash your hands. Maintain social distance. This is not going away any time soon, so please be patient. We will get through it together. You know that saying, “all the problems you have are already resolved…you just haven’t gotten to that point in time yet.” One day at a time. 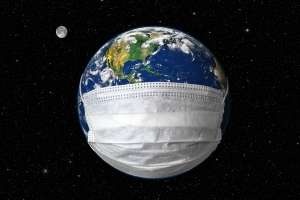 Elements furnished by NASA.  Thanks, NASA!