The work week is driven by the Moon in me-me-me Aries, seeking accolades for its ability to get things started with enthusiasm and (sometimes) impatience. With Mercury retrograde and the Moon in the last days of its cycle, initiating a review or reorganization would be apt. I plan to spend the afternoon editing a piece that will be published in the July issue of Mountain Astrologer — joy oh joy! You? I’ll be also harnessing the mental structuring potential of this morning’s harmony between Mercury (ideas, communication) and Saturn (structure), exact at 4:15 AM ET.

Saturn-Mercury connections challenge us to get real. There are no alternative facts — those are in wiggy Mercury-Neptune’s imaginary world. How fitting to have a Mercury-Saturn alignment in effect for a global March for Science! Here are some of the cleverest signs from around the world. There is no Planet B!

On TUESDAY, the dead Moon suggests feelings of listlessness and restlessness, as we sense something new  is coming, but we don’t know what. Still, patterns suggest an eventful day, given the Moon’s weekly clash with the planetary heavies (Pluto and Uranus), boosted by an overnight hit from expansive Jupiter. Note the possibility for upsets and power plays (watch the headlines), and make a conscious effort to temper your responses to perceived crises in your own personal world. Remember that Mercury is still very much in retrograde, increasing the potential for flaws and tech glitches in the information flow. Patience, focus and silence are your best friends.

The New Moon begins on WEDNESDAY at 8:16 AM ET, planting seeds for a new cycle firmly in security and comfort-seeking Taurus. On FRIDAY, Venus leaves Pisces for Aries, bringing prominence to matters involving women, art, money, values and social expression. In Aries, Venus is a bit of a flirt, frankly. It needs to know that it is loved by everyone. So it may well spice up your social interactions for next month, inspiring you to connect with new people. It may also inspire a diplomatic crusade (minus the diplomacy), barking orders impatiently. “Sit! Down! Stay!”

Also on Friday: retrograde Mercury reconnects with wacko rocket scientist rebel Uranus. Whatever bright idea that was making news around March 26th (the first connection) is likely to be up for a second look. The third hit of the cycle happens on the next Full Moon — May 10th. You are more personally impacted by this electric meet-up if you have a planet or angle around 25 degrees of Cancer, Libra, Capricorn and especially Aries.

But really, what do all these planetary patterns suggest for you in your own personal world? Are you going to get that promotion? Is your latest flame a keeper? Will you move to Guatemala? These and many more questions can be addressed in a consultation. Here’s the 411.

And now, the news. Lots of it. Because I was on a Mercury retrograde REtreat the week before and playing catch-up all last week. Ready?

Take a sensitive Venus retrograde in Pisces, oppressed by harsh Saturn in Sagittarius (controls, travel, foreigners). Add Mercury (mindset, travel), about to turn retrograde, along with the waxing emotions of a volatile Full Moon. Toss in a meet-up between Sun and shockjock Uranus (which rules aviation) and watch all hell break loose, as a United Airlines passenger is violently dragged down the aisle of a plane because United decided that it was more important to give his seat to a crew member. Watch United say the flight was overbooked (when it wasn’t) and then watch the CEO try to blame it all on the passenger’s “belligerence” (even though video of the event proves otherwise).  Cue NYT op-ed bemoaning the loss of empathy in favor of corporate profit.  Then watch the media apparently confuse the passenger with another person with the same name, causing headaches for anyone trying to discern what is true and what is false.

Meanwhile, P45 did exactly what we expected him to do when Mars (action, aggression) connected with his testosterone-fueled Midheaven in the wake of that volatile Full Moon: he dropped the biggest non-nuclear bomb in our arsenal on Afghanistan. So when CNN wonders in an op-ed, “Why the ‘Mother of All Bombs’ and Why Now?”, you have an insight CNN doesn’t. You totally saw this coming. A few days later, when it was announced that the aircraft carrier Carl Vinson was heading towards North Korea, you also knew that this aggressive act coincided with Mars making contact with P45’s natal Mars and Ascendant. The fact that the Carl Vinson was actually heading to Australia (and thus confused everyone), is your Mercury retrograde cosmic joke.

Meanwhile, there was a constitutional referendum in Turkey on April 16th. Voters were to decide if the constitution should be amended in a way that would expand the powers of its president. There was a Turkish astrologer in the retreat I mentioned at the top of this forecast,  and so we decided to take a look at the chart for the start of the referendum vote: 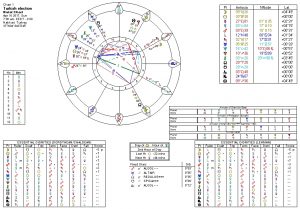 We did not like what we saw. If you were a would-be authoritarian dictator seeking to consolidate power, this would be a marvelous time to schedule a vote. Not only does this chart have the cold, cruel square between patriarchal Saturn and vulnerable Venus, it also has the opinionated Sagittarius Moon about to be blocked by a brick wall. So we can see the potential for harsh controls on foreigners, the press, education  — any arena relating to collective beliefs.

An even greater concern is a likely stubborn and misbehaving Mars exactly on the 26 degrees Taurus Ascendant. Taurus rising needs to be seen as the face of preserving and maintaining the material comfort and security status quo; however, Mars on the Ascendant suggests a need to take unyielding militant action in its quest. No good is likely to come of this, suggested by the Fixed Star Algol right there with Mars and the Ascendant.

As it turns out, while the outcome was contested by opposition parties,

Voters narrowly approved a set of constitutional reforms that will transform the country from a parliamentary democracy into a presidential republic, concentrating power in the hands of Erdoğan, who will be able to run for two more terms and potentially govern until 2029…

…which is what the chart for the election suggested. Mr. Erdogan was mentioned in this forecast almost a year ago. A proposed birth time gives him an 18 Capricorn Ascendant. Pluto just turned stationary retrograde at 19 Capricorn, suggesting that for Mr. Erdogan the next two years will be transformational and empowering indeed.

In other news, France held an election over the weekend and true to the promise of the aftermath of the disruptive Uranus-Pluto square, the establishment candidates are no longer in the running. A run-off between “newcomer” and centrist Emmanuel Macron and “let’s trash the status quo” Marine LePen will be held on May 7th.

Isn’t it cool that France has elections on Sundays?

UPDATE on Rupert Murdoch. Last fall it was noted that:

…Rupert Murdoch’s horoscope  was directly affected by last week’s eclipse, sitting right on top of his 11 Virgo Midheaven (status/profession), which is also impacted by transiting Saturn and Neptune. I noted these current challenging patterns at the beginning of the year when he announced his engagement to Jerry Hall. They suggest heavy controls and no small amount of uncertainty and/or scandal. These patterns will be in effect into 2018 and beyond.

Is it just coincidence that the huge scandal known as “we were happy to pay women millions of dollars to settle charges of sexual harassment against our cash cow (a.k.a. Bill O’Reilly) — until corporate America refused to sponsor his show, so guess we have to fire him now” broke last week? We do not have an exact birth time for Mr. O’Reilly, but if we did, I imagine the horoscope would be hit hard by transiting Uranus. Here’s to The Daily Show for its fitting send-off.

Let’s see…I could cite more stories exemplifying the harsh judgments and censorship suggested by this month’s double hit of Saturn square Venus. Those would include the rush to execute prisoners who are on death row in Arkansas, because the state’s stash of lethal drugs is going to expire and it’s not sure if it will be able to acquire more. It would include the fact that newbie SCOTUS justice Neil Gorsuch cast his first vote of significance on that third Saturn-Venus square, and it was a vote to deny a stay of execution.

Or I could tell you instead that April the giraffe gave birth on the 16th at around 10AM in Harpursville, NY. Zillions watched the birth live on the web, and of course they would because that cute little giraffe baby was born with a 1 degree Cancer Ascendant — at the Aries Point — literally born to be noticed.

A pause, while I contemplate that today is the 8th anniversary of this forecast. What a journey it’s been! Soon I will increasing my rates — something to keep in mind if you’ve been thinking of scheduling a consultation but haven’t gotten around to it yet. Now is the time!

Thank you for reading — and sharing — this forecast. If you would like to support my efforts to keep you up-to-date on planetary patterns, the Cosmic Tip Jar is here, with gratitude for your appreciation.