Intense, deep, stubborn, controlling and wet — those are a few keywords for the Moon when it is in Scorpio, where it’s been since early Saturday. As of 5:38 AM ET, it’s also void of course — i.e., traveling without focused direction until it enters the next sign — Sagittarius — with a huge sigh of relief. That shift happens at 3:48 PM ET. Until then, roll with the flakes and twists. Stick to routine. Crises which crop up during voids are often much ado about nothing. Chill! Your other Moon voids this week happen on THURSDAY 12:42 AM ET – 4:18 AM ET and SATURDAY 12:30 PM ET – 4:06 PM ET.

Once the Moon enters Sagittarius, everyone is sure to have an opinion — the more boundary-pushing, the better. Get out of your rut; expand your mind; connect with nature; catch a foreign film; think positively; avoid putting your foot in your mouth and/or tripping over the furniture.

On THURSDAY retrograde Mercury backs into Leo at 11:29 AM ET, where it will slow to a crawl as it prepares to move direct on Tuesday, September 5th. What does this suggest? Note that Action Hero/Angry Bird Mars will be at 28 Leo on SATURDAY and SUNDAY. Last week’s awesome solar eclipse happened at 28 Leo. A planet that travels to the degree of an eclipse serves as a trigger — i.e., a release of energy/action bottle-necked by the eclipse. Got that?

Mercury (information, communication, travel) will meet up with Mars at that same degree — 28 Leo —  on SUNDAY at 5:39 AM ET. What will be the fallout (sometimes, literally)? What secrets will be revealed? What royal edicts will be issued (when cooler heads really ought to prevail)? Mercury will hang at 28 Leo until it turns direct. Could be an interesting few days for those with significant planets and points at that degree. Consult your local astrologer for details.

A harmony between Mars and Uranus on SATURDAY at 8:13 AM ET suggests headlines including, but not limited to tech breakthroughs and aviation. We shall see.

Meanwhile, water, water everywhere — in Texas.  Hurricane Harvey continues to rain on Houston, reflecting the wretched potential of a depth-seeking Scorpio Moon. Why Houston? Why now?  Are there any astrological patterns suggesting this heartbreaking horror show?

Well, it is interesting to note that the chart for the August 21 solar eclipse set in Houston has a Midheaven (public status) of 0 degrees Virgo — with the eclipsed Sun and Moon sitting right on top of it, separated by just one degree. The chart set in Houston has a 23 Scorpio Ascendant, challenged by the North and South Nodes. I’d translate that potential as an image of depth and control, while feeling trapped between a rock and a hard place. Mars is at 20 Leo, physically challenging that image when it hit 23 Leo early Saturday morning. We will see more Mars action in this Houston New Moon chart between September 2nd and 5th. 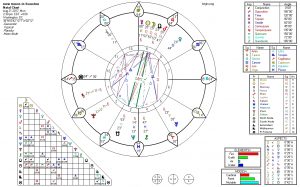 It is also interesting to see Neptune running wild in the chart, yet in an obsessive-compulsive relationship with the Sun and Moon. Neptune refers to water, floods, displaced persons, dissolving of boundaries. This pattern was in the chart for the New Moon/Eclipse in every location. Neptune also refers to oil, oceans and naval matters — and here I would be thinking of another recent big headline: the collision of a oil tanker with the U.S.S. John McCain, in which ten U.S. sailors perished.

Meanwhile, the city of Houston also has a horoscope — born on August 24, 1836 at 12:38 PM. Houston’s Sun is 1 Virgo — also hit by the August 21st eclipse. Coincidence or conspiracy? We see Mars hot in this horoscope late next week — the 7th through the 9th. We anticipate action and/or assertion.

Of course there is always the possibility that the real culprit here is Mother Nature, aided and abetted by climate change caused by human activity, like most scientists say. And that it doesn’t really matter to Mother Nature that U.S. government agencies, under the dangerously deluded direction of the P45 adminstration, have scrubbed the words “climate change” from their websites.  Guess they haven’t gotten around to NASA yet.

Some weeks ago in Astrologer Land there was an article published arguing that the time on the birth certificate released by P45 wasn’t correct, and that we should be using the birth time cited by his mother.  I don’t know about that, given the responsiveness of the horoscope calculated with the time on the birth certificate. For example, we’d expect a public assertion of regal machismo on or a day before the morning of August 27th, when transiting Mars (action) challenged his Midheaven (public status).  Sure enough, late on Friday when many were focused on the impending Hurricane Harvey, P45 “pardoned” Joe Arpaio, former sheriff of Maricopa County (AZ). Here is the must-read article on Mr. Arpaio, if you’re not quite sure what heinous things he has done.

We don’t have an exact birth time, but here is what we know of Mr. Arpaio’s horoscope.  OMG, he shares a birthday with P45 — June 14th. Gemini Sun — Libra or Scorpio Moon, likely squared by patriarchal Saturn. That can be lean…and downright mean. Macho Mars at 24 Taurus — conjunct wounded healer Chiron and the wretched Fixed Star Algol; retrograde Venus is conjunct Pluto; Neptune and Mars are running wild. Translation: we see the potential for a man on a misguided mission;  prone to over-the-top emotions in matters of homeland/family, inflicting aforementioned meaness on others as a twisted retaliation for the misery he likely experienced in his early home life. It will be interesting to see what squeeze he may be feeling in October/November, when transiting Saturn opposes his Gemini Sun for the third time this year.

Over the weekend, P45 also reversed an Obama-era rule that prevented local police departments from getting their hands on military equipment. Because what local police department would be complete without its very own grenade launcher? Earlier this month he rolled back Obama-era flood standards for taxpayer-financed infrastructure projects. Will that one be REconsidered, as one might hope with a bright idea that launches during a Mercury retrograde? Meanwhile, macho militant Mars hits P45’s regal Leo Ascendant on September 5th. Actions are sure to make news. Stay tuned….

…and ending on a fun note. Lost objects have an odd way of turning up when Mercury is retrograde. In Canada, a woman was delighted to find her engagement ring when it was pulled out of her garden….wrapped around a carrot!

Housekeeping note: if you ordered and paid for a personalized report about last week’s solar eclipse, it was prepared and emailed to you. If you have not received it, please let me know (to Avid Reader Mary — thanks for emailing me to say you did not receive the report. Please check your spam folder — it was sent on the 19th).

Thank you for reading this forecast. Contributions to my Cosmic Tip Jar are always welcome. If you curious to know how all this talk of planetary patterns mean for you personally, here’s the 411 on consultations. We will have an excellent discussion together.