And how was your Full Moon in Scorpio weekend? Powerful, cathartic and/or intense? If you have a planet or angle around 27 degrees of Scorpio, Taurus, Aquarius or Leo, you may have been personally affected by the Scorpio Moon’s need for emotional depth (for the sake of power and control), challenged by the Taurus Sun’s need for material comfort and security. What should have the greater priority: what is mine or what is ours?

The Scorpio Full Moon was exact at 5:11 PM ET on Saturday. Supporting its quest for depth was a daring and disruptive meet-up of Venus and Uranus in Taurus, exact at 12:16 PM ET on Saturday. Earlier that day, a harmony between Mercury (mindset, communication) and Pluto (news from underground) facilitated revelations.  If you watched the SNL season finale, you would have noticed a focus on sensual concerns presented in exceptionally earthy, daring, provocative and definitely unconventional ways. With Sun, Mercury, Venus and Uranus in Taurus, how could we not? Plus, by the time SNL aired at 11:30 PM ET, the Moon was in Sagittarius, pushing boundaries of opinion to the max. It was a welcome relief — and release — from an intense week.

The Sabian Symbols for the Full Moon are “the king of the fairies approaching his domain” (for the Moon), and “a woman pursued by mature romance” (for the Sun). Sabian Symbol sage Blain Bovee suggests we apply these Symbols with a mind for “…attempting to maintain a mature center while being called to a deep longing; trying not to lose one’s head in love and romance…personal creativity blooming late in life; attentions that seem to come out of another realm; a strange sense of security in never quite returning home; staying with a rigid routine out of fear of mystery.”  For more insights from Bovee, look at the preceding links.

As for “trying not to lose one’s head in love and romance,” note that the 26-27 degree Taurus Sun was conjunct Algol, a fixed star associated with decapitation, demons and the destructive fury of women scorned. Still, there is a positive potential to Algol, which you can read about here. Meanwhile, one of the sketches on SNL involved a Ouija board and a female demon. Coincidence or conspiracy?

As for today and the rest of the week…

Random observation on Game of Thrones: it was THE television series coinciding and reflecting the seven-year series of Uranus-Pluto squares in Aries (which rules iron) and Capricorn (executive authority). At the end of the day, the Iron Throne was destroyed, along with nearly everyone in the cast. But after the apocalypse, the survivors then focused on creating a variety of new democratic systems of governing. We can see how that trend could develop in real life, as in December 2020 Jupiter and Saturn (collective beliefs and structure) will meet up at 0 Aquarius (the people). Looking even further ahead, we see Pluto leaving Capricorn and entering Aquarius in 2023. Power to the people!

In Wednesday’s forecast,  with macho Mars at the Aries Point and leaving Gemini for Cancer (family, women), we anticipated a significant attack in the current war on women. Alabama happily obliged, as 25 white male Republicans voted to ban abortion, with no exception for rape or incest. A doctor who performs an abortion could be imprisoned for 99 years. The vote was 25 – 6, and signed into law by Alabama’s female governor. If you find that news distressing, you’ll find comic relief in Stephen Colbert’s take, as well as SNL’s Leslie Jones.

What’s going on in Alabama’s horoscope?  Here is an awesome write-up, posted in November 2017, when Doug Jones was running against accused sexual predator Roy Moore. Back then, transiting Saturn put the squeeze on Alabama’s renegade Sun-Uranus conjunction in the 8th house (of sex, death and money). Now Alabama’s Sag Sun is feeling the expansive influence of transiting Jupiter, as well as the potential for reckless initiative suggested by transiting Uranus squaring Alabama’s regally entitled Leo Mars. These patterns will continue into early 2020, but that’s not all. Transiting Saturn and Pluto will be sitting right on top of Alabama’s 24 Capricorn Midheaven, which will be eclipsed this July. So when Saturn and Pluto do arrive at 24 Capricorn next year, we may see a rush of action that forever changes Alabama’s status. Adding to the potential for upsets and change: transiting Uranus will cross Alabama’s 8 degree Taurus Ascendant through 2020. Meanwhile, as you would have seen in the 2017 awesome write-up, Alabama was ranked #31 among all states in the category of infrastructure. Two years later, it has slipped to #38. One thing hasn’t changed: Alabama is still rated #50 in the category of education.

In other news, when Venus is in a charged pattern with disruptive Uranus, we often see a record broken in the world of art. Last week that record went to U.S. Treasury Secretary Steven Mnuchin’s father, who paid $91 million for a sculpture by Jeff Koons. As The Root irreverently reports, this is the highest amount ever paid for the work of a living artist.  Of course Steven Mnuchin would be in the news last week, as transiting Mars opposed his Aries Point Sun.  And of course Barack Obama would be making news too, as Mars was conjunct his Aries Point Venus. Last week he announced the formation of a DNC  “Unity Fund” to back the party nominee.

Speaking of party nominees, at least two new Democratic challengers joined the race: New York Mayor Bill deBlasio and Governor Steve Bullock of Montana. As a New York City resident, I couldn’t be bothered to even look at deBlasio’s horoscope, but Bullock intrigued me. Even without a birth time, patterns in his horoscope (4/11/66 in Missoula, MT) are heating up. His Aries Sun is feeling the empowerment of transiting Pluto through 2019, suggesting he is likely to receive serious attention (Alexandria Ocasio-Cortez enjoyed a similar power surge when she won her seat in Congress last year — check out this post from 2018)  I can’t tell you how delighted I am to read — just moments ago — WaPo’s Jennifer Rubin’s latest op-ed:  ‘Steve Bullock might be the best-kept secret in the Democratic race.”   Astrology is amazing.

Also amazing: what’s happening in the Nevada State Legislature, the first and only state legislature where women outnumber the men. How cool and progressive is Nevada? When I googled “Nevada horoscope,” I found three articles written on the subject that were not posted on academic astrology sites. Here is one — a fine analysis — and astrology students can look and appreciate why Nevada will continue to make disruptive headlines into 2020.

Are you due for a disruptive streak any time soon? Find out in a personal consultation. Here’s the 411. And here’s a rave from an Avid Reader that made my day last week:

“Thanks for being phenomenally good at your profession, and also for being a fun and comforting friend and confidante.”

I am delighted to be of service. Thank you for reading this forecast. 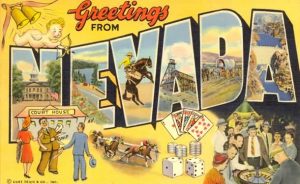