Moon continues in Sagittarius, pushing boundaries and spouting opinions, whether you asked for them or not. It goes void at 8:45PM ET, not to enter Capricorn until 10:12AM ET on WEDNESDAY. Chill during the void and resist the urge to make a mountain of crisis out of a molehill. With the added snafu potential of Mercury  still retrograde, chances are you may have misunderstood whatever was said. Err on the side of caution  and don’t hesitate to ask for clarification.

The Moon will be void again on FRIDAY between 3:07AM and 8:29PM ET – another day to chill and take care of routine concerns.

We are in the dark side of the Moon — the end of the lunar cycle.  It’s a good time to wrap up projects started a few weeks ago, if you haven’t wrapped them all up already before adjourning for the end-of-the-year holiday break.  Cooperative connections between the Sun (life force; ego expression) and Mercury (mindset; communication) and Mars (action) and Neptune (vision; inspiration) offer plenty of productive potential for Mercury “RE” projects: REpair, REvise, REsearch, REconnect, REorganize, etc.

The New Moon begins at 1:53AM ET on THURSDAY at 7 degrees of Capricorn. Its enterprising drive may be accompanied by quite a jolt, vision or scandal. Why? First, Uranus turns direct on Thursday at 4:29AM ET. Uranus refers to revolutions, seismic events, rebellion, innovation, genetic mutation, accidents, aviation, space travel, technology, astrology, uranium, rocket scientists, mad scientists, lightning and genius, to name a few. So we may see movement in the headlines on these areas  — and in fact, we already have.  On the 25th, a 7.6 quake in Chile made news.

Also on the 25th: a Russian military aircraft whose passengers included 64 members of “the famed Alexandrov military music ensemble”disappeared off the radar two minutes after take-off at 5:25AM in Sochi and apparently crashed in the Black Sea. Hmm…military and music…symbolized by Mars and Neptune, respectively. These two planets will be at an exact meet-up in Pisces on January 1st. Currently they are separated by the South Node, which can suggest destruction. I had to look up the chart for the plane’s departure — wasn’t surprised to see this trio right at the bottom. No astrologer would choose this time for a successful launch. 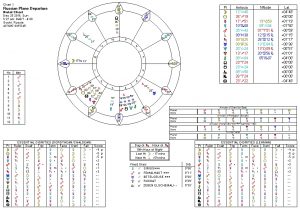 UPDATE: on Queen Elizabeth. Back in April and June we noted the potential for a break-up or fresh start for Her Majesty in 2016 until February of 2017, as transiting Uranus shakes up her enterprising Capricorn Ascendant. The Brexit break-up would reflect this potential — and how intriguing it is to read a BBC reporter’s claim that a source told her that the Queen supported it. Of course, with Mercury retrograde (and other planetary patterns currently in effect), one is wise to be a bit skeptical of what makes headlines.

In other news, Merriam-Webster declared “surreal” to be the defining word for 2016. How very Saturn (reality) square Neptune (meltdown of whatever it touches), which was 2016’s defining planetary pattern.   Dictionary.com voted for “xenophobia” — another astrologically apt reflection. Fear (Saturn) of foreigners (Sagittarius), amplified irrationally by the Neptune in Pisces challenge. Astrology is amazing. I predict the words for 2017 will reflect the spectacular windfall potential of Jupiter square Uranus, mixed with Saturn  trine Uranus. Have to think about what those words might be. Any ideas?

I’ve been meaning to look at Dan Rather’s horoscope for a few months, given the buzz his beautifully written posts have generated on Facebook. The legendary journalist celebrated his 85th birthday on October 31st. He’s a Scorpio with Moon in Cancer; Taurus rising. So he needs to use his depth and substance in ways that establish emotional and home(land) security, and be seen as a steady rock of material comfort. He was born in 1931 — during revolutionary Uranus in Aries square Pluto in Cancer. This year, transiting Pluto and Uranus made contact with his natal Uranus and Pluto, suggesting opportunity for a radical breakout and/or transformation in his professional status and his connection with the public (or a significant other). And behold, he has become a comforting Facebook sensation. Coincidence or conspiracy?

RIP, George Michael. Your untimely passing at the tender age of 53 has dominated headlines all week, sadly reflecting planetary patterns suggesting upsets, music and other intangibles….

Got a burning question about your potential in 2017? I’m all ears! Here’s how to order a report or schedule a personal consultation.