Tag Archive for: mars at 27 scorpio

It’s been a while since we covered the news, so let’s do it.

Plus, I can write while tracking Santa’s trek around the world, courtesy of Norad’s Santa Tracker. Ho, ho, ho!!! Also inspiring: “Good King Wenceslas,” performed by The Roches — along with their entire Christmas concert from 1990 — and what I wouldn’t give to be caroling right now. Damn you, Omicron!

Let’s start with a recap of the forecast for the weekend:

If you’re not taking Monday off, there’s no Moon void to excuse any oversleeping.

…which has been an avalanche over the past few weeks, hasn’t it? In no particular order, we’ve seen:

I can’t remember who said this to me a couple of weeks ago, but I found it insightful — and comforting.  “Covid wants to live,” they said, “and if it keeps killing its hosts, it won’t survive. Therefore, we should expect Covid to evolve into a form that is annoying, not fatal.” What do you think?

December 9th – 17th was an active time because Mars and Jupiter were at 27 degrees of Scorpio and Aquarius, respectively. Any planet at those degrees activates the reeeeeeallly long lunar eclipse we had at 27 Taurus-Scorpio on November 19th. Thus, anyone with significant planets at 27 degrees Taurus, Leo, Scorpio, and Aquarius could have been thrust into the spotlight, as follows:

Another horoscope activated by a recent eclipse was Reality Winner, first discussed here back in 2017. You may recall that Winner was given the harshest sentence ever for leaking an intelligence report — about Russian interference in the 2016 U.S. elections. She was released in June and on December 5th, the day after the New Moon in Sagittarius eclipsed her 12 Sagittarius Sun, she was interviewed by 60 Minutes — and here’s the video, if you missed it. Mars will trigger that eclipse on New Year’s Eve, and Jupiter will trigger it at the end of February. Let’s see how she makes headlines then.

Venus in Capricorn conjunct Pluto suggests women, money, art, and social expression in the EXTREME. Pluto can make it feel like a matter of life and death.

Avid Readers will recall that obituaries reflect planetary patterns. Here we have a sampling of Venus-Pluto in Capricorn, combined with the disruptive potential of Saturn square Uranus:

Merry Christmas to all! And to all, a good night! 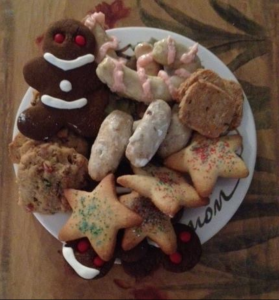