The intuitive, empathic Pisces Moon has been void since 3:19AM ET; it won’t shift gears into me-me-me Aries until 4:40 PM ET. Go with the flow; stick to routine and chill. A Moon void suggests an opportunity for you to wake up to the smell of gas, courtesy of the cat jumping on the stove in the middle of the night. You might also dump fresh-ground coffee into the Melitta brewing-thingy, without lining said thingy with a paper filter (caught myself just in time). Anyone else have odd twists and flakes to report?

Emotions may be on the rise, reflecting the waxing Moon. The Full Moon will be exact on THURSDAY (tomorrow) at 2:40PM ET. The Sun will be at 12 Libra; the Moon will be at 12 Aries. Both will square Pluto — and also the U.S. Cancer Sun. What illiumination and power plays shall we receive in the aftermath?

Speaking of Pluto (power; breakdown; transformation), when we run the Full Moon chart set for Washington D.C., we see Pluto at 16 Capricorn — exact exact exact on a 16 Capricorn Ascendant. That seems significant. It is where the New Moon will fall on January 16 2018. We’ll see if there is a connection between what is brought to light in this Full Moon and what seeds are planted at the start of the year. 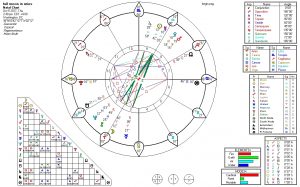 The Sabian Symbols for the Full Moon are — for the Aries Moon: “an unsuccessful bomb explosion”; for the Libra Sun: “children blowing up soap bubbles.” Sabian Symbol guru  Blain Bovee suggests we apply these Symbols with a mind to “attempting to contain delicate but explosive situations….hollow threats…bubbling sounds…remarks that blow up in your face…extreme expressions of gaiety and doom; frivolity and seriousness…a big show for a little result.” OK. Let’s watch.

Also happening tomorrow: Venus meets up with Mars in Virgo at 12:53 PM ET, just before the Full Moon. The Sabian Symbol for this meet-up of yin with yang; social expression with action is “an automobile caravan.” Bovee writes that this Symbol suggests a line-up of selves who are in full command of his/her mobility. Having achieved a level of self-mastery, we are invited to consider these two questions: 1) “if you have mastered your own power, why follow others?” and 2) “If you have mastered your own power, why not join with others so that even more can be accomplished?” Let’s see how these questions play out in the news. Meanwhile, you are personally affected by this meet-up if you have a planet or angle around 19 degrees of Virgo, Gemini, Sagittarius and/or Pisces.

Thanks to Avid Reader Jane, who emailed me the time of the Wretched Incident in Las Vegas: 10:08 PM on October 1, 2017.  There are heavy planets making contact with the angles of the chart — Saturn and Mars — just as anticipated.  Note that in the horoscope of the U.S., transiting Saturn and Mars are in a heavy connection with the U.S. Mars-Neptune square. Translation: outburst and reality check  (Saturn) on the America’s idealization of guns (Mars square Neptune). 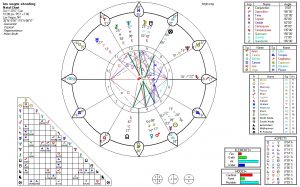 UPDATE: it is being reported that Stephen Paddock was prescribed anti-anxiety meds in June. That would be consistent with the second hit of transiting Saturn squaring his (likely 22 degree Pisces) Mercury, suggesting potential depression and other heavy thoughts — noted here on Monday. One of the side effects of those meds is aggression.

UPDATE: Jimmy Kimmel continues to reflect the persuasive and empowered action potential suggested in his horoscope — noted here last month. First it was health care; now it is gun control. He is from Las Vegas. Here is his opening monologue from Monday night.

As if Monday weren’t wretched enough, music legend Tom Petty passed away (after much confusion over his actual status). Cause of death: cardiac arrest. We do not have a birth time for Mr. Petty, but we can still see in what we do know how this awful event could have triggered. Mr. Petty has a Mars-Saturn square in his horoscope, and his natal Mars at 17 Sagittarius was exactly squared by transiting Mars at 17 Virgo on Sunday. Mars to Mars suggests a release of energy.

In the language of astrology, the heart is symbolized by the Sun. Last week Mr. Petty had the 3rd hit of transiting Jupiter conjunct his 26 degree Libra Sun. Jupiter expands whatever it touches, for better of for worse. So yes, Mr. Petty had an expansive and presumably rewarding summer touring the country. Last week he played at the Hollywood Bowl and I wish I had been there to see it. But expansive is not always beneficial in matters of the heart, especially if the Sun in the horoscope is under pressure from other patterns (as it was when Justice Antonin Scalia passed away last year). In Mr. Petty’s case, we see transiting Uranus will make its second exact opposition to his Libra Sun on October 14th. Uranus refers to electricity, shock and disruption.

Here are links to “14 Essential Tracks” by Tom Petty, compiled by the New York Times.  They are timeless.

Meanwhile, reflecting the potential of Venus (art, women, money) in harmony with  Pluto (empowerment) in earthy Virgo and Capricorn, respectively, we find “Nude Sculpture Four Stories Tall Planned for National Mall.” The sculpture is of a woman in yoga pose called “Mountain.” There’s your earth.

While “nude” may be a tasteful expression for Virgo, it seems that suggestive block forms are not. Virgo can take its need for discernment to downright prissiness. Here is that potential “chastity” of Venus and Mars meeting up in Virgo (exact tomorrow): “Louvre Pulls Sculpture, Saying It Was Sexually Explicit.” You be the judge.

Thank you for reading this forecast. If you are curious to know how these patterns are meaningful in your own horoscope…or you want to learn the many other ways astrology can be used as a tool for living life better, here’s how to contact me.