The work week began with the Moon in Cancer, suggesting a need to focus on home and family concerns involving emotional security. The only exact aspect on Monday was a meet-up between the Sun and a seriously hungover Mercury in Pisces, struggling to recover from its binge with delusional Neptune early Saturday morning. The meet-up with the Sun suggests idealistic thinking — with reason tossed in the nearest dustbin.

On TUESDAY the sensitive Cancer Moon is well-supported in the morning and early afternoon, so that’s the time to connect with your fellow humans. Tensions rise after lunch ET, and we may experience power plays and upsets in a big way between 4:28 PM ET and 10:33 PM ET, when the Moon makes its weekly clash with Pluto, Jupiter and rebel Uranus.  An extra dose of dirt made be dug up as well, given that Mercury will be in harmony with investigative Pluto at 12:23 AM ET on WEDNESDAY.  Give us what you’ve got, WaPo and NYT.

Moon will be void on Wednesday between 9:59 AM and 11:45 AM ET. This reflects whatever twist or flake you may experience, which may come with a provocative outburst at no extra charge, given that the Moon void begins on a challenge from Mars.  The rest of the day (after 11:45 AM ET) will be driven by the Moon in love-love-me-do Leo, looking for ways to shine and — if we all play nice — to help others shine, too.  An easy connection between the Sun and Pluto in the wee hours (3:29 AM ET) on THURSDAY may be a blessing for regal types and other Powers That Be. This aspect facilitates corporate deals in the energy sector, FYI.

Big news on Thursday is action hero Mars, leaving the race track of Aries (its home sign) for the calmer pastures of Taurus. Stripped of the speed it enjoys while charging through Aries, Mars in Taurus compensates with stubborn, bull-dozing persistence. Mars will be in Taurus until April 21st.

After a productive morning on FRIDAY, the Leo Moon goes void on FRIDAY at 12:05 PM ET, suggesting an opportunity to skip out early for the weekend. Guess who left town last Friday for some down time in Florida, five minutes after the Taurus Moon went void at 10:20 AM ET. Coincidence or conspiracy?

Moon enters Virgo at 5:07 PM ET on Friday, in search of the perfect Manhattan. A need for sorting, organizing and making things right drives the whole weekend, which includes a Full Moon on SUNDAY at 10:54 AM ET. This is a significant Full Moon as it impacts all the newsmakers who have key planets around 22 degrees of Gemini, Sagittarius, Virgo and Pisces. More on that later this week.

Meanwhile, you all know Venus is now retrograde, right? I want to talk about a few news items in this post, so please refer to this post from 2015 for general coping strategies on Venus.  This Venus Rx began at 13 degrees of Aries, so if you have a planet or angle around that degree, you’re special. Look at your horoscope and see where 27 degrees of Pisces through 13 degrees of Aries falls. This is the area of your life where you may have an opportunity to REview what/whom and how you love. Do they inspire you? Do they reflect who you are when you are being true to your adorable self? Why or why not? Venus turns direct on April 15th.

If you haven’t the foggiest idea what’s going on in your horoscope, it’s high time you scheduled a consultation. Here’s how to contact me.

And now, some news.

Here’s what I posted for last Tuesday:

Does anyone remember what happened last Tuesday night in Washington? P45 gave a speech to Congress, with assistance from a teleprompter. It was declared a rousing success, with more input from the rose-colored glasses provided by the Sun’s annual meet-up with pixie-dusted Neptune. Then all hell broke loose on Wednesday (as predicted) and Attorney General Jeff Sessions was all anyone could talk about because he appears to have lied to Congress about having had conversations with the Russian ambassador. Wow! You’re probably wondering if Neptune is in contact with many planets in Mr. Sessions’ horoscope (no birth time available). It is.

Neptune is also in contact with a key planet in P45’s horoscope, too. And this key planet would be Mercury, whose condition suggests how he needs to think. Inspiring, visionary and intuitive? Potentially. And also potentially indulgent when it comes to alternative facts. Was it intuition, I wonder, that prompted him to send out a false, yet sensational tweet at 6:35AM ET that totally pulled focus away from Attorney General Sessions’ fine kettle of fish for the rest of the weekend? Look at the chart for the tweet: 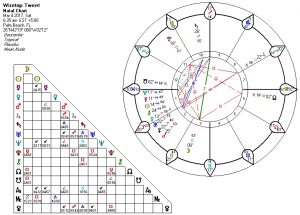 Neptune and Mercury in Pisces rising, exact on a Pisces Ascendant. Total fog. Moon running wild in blah blah blah Gemini, in the 3rd House of more blah blah blah, obsessively seeking public status. What planet is ruling the 3rd House of communication and mindset? Venus in me-me-me Aries, at a dead stop and not at all inclined to mind its manners. So if you wanted to pick a moment in advance to send out a total fabrication that would attract a ton of attention, this would be an apt time to do it. Fun Fact: the Moon at 0 Gemini is conjunct former President Obama’s Moon at 3 Gemini. Astrology is amazing.

As it turns out, the writers at SNL kept their focus on actual news. Kate McKinnon gave an encore performance as Jeff Sessions in the show’s cold open. Ms. McKinnon is a Capricorn whose Sun has been supercharged by Uranus and Pluto over the past two years. Breakout star? Personal empowerment? Ooh — and get this: in  her horoscope, she has Mercury with Neptune — at the Aries Point! What a useful pattern to have for an actress who is winning accolades pretending to be other famous people. There’s a place for illusion, doncha’ know….

Speaking of President Obama, events in his life are currently reflecting the powerful reward potential suggested by a pattern influencing career, honors, publishing and popularity.  He’ll be receiving the 2017 John F. Kennedy Presidential Medal of Courage; just scored a $60 million book deal; enjoyed a month-long vacation and founded a new venture. I expect he’ll be cooking with gas in the middle of 2018 and on. Fun Fact: P45 had this powerful reward pattern (among others) all last year. What’s going on in your horoscope?

I have a laundry list of other news items that have nothing to do with politics, but still are in astonishing synchronicity with planetary patterns. I hope to share them soon.