Tag Archive for: jupiter trine neptune in the news dec 2017

Up and at ’em, with the gentle reminder that Mercury is retrograde. Here is the Survival Guide, if you need a refresher:

Mercury—which in the language of astrology refers to mindset, travel and communication—will appear to move backward through the sky until December 22nd. It’s not really moving backward, but that is how it looks from our perspective here on Spaceship Earth. Mercury goes retrograde 3-4 times each year, for a period of 22 days.

This Mercury retrograde happens at 29 degrees of Sagittarius, suggesting that whatever is up for REview and RElaxation likely involves an expansive quest for vision and truth, as old opinions and beliefs are RE-evaluated. Watch areas involving the judiciary, sports, media, religion and foreign affairs. If you have a planet or angle around 29 degrees of Gemini, Pisces, Sagittarius and especially Virgo, you are more personally affected by this particular Mercury retrograde. FUN FACT:  this month’s retrograde at 29 Sagittarius is likely to recall things that were hot during the Mercury Rx that began on August 30, 2016 — at 29 degrees of Virgo. Here’s a post from mid-September 2016 with a few examples. 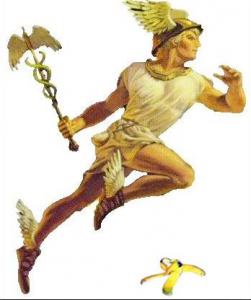 Back to today and the rest of the week. The information junkie Gemini Moon is opposed by Saturn and Mercury at 12:46 PM ET and 2:13 PM ET. Someone throws a wet blanket on someone’s parade, in an effort to take control. And then starts an argument about it. Chill during the brief Moon void…and shift your focus to matters of emotional/home/homeland security at 3:37 PM ET, when the Moon enters nurturing Cancer.

Wednesday is busy, as in heavy, provocative and action-packed. First, Mercury Rx re-connects with reality king Saturn. When it did that at the start of last week, Matt Lauer was pink-slipped. The nurturing Cancer Moon will be challenged by Uranus and Mars before lunch ET. Mercury Rx in sloppy Sag with harmonize with Mars in Libra, seeking fairness and balance; Mars will harmonize with Saturn at 4:21 PM ET, seeking an action plan that is pleasing, but still maintains control. Perhaps Congress will agree on a funding plan to avert a government shutdown on December 8th.

As we get closer to the weekend, Wednesday’s reality check fades in favor of the high-flying aesthetic dream suggested by SUNDAY’s exact patterns: a harmony between Mercury and rebel Uranus; a tension between Venus (women, money, art, social expression) and Neptune. Sounds like bitcoin to me. Meanwhile, Mars leaves Libra for Scorpio on SATURDAY. More on that in the next forecast.

Meanwhile, Saturn is barreling theough the last few degrees of Sagittarius, giving it prominence. In Sunday’s NYT magazine, Saturn was the subject of its Letter of Recommendation — with an entire paragraph about the wisdom of being mindful of first, second and third Saturn returns. Pigs have flown again!!

Elsewhere, on SNL, I saw a few topsies saucily asserting themselves (reflecting the potential of the Sabian Symbols for the Sunday’s Full Moon). Here’s “Welcome to Hell” — a music video awash in rose-colored Sun-square-Neptune pixie-dust — perfectly in sync with planetary patterns.

Today the Supreme Court will hear the case of the Colorado baker who said he was exercising his right to free speech and religious liberty when he refused to bake a cake for the wedding of two men. Well, that’s an apt case for Saturn (control) and Mercury (communication) at the end of Sagittarius (religion, judiciary, opinion). I found this intriguing quote from Justice Antonin Scalia in WaPo, suggesting that this is going to be an opinion about freedom of speech:

In a 1990 case, the justices said two Oregon men were not protected from being fired from their jobs as drug counselors because they had used an illegal drug, peyote, as part of their Native American religious ceremonies. The opinion by Justice Antonin Scalia in Employment Division v. Smith said a person may not use religious motivation as a reason not to obey a law generally applicable to the public and passed without animus to a specific religion. To find otherwise, Scalia wrote, would invite “a system in which each conscience is a law unto itself.”

Finally, as you may have heard, Senate Republicans passed their sloppy 500-page tax bill that no one had time to read, let alone have a committee hearing about. Amazing, given that there were over 30 hearings on Benghazi….none so far on the four soldiers killed in Niger…but…hey…priorities. The bill passed at 1:51 AM ET — during a Moon void (much ado about nothing?), a Mercury in sloppy Sagittarius stationary retrograde (subject to review) and a Neptune-Sun square (we’re so confused!). People were, in fact, so confused that they forgot that this bill is not law! Now the sloppy Senate bill needs to be reconciled with the sloppy House bill — and then and only then — and only if P45 decides to sign it — will whatever ends up in it, end up destroying the country.

Here’s the chart for the Senate tax bill — with the comfort and security-seeking Taurus Moon locked away  in the 8th House,  not able to do anything of consequence, as it is void. The Moon refers to the people. The 8th House is debt and taxes. Coincidence or conspiracy? 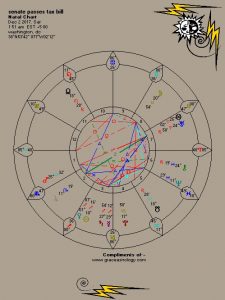 Now is the time to schedule a consultation and plan for 2018. Or give someone special the gift of a consultation or a personalized report. No carbon footprint! Insights to last a lifetime! Made in America! Etc.!