And heeeere we go again!

The Full Moon in Sagittarius happened at 4:31 AM ET and then went void until 12:13 PM ET. That’s your excuse for any flake or twist that may have disrupted your morning routine. But as of 12:13 PM ET, the Moon is now fully focused in Capricorn, seeking to take care of business no matter how it feels. The week rolls like this — and these patterns are all part of the release and illumination of this Full Moon, which challenges the Gemini Sun’s ability to present factual information, against the Sagittarius need to express an enthusiastic and/or bombastic opinion

Oh — almost forgot to mention the Sabian Symbols for this morning’s Full Moon. For the Moon: “A flag bearer.” For the Sun: “Winter frost in the woods.” The last time I wrote about this pair was…wait for it…ready? On the New Moon in Gemini on June 16, 2015 — that’s when P45 launched his election campaign — here’s the forecast for that day. Amazing.

Jupiter = big. Jupiter = publishing. Neptune = music. From Sunday’s NYT magazine: “Behind the Untold Story of the Universal Music Fire” — in which thousands of master recordings were apparently destroyed, and the artists are just learning about it now…

Neptune = toxins and plastics. The Guardian, having launched one investigative series called “Toxic America,” just launched a new one: “The United States of Plastic.”

Meanwhile, a random example of Saturn (reality) driven by illusion (Neptune): “They have millions of Instagram followers, but they’re not real people.” Instead they are computer-generated creations being used to promote various brands — presumably for less cost and risk of a human doing something scandalous that sullies the brand.

In other news, I  promised you last week that under this Jupiter-Neptune square we would hear stories of refugees sparking compassion, likely involving bad initiatives launched for the sake of homeland security (thank you, Mars in Cancer opposing Saturn in Capricorn).  Have you heard of Baby Constantin? He’s the subject of this NYT investigative story: “The Youngest Child Separated From His Family at the Border Was 4 Months Old.”

UPDATE: on Melania Trump, who made news on Friday in a special  CNN  report: “Woman of Mystery: Melania Trump.”  Of course she would be a woman of mystery, given her natal Neptune opposing her Venus and Mars. That’s a potentially glamorous, sexy and enigmatic combination. Bill Clinton has a similar pattern: Mars, Neptune and Venus right on his people-pleasing, conflict-avoiding Libra Ascendant. But why would that CNN special about Melania be airing now? Because — as noted here last year — Melania’s Taurus Sun is being supercharged by transiting Uranus right this minute — and will continue to be cattleprodded into early 2020. Break-outs and/or break-ups; either would apply.

With all the dreadful and bewildering stories making news, at the end of this day, the most-shared item on The Guardian (posted during the morning’s Moon void) was this: “Accidental cat filter appears on Pakistan official’s briefing.”   Enjoy!

Is your horoscope scheduled for a potential break-out or break-up? If so, life will be easier if you are prepared to channel that buzz of excitement — or manage any surprise that may be in store. Here’s the 411 on personal consultations. 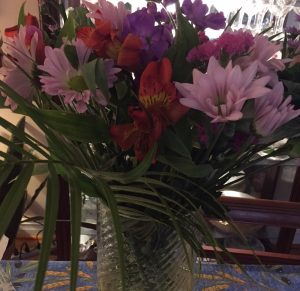