The work week begins with exuberance, driven by the Moon in high-flying Sagittarius. Sag is a sign that needs to tell the world its opinion on everything, with the more boundaries pushed, the better. Why just look at all of the opinions flying out of the Supreme Court!

Today could lift your spirits higher than the weekend’s moody bastard Moon in Scorpio.  Or it may add hot air to a simmering situation. When the Moon is in Sag, consider thinking outside the box;  take a walk in the woods; take in a foreign film — anything that allows you to consider collective beliefs outside your usual comfort zone. And get it off your desk today, as the Sag Moon goes void tomorrow (TUESDAY) at 8:54 AM ET, not to enter the next sign — Capricorn — until 11:52 AM ET on WEDNESDAY.

Avid Readers know that Moon voids are excellent for taking care of routine concerns and not making mountains of crises out of a molehill. Here is Avid Reader Pam, who writes about her experience last Friday, when the Libra Moon was void between 6:34 PM PT and 12:11 PM PT (she’s on the West Coast, hence the Pacific Time Zone):

So.  I want to report an extreme case of moon void drama:

This morning I attempted to turn on my computer as I do every week day.  NOTHING.  And more nothing.  PANIC in my heart.  (though I use drop box and every document is instantly backed up)  Still.  WTF.  I tell myself the moon is void – Elisabeth says, “much ado about nothing.”  I pray the wisdom holds true.  I’ll spare you the various attempts and calls.  Finally, I get the number of a PC repair guy.  He said, “If you’re getting a blinking light, it’s got to be the mother board.”  Heart sinks deeper.  My hubby looks online and suggests that we remove the battery.  We do.  I hold my breath and press the button.  I hear noises.  ET VOILA!   I look at the clock:  12:26, just a few minutes past the mood void.  I called the PC repair guy back and let him know.  We have ordered a new battery from amazon and it will be here in a day.  Meanwhile, I’ll use the computer without the battery (and it’s lighter).

Much Ado About Nothing, indeed!

Thank you, Avid Reader Pam!  Your other Moon voids this week are FRIDAY 4:57 AM ET until 12:37 AM ET on SATURDAY — suggesting another day to skip out of the office early for the weekend.

HOWEVER, the biggest shift this week is MARS, planets of action, anger and assertion. It turns retrograde on TUESDAY at 5:05 PM ET…moving backwards through the heavens (from our vantage point on Earth) until August 27th. We experience Mars retrogrades “every two years or so,” according to an official NASA site — which also offers a nifty animation explaining why planets seem to be moving backwards in the sky from our point of view.

Retrograde planets symbolize an opportunity for introspection and review. They may also suggest a need to connect with an inner authority, as opposed to an external outlet.

As the planet of action, you might imagine that Mars moving backwards is not a comfortable orientation. Thus you may notice an uptick in the levels of irritation, impatience and frustration between now and August 27th. Projects you thought were good to go after May 12th may hit an unexpected snag, as Mars backtracks over the ground it covered since then. Initially the issues involved may include  freedom, rebellion, humanitarianism, technology, aviation, astrology, social networks and unconventional attraction.  Why? Because Mars is retrograding in Aquarius. On August 13th,  Mars will back into Capricorn. Then we may note a shift to matters of corporations and other Establishment/patriarchal concerns. Whatever the hitch, bear in mind that there may be a second opportunity for a revision when Mars finally moves forward. We won’t get into new territory  until Mars  it hits 10 degrees of Aquarius on October 10th.

Wherever Mars is traveling through your horoscope, it may feel like a truck spinning its wheels in the mud.  It can generate a LOT of heat. Frustration built up can lead to an urge to jump into reckless action. This is a potential pitfall of Mars retrograde. You are more personally affected if you have planets or angles at 9 degrees of  Aquarius, Taurus, Scorpio or Leo — and my money says you’ve been feeling the burn all month.

An appropriate use of Mars retrograde would be as an opportunity to plan an effective review and strategy in the area of your horoscope impacted. Think of a coach calling a time out on the playing field. Everyone gets into a huddle — literally turning inward.  Are those players sitting around doing nothing? No! But they are definitely not making any mad dashes on field.

That being said, conventional astrological wisdom suggests caution when contemplating launching certain initiatives during this time:

Notice that the operative word here is caution.  Sometimes life has other plans. When in doubt, consult your local astrologer about your own personal horoscope, which has a lot of moving parts!!

Now then. This particular Mars retrograde period is likely to be more volatile than usual. Why? Because, as noted here before, Mars is in a tense pattern with rebel Uranus all summer and into fall. That pattern (a square) will be exact for the second and third time on August 1st and September 18th, sparking whatever was going on around May 16th , which was the first square. Clear?

Not only that, but Mars will retrograde back and forth over the South Node on July 12th and October 4th. The first one in this series happened on June 10th. The South Node is a point referring to discharge and destruction of patterns that no longer serve (and may be toxic). What stories were making headlines around June 10th? I don’t know — go back and re-read these forecasts. Point is, we’re likely to see an advance on those stories around July 12th and October 4th.

But wait — there’s more! July 12th is also a New Moon/solar eclipse…on a day with the Cancer Sun exactly opposed by Pluto.  I anticipate intense power plays, catharses and news from underground. A second eclipse on July 27th involves Mars in opposition to the Sun and conjunct the Moon.  It’s just all so…oh…what is the word here….interesting…and also potentially volatile. The upside potential is a summer of breakthroughs. And you get to be a part of all of it — huzzah!.

When was the last time you consulted with your astrologer? If it’s been over a year, you’re overdue. Planetary patterns between now and the end of the year pose unique challenges, and my money says you will benefit from understanding what it means for your unique horoscope. We’ve got Mars going retrograde next week…three eclipses in July and August…a Mercury retrograde and a Venus retrograde to navigate. Here is the 411 on consultations.If you just want to know how Mars retrograde is likely to manifest in your horoscope, I will send you a personalized write-up for $48.88. Please send your birth data here if I do not already have it. Here’s to your continued enlightenment!

Saturday’s opposition between Mercury and Pluto boded well for investigative journalism and no holds barred communication. The Sunday NYT magazine did not disappoint. “All the Right People: How one conservative think tank stocked the federal government for the Trump era”   The think tank in question is the Heritage Foundation and this article is a must-read.  It is fascinating to note that the horoscopes of its recently ousted leader (Jim DeMint) and his replacement (Kay Coles James) are being activated now. Jim DeMint has Mars at 9 Leo, along with a Jupiter-Uranus square that is making a disruptive contact to the Sun-Saturn square of the United States. Read the article and marvel how he applied that shake-up potential. Birth data for DeMint: Sep 2 1951 in Greenville, SC. For Ms. James: Jun 1 1949.  In her horoscope, Neptune is engaged with the US Sun-Saturn square, while her Venus at  22 degree Gemini (activated by the recent 22 degree Gemini New Moon) is engaged with the U.S. Mars-Neptune square. She can’t help but love all that the US Mars-Neptune square suggests.

The other big feature in the NYT magazine was built on #MeToo, as anticipated: “Should Statutes of Limitations for Rape Be Abolished?”.   “Across the country, time-limiting laws prevent scores of sexual assault cases from being prosecuted, in spite of persuasive evidence or a confession,” the article begins.  Elsewhere, social media was abuzz when a Walgreen’s customer reported that a pharmacist refused to fill a prescription for meds that would have terminated her unviable pregnancy. “Unviable” here means there was no fetal heartbeat. Yet another woman denied service was Sarah Huckabee Sanders, who was asked to leave a restaurant “on moral grounds.” File that one under “I told you so,” and be prepared for continued disruptions involving the press secretary’s social expression, values and aesthetics through 2018.

Also revealed: a young French woman took a jog along the beach and unknowingly crossed into the U.S. from Canada, where she had traveled to visit her mother.  Like many joggers, it did not occur to her to carry her passport or any other identification. She was stopped by U.S. Border Patrol, searched and then held captive for two weeks.  Reading the article in WaPo, for  the life of me I could not figure out why Border Patrol would treat a woman jogger from France so harshly, until I saw her photo in another publication. How times have changed since 1999, when a friend and I flew to Vancouver for a weekend getaway. My friend forgot to bring her drivers license — silly rabbit — and what do you think the Canadian immigration officials did? They noted her name, address and the fact that she had a return ticket to fly back to LA in two days — and  then they let her into the country. No problem at all returning home to the U.S., either.  Gosh how I miss those days of innocence….

And if you’re free  tonight at 9:30 PM ET/6:30 PM ET, please  tune in for another exciting episode of COSMIC TUESDAYS — which inexplicably airs on Mondays, but is no less cosmic. It’s always fun to talk shop with host Anthony Picco, and if you join the chat room, you can ask questions, too. Here’s the 411: 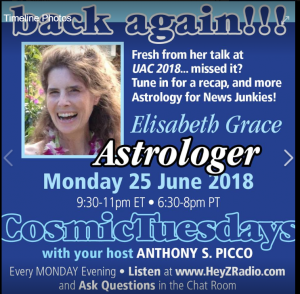