The Pisces Moon is void this morning between 9:54 AM ET and 12:35 PM ET. See if you notice how the energy shifts this afternoon — from a need for empathy and ideals to the Aries Moon’s need for me-me-me  — not now, but RIGHT NOW. Its action-oriented drive may be tempered by a authoritarian challenge around 5:37 PM ET, when the Moon is squared by Saturn. On WEDNESDAY, the need for initiative charges ahead without interference.

THURSDAY offers a few pushes and shoves, as the Moon squares Pluto at 12:53 AM ET (power play/catharsis time), with more to come around 7 PM ET, as the Aries Moon opposes Venus in Libra (“me” vs. “we”) and squares Mars in Capricorn (“just get it done!”). Chill during a two and a half hour Moon void. Moon enters Taurus at 9:30 PM ET, seeking material comfort and security. That need may be disrupted around 1:50 AM ET on FRIDAY, as the Moon makes its weekly hard aspect to Uranus.

Other than today’s last of three squares between Mercury (mindset, communication) and Jupiter (big!!) at 1:31 AM ET, there are no other exact aspects among the planets, except to the Moon. Anything goes! But please go slowly, as Mars (action, assertion, aggression) has only just turned direct (yesterday at 10:05 AM ET).

Avid Readers may enjoy a Labor Day weekend relatively free from planetary challenges, brought to you mostly by the pleasure-seeking Taurus Moon on Friday and Saturday. On SUNDAY, Moon enters information junkie Gemini at 4:02 AM ET,  and will be close to a meet-up with Barack Obama’s Gemini Moon as he eulogizes Senator John McCain. Sweetness and cooperation in communication and social expression is likely to be noticeable as we get closer to the weekend and MONDAY’s harmony between Mercury and Venus, exact at 8:38 AM ET. George W. Bush — who has also been asked to deliver a eulogy — will benefit from the suggested social grace and rose-colored vision.

“Reaching across the aisle” is one potential of the weekend’s alignment among Sun, Saturn (old guard) and Uranus (avant garde). And this is how some are remembering John McCain, as in this clip from NBC News: “John McCain’s Legacy of Reaching Across the Aisle.”   In a letter to America, dictated before he died, McCain encourages us to appreciate what we have in common and place those unifying bonds above all else.

Here is John McCain’s horoscope:  perfectionist Virgo Sun driven by a humanitarian/maverick-y Moon in Aquarius. Needs to be seen as empathetic and visionary, suggested by a Pisces Ascendant. Saturn in Pisces is in an obsessive relationship with that Virgo Sun, suggesting a need for obsessive-compulsion in matters of authority, discipline, obligation. Astrologer Michael Lutin once said that Saturn in Pisces needs to turn suffering into an art form. And this is interesting because Saturn in Pisces is right there in the First House — so clearly part of the image he needs to present to the world. Most people know that John McCain survived five years of torture as a prisoner of war in Vietnam. He wrote about that experience in the early ’70s, here.  I thought about the planetary patterns he would have had during that anguished period. Probably a conjunction, square or opposition from Pluto to his natal Saturn. And in fact, that’s what he had.

Contrary to the obsessive discipline of his Sun-Saturn relationship, his Aquarius Moon is challenged by rebel Uranus and opposed by intensely potent Pluto. That T-square suggests a need for freedom and for deep dramatic expression. Add more drama courtesy of a regally entitled Mars in Leo (that can get away with murder), in harmony with a boundary-pushing Jupiter in Sagittarius. This Mars-Jupiter alignment suggests strong potential for vitality, with Mars placed in the 6th house of health and “the body politic.” Toss in a bit of streamlined conservatism, suggested by an opposition between Saturn and Venus in hypercritical Virgo.

His T-square among Moon, Uranus and Pluto has been hit more than once by this summer’s Mars-Uranus square. Last week, transiting Mars stationed opposite McCain’s Pluto, suggesting empowering effort in matters of values and self-worth, heard around the world. His final “letter to America” linked above would be one manifestation. As for his visionary/mythic projection, his Venus at 23 Virgo is square to Chiron (the wounded healer) at 22 Gemini. It sits right on top of the Mars-Neptune square in the U.S. horoscope. So his values and social expression are going to grok with the U.S. romance with cowboys and guns. It’s amazing how many who hold powerful government positions in this country have planets in their horoscopes that are connected to that pattern in our national horoscope.

Regarding the maple trees. My plea to my friend on the co-op board made an impact. The next day, as I was in full-blown community organizer mode, I received a text that the planned tree removal had been put on hold — to be “revisited.” I was thrilled that the trees had earned at least a temporary reprieve, but did not feel for a minute that my work was done. And it wasn’t. Stay tuned, and I’ll tell you what happened next.

Meanwhile, astrologer Bill Herbst has been on a roll this summer, churning out essay after essay in his own brand of brilliance. Avid Readers may recall that I credit Bill for igniting my passion for mundane astrology — i.e., the study of planetary cycles and how they are reflected in world events. Who turned me on to Bill? Rockie Gardiner, who used to write her Rockie Horoscope for LA Weekly. When Rockie passed away in 2008, I missed her forecast terribly — which prompted me to start writing what you’re reading now.

In other news, last Friday (when the Moon was in Aquarius and the Sun in harmony with Saturn and Uranus), I went to see Maison du Bonheur, a documentary about Parisian astrologer Juliane Sellam. The filmmaker was also there for a post-screening Q & A, and I can’t tell you how refreshing it was to hear her speak about her subject (Mme. Sellam) in glowing terms, praising her brilliance and generous spirit. It goes against the mainstream stereotype of astrologers as “woo-woo,” etc. That’s Mme. Sellam, pictured below. 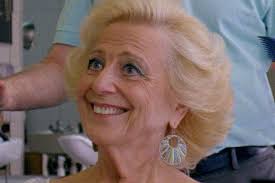