True story from yesterday’s Moon void, which occurred between 12:33 PM ET until 5:43 PM ET. Avid Reader Jane accidentally doublebooked her 1PM appt. Two clients came at the same time and she had to decide which one she would need to reschedule. Yikes! Then her 3:15 PM appt showed up at 3:45 PM — without a word of apology or acknowledgment about her tardiness. How rude, right? Turned out that this client thought her appt WAS at 3:45PM — she thought she was exactly on time — d’oh!!!  An awareness that the Moon was void helped Jane react appropriately to the “crisis” at hand  — i.e., not to turn a molehill into a mountain. She rolled with the twists and her life is stress-free as a result. Word!

Since 5:43 PM ET on Tuesday, the Moon has been in Capricorn, driving the day with an ambitious need for action. Look at the headlines and you can see that happening — as anticipated at the start of the week.  An especially steaming and prominent Mars — the symbol of action — is at the very end of Pisces,  adding to the push. It’s colored by the potentially steely or just plain cold & cruel square between Saturn in Sagittarius and Venus in Pisces, exact on Friday at 12:50PM ET.

Venus challenged by Saturn can put a stern face — literally — on matters ruled by Venus: women, art money, social expression.  Remember the “bitchy resting face” that first made headlines a few years ago? That was on another Venus-Saturn square — and noted in this forecast.  In this Venus-Saturn square, Venus is in Pisces, symbolizing empathy, vulnerability, compassion. Saturn in Sagittarius suggests a block or structure to Venus’s expression — in the form of controls based on righteous belief systems.

Is that good or bad? That depends on you. Here in the U.S., the new administration wasted no time reinstating a global gag rule that prohibits U.S. funded NGOs from providing services for — or even mentioning — abortion. Imposing controls on  vulnerable women based on a righteous belief — Venus squared by Saturn. In contrast, The Netherlands announced that it would establish an international fund for such services, countering the global gag rule. Ambitious financing program with an international reach, suggesting a compassionate approach to a women’s issue — based on a righteous belief. Venus squared by Saturn! You can decide which one is good or bad. Planetary patterns have no opinions whatsoever.

If you have a planet or angle around 24 degrees of Gemini, Virgo and especially Sag and Pisces, you are more personally affected by the steely resolve — or cuts —  of Venus squared by Saturn. Consult your local astrologer for details.

First, as promised —  the chart for the inauguration of the 45th president. What does it suggest? 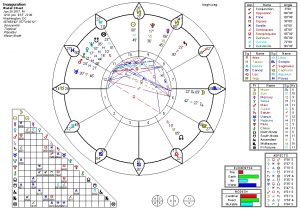 There’s the Sun — the essential ego energy — right at the top of the chart in Aquarius. Keywords for Aquarius are humanitarian, eccentric, fringe, innovative, genius — that’s a partial list and experience will prove which ones apply. This Sun is not connected to anything else in the chart — and this is significant. It’s just highly visible — the only truly visible planet in the chart, frankly — and it needs to attract a ton of attention for its unique social significance. We can see the potential for it to be isolated and out of step. This potential is echoed in minor patterns (midpoints) linking the Sun to other planets — in pictures suggesting optimism — but mostly acting as a free agent — and not as satisfied as one might expect.  Cue Gilbert O’Sullivan now, please. With this chart, “Alone Again — Naturally” may have been a more fitting inaugural song than “My Way.”

What needs are driving this chart? The Moon in Scorpio — seeking to fulfill its need to be seen as something of depth and control. It is planted in the daily processes of work and other routines — reaching out to control communication, mindset, home,  homeland security and family/core foundation concerns. The only planet the Moon is looking to connect with is Neptune, suggesting these potentials: vision, dream, fantasy, healing, deception, faith, drugs, oil. Moon in Scorpio can certainly be loyal, operating on its own honor code. It can also be waspish and vindictive. Not a happy place for the Moon in an event horoscope, say the traditional teachings of astrology. Especially when we notice a connection to the Moon from Mars and Saturn, suggesting potential moodiness, loss and depression.

The chart has a Taurus Ascendant, suggesting a need to present an image of material comfort and security — perhaps by building a monument symbolizing those Moon in Scorpio controlling needs.  How about a big wall? Venus (money, women, art, social expression) is strongly placed in Pisces — but is sorely challenged by Saturn. This Venus-Saturn square is the second of three patterns that the energy of this event is moving toward. Ambitious and strategic in social expression, perhaps — but chilly. No love lost here. Also of interest about this strongly placed — but challenged — Venus: a connection to Mars and Neptune that suggests a bedazzling magnetism — for better or worse.

A third aspect this event is moving toward is a harmony between Mercury (mindset; communication) and Neptune. This is a strong suggestion of rose-colored glasses, vision, idealism and/or alternative facts. So…in the context of this particular presidency, we would be advised to take whatever is said with a grain of salt. Especially when we notice that this Mercury in the chart is also connected to Saturn and Pluto, two planets suggesting possible hardcore realism and anguish.

The man who now works in the Oval Office has a square between Mercury and Neptune in his horoscope, along with a meet-up between Venus and Saturn. Isn’t it interesting that his horoscope reflects some of the patterns we see in this inauguration chart?

Other observations, in no particular order. If this were a person’s horoscope, I’d expect him to have a need to shake up the system — bigly — with a know-it-all, militant approach. The placement of Pluto in this horoscope suggests a need to mix and mingle with the Powers That Be. Another measurement suggests success with ventures involving those with power and resources — no worries at all in that regard.

Keep the analysis of this chart in mind when reading headlines this week about building walls, keeping foreigners out, issuing gag orders, freezing hiring and research grants at government agencies, deleting White House webpages about climate change and civil rights, pulling out of the TPP and possibly NAFTA and the UN. Can you see how these actions reflect the potential in the chart? Also consider these actions: defending “alternative facts” and other flat-out lies — to the point where the mainstream media is finally saying that the lies are lies.

Compared to the chart for the 115th Congress, I would argue that the inaugural chart is ultimately less potent, given that it is on a waning Moon, whereas the 115th Congress chart is a waxing Moon — something that needs to grow. And then I think back to January 2011, when I first wrote about the chart for a new Congress and observed (to myself), that it didn’t look as if Congress would be able to act effectively until 2017. Is that good or bad? Hmm. Any questions?

Obviously, we could continue to talk about this political stuff, but let’s move on.

Random observation about the stock market — given that the Dow broke 20,000 today. In late 2014 I spent time looking at some bubbles that coincided with challenging patterns between Saturn (reality) and Neptune (surreal), which I wrote about in January of 2015.  I wondered if there was a pattern that coincided with the bubble bursting. And yes, there seemed to be one. Then I looked for when that pattern might occur in the aftermath of last year’s Saturn-Neptune square  — and I did not see it happening immediately. And I thought, “Really?” And now here we are at 20,000. Amazing.

[UPDATE: the pattern coinciding with a bubble bursting is a hard aspect between Saturn and Uranus. We’ll have a series of Saturn-Uranus squares starting in January 2021, with the first exact square on February 17, 2021 — and here’s how a bubble is bursting in the markets right now, on January 27, 2021. I didn’t call this pattern out directly back in 2014 and 2015, as I don’t think of myself as a financial astrologer and do not intend for these forecasts to be offering advice in that area. But I can’t say I’m disappointed to see a bubble bursting now, as anticipated. There are other patterns reflecting why the two stocks being manipulated now are entertainment companies. Astrology is amazing.]

In other Saturn-Venus news — and here I would be looking for a positive application of militant ambition that seeks to advance women, not control them — photos of Sunday’s women’s marches from around the world.  Together, they added up to the largest gathering of protesters ever — in history.  Here’s another item of gravitas: ten things you did not know about the clitoris — making headlines. Meanwhile, Chelsea Manning has a few thoughts on why a militant approach to solving problems is preferable to compromise. Here’s a piece on why women quit working — and it’s not for the reasons men do.

Another Venus-Saturn story — not uplifting, I’m afraid. Mary Tyler Moore has passed away — here is her horoscope — and you can see that her Midheaven is 21 Sagittarius — hit by Saturn at the end of December. Right now she is being hailed in obits as a feminist icon…as this appreciative NYT article explains.   This NYT article has culled seven of the finest episodes of the Mary Tyler Moore Show for your thoughtful entertainment. Mary Tyler Moore was a trailblazer. Her alter ego — Mary Richards — would have marched on Washington last Saturday. RIP.

Thank you for reading this forecast. Here’s the 411 on personal consultations. We will have an excellent discussion together.