The Moon is promenading through regal Leo, where it has been since 2:22 AM ET. A Leo Moon needs constant love love love — as anyone who has ever been involved with someone with a Leo Moon knows. From now until the end of the day on THURSDAY, find ways to help others shine, even if it’s a simple compliment.  Note the potential for pageantry and royal edicts. Indulge in a creative project — something fun and festive.

There are no exact aspects to the Moon today, but tomorrow morning starts off on an expansive and assertive streak, for better or for worse. Note the headlines in the hours just before and after 4:34 AM ET and 6:34 AM ET, when the Leo Moon will clash with aggressive Mars and bigly Jupiter, respectively. Thursday afternoon has an easier flow, faciliting innovation in thought and communication. Chill after 6:10 PM ET, when the Moon goes void…not to enter Virgo until 3:12 AM ET on FRIDAY.

Two patterns that may make things feel larger than life this week are 1) the aftermath of Monday’s Big Ginormous Supermoon in Cancer; and 2) the meet-up of Mars (action) in big big Jupiter on SATURDAY 7:39 PM ET. Next week has still more potency, suggested by banner patterns on the 8th, all suggesting a rare spirit of cooperation and communication. The next day brings the Sun’s annual meet-up with “power and resources” Pluto, joined this year by Venus (money, women, art, social expression).  Take note of initiatives launched over the next several days, including the bigly “Bomb Cyclone,” heading for the East Coast as I type.

Uranus turned direct yesterday. We could expect headlines involving jolts, shocks, aviation and astrology. Exhibit A:  P45’s stunning Tweet in which he takes credit for yet another year of zero deaths on commercial airlines.  Exhibit B: immigration computers at U.S. airports crashed.  Exhibit C: for the third time in recent weeks, the NYT publishes a story about astrology: “How Astrology Took Over the Internet” .  Congratulations, NYT for once again being in synch with planetary patterns, even if your reporter comes across as a bit of a skeptic.

UPDATE:  Orrin Hatch (R-UT), whose horoscope hit a high point for honor and status in August, as discussed here.  It seems it’s been all downhill from there. A potential streamlining and/or gravitas occurred in December, courtesy of transiting Saturn on his Sun and Moon — on the prominent Aries Point. Of course he’s going to be making headlines now.  Next up: the third hit of his Uranus return and transiting Uranus square his 26 Cancer Ascendant, suggesting potential liberation — and likely a change of status, as suggested in that not-so flattering editorial in his local newspaper (and reported here last week).  Mr. Hatch announced he will not seek re-election to the Senate this year. But don’t worry, with transiting Pluto squaring his Jupiter all year, he’ll still have access to plenty of power and resources.

UPDATE: Mitt Romney, whose horoscope has been a frequent topic over the years. Is 2018 the year for him to run for Hatch’s seat? Well, gosh golly gee, his horoscope looks like he’s due for a windfall opportunity, significant recognition and an intense manifestation of his Moon in Scorpio need for power and control; depth and substance.  And the measurements suggesting that potential are above and beyond transiting Jupiter meeting up with his natal Moon and Jupiter on October 28th. It’s interesting to note that the last time he tossed his hat into the ring, visionary/foggy Neptune was in a challenging pattern to his Gemini Ascendant, and it made itself known in the news. If he goes for it this year, Neptune will be on Mercury, his Ascendant ruler. This suggests a need for vision in communication and thoughts, for better or for worse. Hmmm.

Neptune is hot this week, in harmony with the Sun and Venus. Paint it rosy, peaceful and artsy. That would be the upside, as in “77-Year-Old Ballerina Inspires Others to Pursue Their Dreams” — it’s a BBC video. Love it! Add in the shock of Uranus turning direct, and keep your fingers crossed at this peaceful initiative: “North Korea Calls South Korea Hotline in Diplomatic Breakthrough.”  Here’s another one: “The Pianist of the Resistance Captures a Surprise Award” . Or this: “China’s Saxophone Capital Transfixed by Kenny G.”  Kenny G? Sure, why not?

Also reflecting Neptune, but in a broader sense — and specifically, Neptune in Pisces: pot is now legal in California. As anticipated back in 2012, when Neptune first entered Pisces, drugs are becoming more accepted and also more problematic (opioid crisis; pharma prices through the roof). Here’s a post from 2012 about what went down the last time Neptune was in Pisces, starting in 1847.

UPDATE: Steve Bannon. Boy did he make headlines today. In a new book by Michael Wolff called Fire and Fury: Inside the Trump White House, Bannon reportedly called P45 Jr.’s infamous meeting with the Russians “treasonous.” Clearly there is something provocative going on in Mr. Bannon’s horoscope, right? Of course there is. If it’s not in the horoscope, it’s not in the headlines. Exact today, transiting Mars (action! aggression!) is sitting right on top of his Mercury in  Scorpio. Yeah, that’s potentially provocative. He could also be attacked. Astrology is amazing.

The White House issued a response to Mr. Bannon’s quoted remarks, directly “from the President of the United States,” which began:

When he was fired, he not only lost his job, he lost his mind…

…which, as always,  immediately made me think of a textbook definition of psychological projection:

But Wolff’s book is so provocative, WaPo wonders if we should believe it:

A provocateur and media polemicist, Wolff has a penchant for stirring up an argument and pushing the facts as far as they’ll go, and sometimes further than they can tolerate, according to his critics. He has been accused of not just re-creating scenes in his books and columns, but of creating them wholesale.

Do we see that potential in Wolff’s horoscope (born Aug 27, 1953 — time unknown — somewhere in New Jersey)? 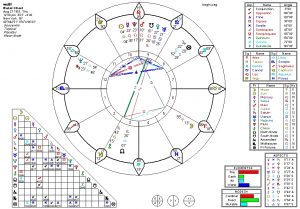 Just look at the dark blue triangle linking planets at the top of this chart (not a fully-calculated horoscope, mind you — just the lay out of the planets on that day). The apex of the dark blue triangle is Mercury and Pluto exactly conjunct — suggesting a persuasive and incisive mindset. They are in Leo — we anticipate drama! The two are in an easy flow with expansive Jupiter in blahblahblah Gemini (on the right), and in another easy flow with Saturn (real) and Neptune (unreal) on the left. Hmm.

If Mercury (how one needs to think) were in a hard pattern with Neptune (vision, deception, fog), it would suggest a mindset that would be more likely to have issues separating fact from fiction (P45 has a hard aspect between Mercury and Neptune — and it is the only aspect to Mercury in the horoscope). For Mr. Wolff, the provocative, blunt, take-no-prisoners conjunction between Mercury and Pluto is softened by its contact with Neptune, suggesting sensitivity, idealism and potentially a bit of poetic license — but what a page-turner.

What does your horoscope suggest about how you need to think and communicate? How is it different from the way your partner needs to think…or your children? Do any of you have the potential to write the Great American Novel? If so, when? These and other compelling concerns can all be addressed in a personal astrological consultation. Here’s how to contact me.