By the time you read this, the Gemini Moon will be new and void of course, suggesting you chill and cogitate on your list of intentions for the new cycle. The Moon won’t get into gear until 3:20 AM ET on THURSDAY, when it enters Cancer. For now, the Gemini Moon drives the day with a need to be the smartest kid in the room. What’s the buzz — tell me what’s happening — and all that. Chill and roll with any twists or flakes that may disrupt your efforts to move forward in a straight line.  Be flexible tonight, as Venus — referring to social expression, values, women, art and money — shifts into Leo at 5:54 PM ET.  This planetary shift  (a.k.a. “wobble”) can take time to sink in.

Tomorrow, you can forge ahead on your quest to establish and preserve emotional security, aided by the Cancer Moon. Perhaps you will wake up inspired by a fabulous idea (Moon conjoins Mercury at 9 AM ET), and push it forward around 2 PM ET, when Moon opposes Saturn. Will an authoritarian push back? Moon-Saturn patterns can rain on one’s parade. What revelations and disruptions will we see as Venus in drama queen Leo is challenged by rebel Uranus at 11:33 PM ET? A break-up or unconventional attraction may well command attention.

Get it off your desk by  12:18 PM ET on FRIDAY, when the Moon is challenged by Pluto and goes void until 3:21 AM ET on Saturday. Thoughts and communication involving nurturing are likely to hit a brick wall, suggested by Mercury (in Cancer) sternly opposed by Saturn in patriarchal Saturn at 9:47 PM ET. I’m prepared for a lean, mean Friday afternoon news dump.

It’s at 22 degrees of Gemini, same as P45’s Gemini Sun – and same as the Full Moon that was exact on December 13, 2016. So whatever was going on that week may be seeded anew in this cycle.  As I recall, the Electoral College was about to meet. to decide the future of Our Nation. How did that work out?

The Sabian Symbol for this New Moon is “three fledglings in a nest high in a tree.” Back in December 2016, I wrote:

…this also is the Sabian Symbol for  P45’s 22 Gemini Sun — his life force — what he brings to the table. Sabian Symbol guru Blain Bovee says of this Symbol: “Little birds sing the tune of their family of species. Having voracious appetites, they sing for their supper with competitive insistence: ‘Me first!’…Fledglings are impatient to leave the nest…they’ve yet to stretch their wings in flight in the open air…a bird’s song expresses identity and a kind of bravado: ‘This is who we are, our clan, our family, and we are safe high in our tree!’” Or high in a penthouse in a tall tower.

You can use these Sabian Symbols to gain a deeper perspective on the potential of every planet and angle in your horoscope. They are fascinating. Bovee suggests we apply the Sabian Symbol of this New Moon with a mind to “…a passage to a new life, a new level of maturity, the moment before a new independent life takes off…conflicting emotions about what lies just ahead but is still out of reach…songs of home and nationality…trembling in the face of being received.” Bovee has a lot more to say, and if you enjoy the Sabian Symbols, why not buy his book.

Anyhoo, this New Moon will activate P45’s Gemini Sun and we can expect him to be singing for his “me first!” supper all month. If you have a planet or angle around 22 degrees of Gemini, Virgo, Pisces or Sagittarius, you’ll be singing, too. Off the top of my head, a list of public figures with those degrees hot in their horoscopes include  P45 (Gemini Sun, Sag Moon), P45 Jr (Mercury in Sagittarius), President Obama (Virgo Mars), Hillary Clinton (Pisces Moon), Mitt Romney (Pisces Sun), the United States (Mars and Neptune), Jeb Bush and George H.W. Bush; James Comey (Sun, Pluto), Mike Pence (Gemini Mercury), Stephen Bannon (Gemini Jupiter). Wait and see.

…well that didn’t take long. Re: P45 Jr., whose Mercury (writing, communication, commerce) is being activated by today’s New Moon) is shopping a book proposal…

When we set the New Moon chart in Washington DC, we see a curious mix of fortune and destruction. The Ascendant and Part of Fortune are at 24 Libra, conjunct Spica — considered to be the most auspicious Fixed Star. The chart is ruled by a high-functioning Venus — at the verrry last degree of nurturing Cancer (and perhaps feeling quite pressured to be as high-functioning as possible in the little time she has left before moving on to drama queen Leo). Because then Venus  — as well as the Midheaven — will be zapped by a disruptive contact from  rebel Uranus, just before opposing aggressive Mars (conjunct a destructive/toxic South Node). This suggests upsets to the public status. 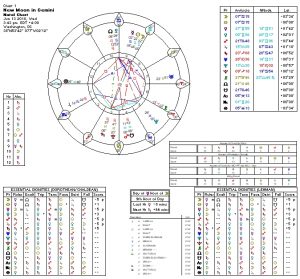 I promised I’d write about Kate Spade and Anthony Bourdain, whose suicides last week were bewildering, to say the least.  General planetary patterns reflecting that potential were similar to those in effect when Whitney Houston drowned in a bathtub on the night of Grammys. Back then, we had Sun, Mercury and Neptune all together in Pisces. Venus was conjunct Pluto and square to Uranus. Last week we had the Sun and Mercury square to Neptune; Venus was opposing Pluto and square Uranus. Disruptive, despairing, catharses in the world of aesthetics, no? We had similar patterns around Philip Seymour Hoffman’s sudden death, too. Coincidence or conspiracy?

We do not have birth times for them, but Kate Spade has Sun at 2 Capricorn and Anthony Bourdain has Sun at 4 Cancer. Thus, both were likely feeling the squeeze on vitality, reflected by transiting Saturn on their respective Suns. This happens for everyone every seven years. That’s not the only suggestion of weight in the horoscopes; there are other measurements suggesting that all through 2017. Let’s move on…

UPDATE:  Dennis Rodman’s curious connection with North Korea was written about here back in 2013. He’s in the news again — courtesy of rebel Uranus shaking up his Saturn, ruler of his Capricorn Ascendant. This summer and into next year, I see potential for continued shake-ups, as transiting Uranus meets up with his Taurus Moon and squares his “getting away with murder” Leo Mars.  With his natal Neptune sitting right on his Midheaven (career, public status), engaged with Moon, Mars and a “big business” meet-up of Jupiter and Saturn, of course he’d be sporting a Potcoin T-shirt. Marijuana and virtual currency  — works for his horoscope, if you ask me.

UPDATE: I wrote about North Korea’s horoscope last August.     Right now transiting Uranus is exactly squaring  its Venus at 0 Leo; within months it will square its 3  Scorpio Mars. The transit to Venus from Uranus suggests a need for an unconventional or sudden attraction. Isn’t that interesting? The upcoming transit to Mars from Uranus suggests rash/reckless/innovative action. Hmmm.

UPDATE: Sarah Huckabee Sanders. Seems like it was only a few week ago that we noted her Venus at 29 Cancer would be hit by transiting Uranus this year, suggesting a need for change and/or intensity of individual expression in matters of values and aesthetics. Today, with Venus right on her natal Venus, she announced a planned exit from her current gig as White House Press Secretary. UPDATE on the UPDATE: Ms. Sanders says she did no such thing. Still, a lot can happen between now and the end of the year…

UPDATE:  the horoscope of California. back in January, I wrote:

A surge of energy is all over California — for better and for worse. After devastating fires last fall, now mudslides. Back in October it was observed that California’s horoscope has Uranus and Pluto conjunct in Aries — at the last degree of the sign.  That potent pair was activated by transiting Jupiter and Mars. This year transiting Uranus will trigger California’s natal Uranus and Pluto multiple times. We can expect more headlines of independence, rebellion, innovation and disruption, such as “California in Revolt” — well into 2019. Because then transiting Uranus will move on to other points in California’s horoscope.

True to the horoscope’s potential, yesterday an initiative to split California into three separate states made it on to the ballot for this November. Seriously.

UPDATE: Adolf Hitler, written about a couple of times here, starting in 2016.   His horoscope was heating up, suggesting strong potential for his way of thinking to experience an electrifying fresh start. That intensity has not abated, as transiting Uranus has moved on from a meet-up with his Aries Mercury and an opposition to his 26 Libra  Ascendant. Now Uranus is sitting on  his 0 degree Taurus Sun, activating it all year before moving on to his 4 degree Leo Midheaven. The horoscope lives forever, doncha’ know…and right now the essence of Adolf Hitler is likely to be disruptive force, even though Hitler isn’t consciously around to exercise free will. It’s depressing beyond belief to see in last week’s headlines that immigrants seeking asylum in the U.S. are being told by border patrol agents that they’re taking children away to be bathed….but they’re not being returned. Reporters are noting that this deceptive tactic was used in Nazi Germany.  In other news, Iowa Congressman Steve King  (R) made news today by retweeting a post by a neo-Nazi….to the sound of crickets from members of his party. Coincidence or conspiracy?

Right. I also promised uplifting stories reflecting the upside potential of planetary patterns.  Exhibit A reflects the redemptive, healing potential of  last week’s wiggy Neptune contacts with the Gemini Sun: “In the Army and the Klan, he hated Muslims. Now, one was coming to dinner.”   Yes, miracles do happen.

Exhibit B  is a message sent from Avid Reader Jackie, with a hopeful perspective:

Sorry to hear that Saturn is hitting up your Mercury and I thought I’d just send a bit of Neptunian encouragement for these hard times. I am, among other things, a mystic, and when P45 was elected I was shocked and appalled and could not understand how something like this could have happened. I asked the Universe for clarification about what was going on and was informed that everything was “operating as intended” and that the country was being presented with its shadow so that we can face it and heal it. Our history of mucking up our environment, inequality and harassment of minority races and women, mistreatment of the poor, over-incarceration, aggression and weaponization, snake oil, secrets and lies has been rising up to be faced. It hurts. But it is an opportunity to wrestle with it and become a better nation. I am encouraged by the ACLU, the #MeToo movement and the Bloomberg environmental movement, and the young people rising up against out-of-control guns, active investigations and investigative reporting, and all the efforts of people both inside and outside the US to tackle the hard stuff. I have hope!

Thank you, Avid Reader Jackie. I have hope, too. So mote it be! Although…we better get on this fast, given yet another shocking headline broke today, “Antarctic ice loss has tripled in a decade. If that continues, we’re in serious trouble…”

Exhibit C needs no explanatory planetary patterns. It’s just my way of ending on a high note, like the fledglings stuck in a nest in a tree: “Raccoon Climbs Minnesota Skyscraper and Becomes Internet Sensation.”

The story has a happy ending.