I hope you enjoyed a lovely long weekend. Here’s how this short work week goes:

Mercury goes retrograde at 8 degrees 55 minutes of Libra. Here is what you need to know:

Mercury will travel backward in Libra until September  23rd, when it will re-enter Virgo. Mercury turns direct at 24 degrees of Virgo on October 2nd. Mercury won’t cover new ground until October 17th, when it returns to 8 Libra. Mercury retrograde in Libra suggests a ton of “on the one hand…but on the other hand” discussions in a quest for balance. The operative word is is QUEST, as Mercury in Libra swings from side-to-side…BIG TIME. I say “big” because during this Mercury retrograde period (including Mercury’s shadow period), Mercury opposes Jupiter (expansion) three times. The first opposition was on September 2nd; the next two are on September 18th and October 12th. What comes out on that last one may be a boondoggle, as it will coincide with the first square between Mars in Gemini (a war of/on words) and Neptune (idealism; lies; scandal). Mercury is also in a series of trines with Pluto, suggesting that ideas and information being weighed during this period have depth, possibly in the extreme. Mercury-Pluto contacts generally bode well for investigative reporters. The Mercury-Pluto trines were/are on August 22nd, September 27th, and  October 6th.

The Sabian Symbol for this Mercury retrograde is “three old masters hanging in an art gallery,” which Sabian Sage Guru Blain Bovee interprets as a level of excellence that may not be appreciated in its own time. Perhaps this doesn’t matter, hmm? Be excellent anyway. Whaddaya think? With respect to our mindset during this Mercury retrograde, we are advised to reflect on “finding a home where one’s creative visions can be hung; admiring a past in order to project a future.” Somehow we’re likely to see these themes in the news.

Here is the chart for Saturday’s Full Moon in Pisces, set in Washington, DC. 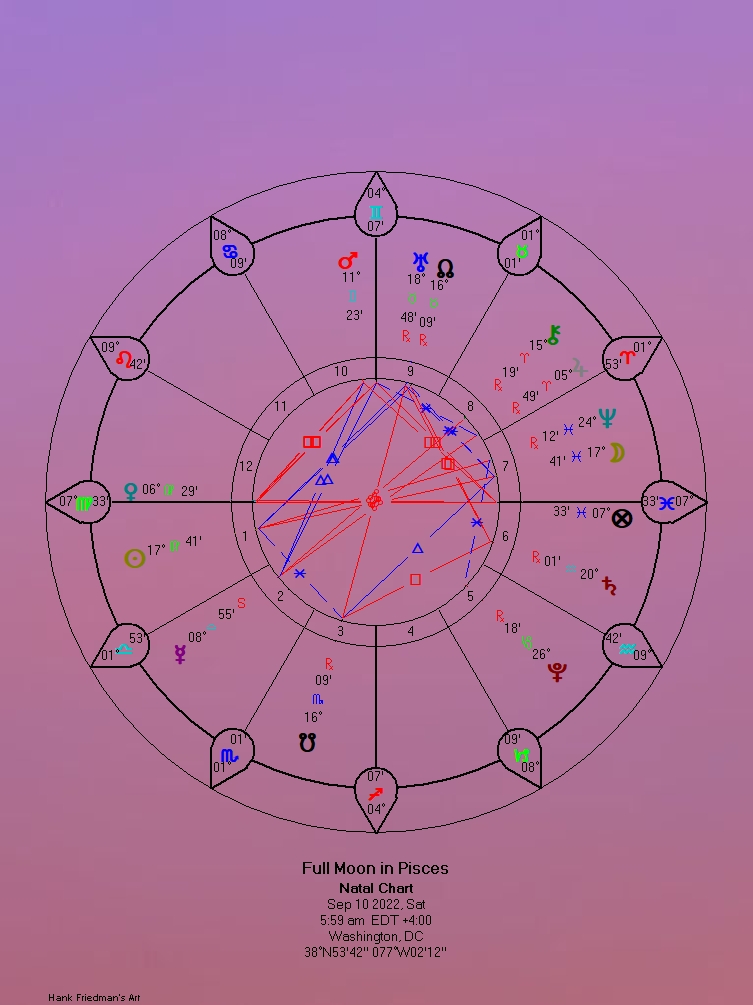 And now the news — briefly.

Artemis did not launch last week. As you know from last week’s Forecast,  the chart for the planned launch on Monday had Neptune in contact with the angles of the chart — a potential dissolving of boundaries, reflected by a mysterious engine leak. NASA thought about launching on Friday, with Moon in Scorpio on a Scorpio Ascendant, which did not look promising, in my humble opinion. The third effort was on Saturday, starting at 2:17 PM ET — with Moon in Sagittarius (better for a lift-off) on the Sagittarius Ascendant.  However, Neptune was at the root of the chart — and as it turned out, the leak was still causing problems! I’d be stunned if NASA is using astrology to pick these dates/times, but it’s interesting that all three of these launch possibilities had the Moon rising in the East. Anyhoo, the launch has been postponed until later this month or next.

In the chart for Friday launch, it is interesting to see that Mercury and Mars are in an approaching trine…BUT…because Mercury is about to turn retrograde, this trine isn’t going to happen.  Remember when I wrote last week (commenting on the patterns among Mercury, Mars and Jupiter suggesting BIG ACTION and BIG THINKING) and added:

“So we have a rush of energy to process, & some of it may go nowhere, fast.”

In other words, no Artemis launch…and oh, by the way, that TFG-appointed, loose Cannon of a judge whose confirmation was rammed through the Senate AFTER the former guy lost the election, is throwing wrenches in the DOJ’s efforts to hold TFG accountable for his theft of top secret documents belonging to the U.S. government.  Former U.S. Attorney General/TFG enabler Bill Barr declared Judge Cannon’s recent rulings “wrong” and “deeply flawed.” We don’t have a birth time for Barr, but I was wondering what sort of heavy, disruptive thought patterns he’d be dealing with as transiting Saturn and Uranus connect with his persuasive Mercury-Pluto square. Now we know.

We don’t have a birth time for Truss, but she is a Leo driven by Moon in Pisces, with the Moon potentially square to Neptune. Translation: a keenly sensitive soul, for better or for worse. It’s interesting that her natal Mars (how she needs to execute an action plan) has been under the intensely innovative/disruptive influence of transiting Uranus, and she’ll have two more transiting of Uranus on her Mars over the next several months. Her action plan is likely to be innovative, daring and possibly reckless. Both her Sun and Mars will be affected by the next two eclipses, and I’ll write more about that potential as eclipse season approaches. Meanwhile, transiting Pluto has been opposing her natal Mercury (how she needs to think), suggesting that her communication and mindset are in a period of persuasive power. There’s more, but that’s it for now.

Aerial view on Statue Of Mercury in Lviv, Ukraine

Astro-logical Forecast for Thursday-Sunday 12/17-20/2015: Astrology in the News and Other Big Things

Monday 5/9/2022: Sneak Peek at the Week; Mercury is RETROGRADE; Jupiter in Aries
0 replies