After Labor Day Monday’s long Moon void, the Moon left airy-fairy Libra at 7:35 PM ET and plunged into the emotional depths of Scorpio, where it is today. A Scorpio Moon needs knowledge for the sake of power and control, and with a high-functioning Mercury (how we need to think) activated all week by contacts with other planets, that Scorpio need for substance is not likely to be disappointed.  This may be a week for forming powerful alliances and channeling ginormous ideals that may be divine…or delusional. We may be privy to an excess of nitty-gritty detail. It’s hard to find words to describe the potential — perhaps because there are no planets in Air Signs this week. No Air Signs in a horoscope can suggest an aversion to frivolus chitchat, and the use of words carefully employed for the sake of utility and strategy. When I look at the patterns of planets on paper for the week, I see wave after wave after wave. Apply these patterns to your quest for personal world domination, even if the bigger world around you seems to be falling apart.

Moon’s weekly clash with rebel Uranus at 6:17 AM ET starts TUESDAY off with a shock or other disruption to the status quo. Laser-beam precision in thought and action is suggested in the morning, as high-functioning Mercury in Virgo meets up with action hero Mars at 11:40 AM ET. If you’ve got a planet or angle around 10 degrees of Virgo, Gemini, Sagittarius or Pisces, you’re feeling the urge to make a pitch or a move more than most. Use that action-oriented Mars drive for a worthy crusade. From then until early evening, the Scorpio Moon chats up four planets in the solar system: Mars, Mercury, Sun and Saturn. Action, words, willpower and authority/structure — in that order — and perhaps much of it accomplished under the radar, as Scorpio can often do. The day ends with a perfecting ideal, as Mercury meets up with the Virgo Sun at 9:40 PM ET.

Whew! What a week — and Congress is back in session. Gonna be busy.

A few words about last week’s New Moon. The seeds that were planted in that chart may develop in synch with the rush of planetary action described above. This is the chart for the New Moon set in Washington, DC — and you’ll notice a cluster of planets right on the Virgo Ascendant — especially Sun and Mars. This is a lunar cycle of action and/or aggression involving leaders and/or willpower — right in the face of the United States. 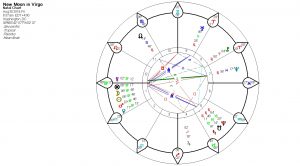 Meanwhile, the Sabian Symbol for the New Moon is “a harem,” which is — as Blaine Bovee points out — an Arabic term meaning “anything forbidden.” We think of a harem as “forbidden quarters” set up for women, who may be protected from the public — but also confined to a life of “service” that may otherwise be seen as imprisonment. Hmm. Benjamin Franklin’s quote about someone who is willing to sacrifice freedom for security deserving neither springs to mind, even if it appears that we are currently out of touch with the original intent of Franklin’s statement.  Regardless, experience has shown that the Sabian Symbol for a New Moon is curiously reflected in news throughout the lunar cycle.

I am fascinated by Hurricane Dorian’s progress — and how it reflects planetary patterns. It was originally expected to reach landfall in Florida on Monday morning. This was the planetary forecast:

Dorian had slowed to a stall over the Bahamas — and lingered there all day — inflicting wretchedly excessive aggression — and all night!  Not until 8 AM this morning did it finally move and shift — only after the Scorpio Moon clashed with disruptive Uranus at 6:17 AM ET! And, true to what we would expect during a long Moon void, Dorian has lost steam, with wind speeds now half of what they were as a former Cat 5, which left the Freeport airport — and much of the islands — completely under water, as you can see from this tweeted image.   Meanwhile, in the United States it appears that Dorian may hug the coasts in Florida, Georgia, the Carolinas and Virginia — instead of crossing land. We’ll see. Looking at the Moon and other patterns,  I would imagine Dorian losing steam or stalling again during the all-day void on Wednesday, with a potential rough patch on Thursday evening as the Sag Moon pushes boundaries and squares the Sun and Mars.

Silver lining: reflecting the upside excess of yesterday’s Venus-Jupiter square: “Chef Jose Andres is in the Bahamas, Ready to Help After Dorian.”

One reflection of the aggressive and wretchedly excessive potential of Monday’s patterns was yet another focus on the horror of America’s cultural romance with guns. In Odessa, Texas seven people were killed and many more were wounded when a man who happened to have an assault rifle in his car was pulled over by police on a traffic stop. Greg Abbott is the current governor of Texas, who famously tweeted on October 28, 2015 that he was “EMBARRASSED  that Texas was the #2 state in the nation in new gun purchases, behind California. Let’s pick up the pace Texans”  Well that’s a bit dramatic, aggressive and arguably idealistic/delusional, isn’t it? What do you think we’d find in a horoscope cast for his birth date: November 13, 1957 in Wichita Fall, TX? Ohhh…just a Scorpio Sun driven by a regal drama king Moon in Leo, possibly squaring an exact meet-up between a possibly fanatical Mars in Scorpio and Neptune. Astrology is amazing. The U.S., as you will recall, has a square between Mars (guns) and Neptune (romance/delusion). It’s part of our national culture, as Marianne Williamson argues in this op-ed.

Elsewhere in the world, citizens of Hong Kong continue to protest China’s expanded efforts of authoritarian control. It’s as if the people of Hong Kong realize something precious is at stake, and they are willing to step out of their comfort zone and fight for it. Unlike their governmental adversary, the protestors do not have a central leadership, which makes it more challenging for the government to control. It’s a sneak peek of how things may shift once Saturn and Pluto complete their stay in corporate Capricorn and take their mojo into Aquarius, sign of “We the People.” Fun Fact: as hard-nosed and cray-cray as certain patterns in the U.S. horoscope can be, it is driven by the Moon in humanitarian Aquarius.

In the UK, Prime Minister Boris Johnson declared he would suspend Parliament, barreling ahead on his desire to take the UK out of the EU on October 31, deal or no-deal. Thousands of citizens took to the streets in protest, as if they realized something precious was at stake and were willing to step out of their comfort zone and fight for it. It has since been revealed that Johnson’s plan to suspend Parliament was cooked up two weeks before he made his formal request to the Queen. Members of Parliament who wish to thwart Johnson’s aims have only this week to pull it all together before Parliament is suspended — think about their objectives in light of the waves of planetary patterns happening this week. It’s going to be quite a ride — and Johnson’s machine is off to a bumpy start, as he has just lost his Parliamentary majority. You can find musings and a link to the UK’s horoscope in this forecast posted in March 2019.

In the United States a protest march is on the calendar. “We the People” is happening Saturday, September 21st — in a city near you.

In other news, I’m excited to revisit my forecast for last week, when Uranus was pulling so much focus. Here’s what I wrote on Thursday:

I recall carefully considering my inclusion of “astrology” in the mix — but sensed that it was absolutely spot-on. Guess what happened?? NYT has since published not one, but TWO articles about astrology!! On Thursday, August 29th: “Now Therapists Have to Figure Out Astrology, Tarot and Psychedelics”  (like this is a bad thing?) — with the comments section disabled (what are they afraid of?).  On Sunday, September 1st, as Mercury — now in Virgo — trined Uranus: “Like A Virgo: How the Times Covers Astrology.”.  Comments are enabled for this articles, and as of Monday 9/2, there was only one — slamming astrology.  So if you’d like to add your two cents and tell NYT that its headlines continue to provide proof of astrology’s validity, whether it’s scientific or not, I won’t complain.

And yes, the NYT apparently is a Virgo, first published on September 18, 1851. Driven by an info junkie Gemini Moon, we can now appreciate the aptness of its advertising slogan: “All the news (GEMINI MOON) that’s fit to print (discerning VIRGO SUN — and perhaps a Virgo Ascendant, too — ruled by  Mercury retrograde prominently placed in people-pleasing Libra at the Aries Point). While the Times may sniff dismissively at astrology’s merit (because it does not see astrology as “scientific”), this in no way proves that astrology is not accurate. And if an NYT editor happens to stumble across this paragraph, let me just say that when I decided to see if knowledge of planetary patterns could be used to anticipate daily headlines — and specifically the NYT as “the paper of record,” I did not know if it would work. Ten years later, I continue to be astonished that it does. Here’s to another ten years, with apologies in advance for typos, dear Virgo NYT. Perhaps you can connect me with an excellent editor.

I have a truckload of other stories I could share, but time does not permit.

Thank you for reading this forecast. Yes, I would be delighted to talk to you about your own unique horoscope. 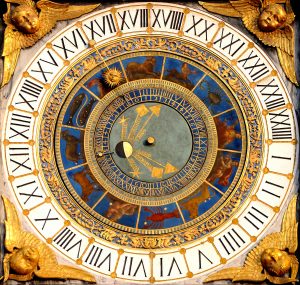