The Cancer Moon is not yet new (as I write), and I don’t know about you, but the restlessness and listlessness of the dead Moon seems stronger than usual. Perhaps because this New Moon — exact at 3:16 PM ET — will also be a total solar eclipse, the first one since the Great American Eclipse in August 2017.

A New Moon offers an opportunity to set our intentions for the next 28ish days. The eclipse adds potency to seeds that may be planted, and here’s the theory. Solar eclipses act like a “bottleneck” of energy. Light flowing from the Sun is temporarily interrupted, focusing attention on that interrupted point. As light is held back, something new and possibly fragile may enter the picture and grow. And here I would be thinking of Michael, the kindhearted policeman in the storybook Make Way for Ducklings, who stopped the flow of traffic on Beacon Street so Mr. and Mrs. Mallard and their brood of eight could safely make their way to the Boston Public Garden. Otherwise, they would have been roadkill. Got that?

With the Moon in Cancer, the seeds planted involve matters of  emotional and home/homeland security. Y’know, core foundational concerns. Are you standing on solid ground? Where is your home? Tell me about your family, your mother, your ancestors. How are you being nourished and nurtured? How are you nurturing others?

To see what this eclipse suggests for the U.S. this cycle, let’s look at the chart in Washington D.C. 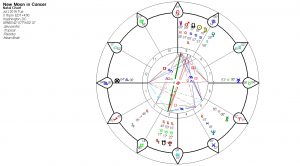 We see the Sun and Moon in the area of the horoscope related to foreign affairs, publishing, collective belief systems (law, religious dogma, philosophy) and higher education.  The two are about to meet up with the North Node in Cancer. The North Node symbolizes an opportunity for growth. In Cancer, the path to higher development involves caring, mothering and nurturing. What gets in the way of growth is represented by the South Node in Capricorn (patriarchy, status, governmental structures  — without feeling). With Saturn retrograde in Capricorn and about to oppose the Sun-Moon in Cancer, there’s strong potential for growth to be blocked by corporate Powers That Be.

Rebel Uranus is on the 7th House cusp — a.k.a. the Descendant — a.k.a. one of the angles of the horoscope. This is in-your-face disruption/revolution/innovation/surprise.  Mercury (how we need to think) and Mars (how we need to act) are aligned in royally entitled drama king Leo (so prepare for thoughts and actions accordingly). Mercury and Mars are also about to square Uranus, adding a possible mad scientist, true genius, reckless warrior, genetic mutation and/or shock factor to royal expression and action. Meanwhile, Venus — women, money, values and social graces — is isolated at the end of double-talking info junkie Gemini,  attracting attention but not connecting with any of the other kids in the sandbox. Somewhere, somehow during this lunar cycle, we may witness a woman saying, “I told you so.”

The Sabian Symbol for this New Moon — offering clues to what we will be hearing in the news this month — is “a clown making grimaces.” To quote George Takei, “Ohhhhhhhhhh my.”  Sabian Symbol Blaine Bovee describes this symbol as “the image of a buffoon, professional or by nature, making faces of pain, disgust or fright.” Did you know that the word “fool” derives from the Greek word follis, meaning windbag or bellows? “The art of a clown,” says Bovee, “is to show an exaggerated expression of an obvious nature through a painted face.  We should apply this symbol with a mind for “a need to cleverly camouflage oneself and the question, ‘Who is the fool?'”

The area of your horoscope in which this New Moon/eclipse falls is where you is where you may have an opportunity to plant seeds that can create greater emotional security. You are more personally affected by this lunation if you have a planet or angle around 10 degrees of Cancer and Capricorn — and to some extent, Aries and Libra.

And now, a look at patterns for the rest of the week. There aren’t any among the planets, except from the Moon. I’ve noticed that weeks with these seemingly light patterns have coincided with events not unlike that of an ice shelf in Antarctica falling into the ocean for no apparent reason or warning. If an actual ice shelf makes news this week, I won’t be surprised. That being said, the rest of the week goes like this:

The days before a New Moon are apt times for planning and executing strategies you’d prefer to remain unseen. Thus it was an intriguing time for last week’s G-20 summit in Osaka, even in the afterglow of last week’s “can’t be all be friends?” harmony between the CEO Sun and wacky buddy Uranus. Follow that link to Japan’s helpful website and you will learn that the G-20 represents 80% of the world’s GDP. Sure, everybody wants to rule the world, but too bad, there’s only enough room for 20 at this here table. And how that 80% of the world’s GDP is managed and distributed is what th”Who Se ongoing tango among Saturn, Pluto, the toxic South Node  — all in PTB Capricorn — is  about. January 12, 2020 is when Saturn and Pluto finally meet up.

Here are the lowlights of the conference, helpfully compiled by Mother Jones.

Speaking of secrets, as U.S. Secretary of Agriculture moves ahead on efforts to neuter scientific research by moving the Department’s headquarters from D.C. to Missouri, Politico published an in-depth report on “the best-kept secret” in the Department.

Elsewhere, the afterglow of the Sun’s harmony with unconventional Uranus was an apt backdrop for the largest celebration of LGBTQ pride in the world — right here in New York City this weekend. Mother Nature herself got into the spirit — and sent a rainbow messenger to kick off festivities. Coincidence or conspiracy?

Meanwhile, Neptune in Pisces offered us another chance to master the lesson of empathy, along with a few cautionary tales…

Gahhhh — most of these stories are so heavy —  (you might be thinking). Welcome to the world of headline news in interesting times. Still, there are always a ton of stories on goodnewsnetwork.org — enjoy! And Beth Owls Daughter’s Tarot Card of the Week offers a potentially heroic application of the regal Leo spin on words and actions we can try over the next several days. Leo rules the heart, doncha’ know.

Plus, right now the U.S. women’s soccer team is ahead in the semi-finals — happening live as I go to press. Megan Rapinoe isn’t in the game — sidelined — perhaps — by a frustrating hit of restrictive Saturn on her Mars (action). Her birthday is on the 5th — she’s a Cancer with Moon in Aquarius, just like the U.S. We don’t have a birth time — but you tell me if you think she’ll have reason to celebrate on Friday. Here is her horoscope.

No sleeping in on Monday. Mercury and Mars will meet up in Leo and Venus harmonizes (by sextile) with Uranus. Human kindness (it’s overflowing) and a courageous stand would be the upside potential of those patterns.  Cue Bette Midler with that song from Beaches now, please. It’s been in my head all day — for the children in cages, the citizens of Chennai, India and everyone else who needs a lift. 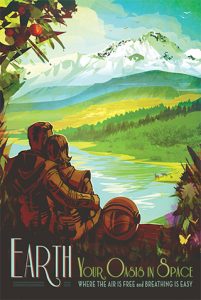