I started writing this post yesterday (Monday) — had to put it aside before it was finished. Here’s how it went:

The work week begins with an energy surge that’s been building for the past few days — can you feel it? Jupiter, the expansive cosmic sugar daddy, met up with Sagittarius Sun at 1:34 AM ET. In Sagittarius, Jupiter facilitates the expansion of boundaries and speech. The Sun refers to the will and the heart, so grandiosity and generosity are also facilitated.

At 3:06 AM ET, retrograde Mercury squares Mars, perhaps sloppily so. You’ll feel the tension between the planets of thought and action more personally if you have a planet or angle around 6 degrees of Gemini, Sagittarius, Pisces or Virgo. That’s your excuse for interactions with other that are more provocative than usual, for better or for worse.

At 10:07 AM ET, Moon makes its weekly clash with Pluto, suggesting a power play or a catharsis. The Moon is in Cancer today, seeking to fulfill its mission of establishing and preserving family/homeland security.  Cooking at home or other home-based aesthetic tasks would be apt tonight.

Seize the day today! You can make good use of other patterns that are exact tomorrow — TUESDAY, as follows:

On WEDNESDAY, the Moon continues to roar through Leo, with no exact aspects. Keep on truckin’.

THURSDAY is busy. The Moon in Virgo takes over at 6:08 AM ET, after a 75 minute Moon void (you’ll barely notice). A Virgo Moon seeks to organize, analyze and make things right — cleaning up the confetti after the Leo Moon’s fiesta. And while it’s cleaning, this Virgo Moon will bounce off of seven — count ’em — seven planets: Venus, Uranus, Mercury, Jupiter, Saturn, Sun and Mars — before calling it a day. See if you notice a faster pace, compared to Wednesday.

FRIDAY is also driven by the Virgo Moon. Note your dreams upon waking, as the Moon faces off against dreamy Neptune. Your organizational efforts may feel especially empowering in the afternoon, as Moon harmonizes with Pluto. Doesn’t give you joy? Throw it out!! Meanwhile, November goes out with disruptive glamour, as Venus in Libra opposes Uranus in Aries, exact at 9:12 PM ET. This pattern has been in effect all month, frankly — and Avid Readers know that supercharged Venus-Uranus patterns favor “unconventional” attractions involving women, money, art and social expression. They also suggest disruption in the markets, aviation and technology.

SATURDAY is driven by the Moon in people-pleasing Libra as of 9:49 AM ET. Big news of this day is Mercury — retrograding itself back into the cryptic and controlling waters of Scorpio. Well, at least thinking and communication will be not-so-sloppy-Sag.

SUNDAY is also Moon-in-Libra driven, and at 12:02 PM ET, Venus follows Mercury into Scorpio. Gone is the people-pleasing diplomacy of Libra; Venus in Scorpio demands depth and substance, ruthlessly. We may see that ruthlessness in the headlines in the evening, as the boundary-pushing Sag Sun squares action hero Mars at 7:35 PM ET, followed by the Moon’s square to Pluto at 8:29 PM ET. You’ll feel the call to action/assertion more personally if you have a planet or angle around 10 degrees of Gemini, Virgo, Sagittarius or Pisces.  Mark it in your calendar, especially if this Mars hit involves your Ascendant, Midheaven or Moon. If you haven’t the foggiest idea what I’m talking about, it’s time to get to know your horoscope in a personal consultation. Astrology is an empowering tool and I would love to teach you how to use it.

Really, could there be a more perfect day to land a spacecraft on Mars? Did you watch it live? Here’s the tape.….and here is the horoscope for the successful touchdown: 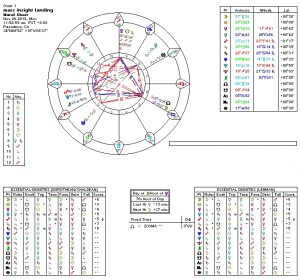 How cool is it to see Mercury, Sun and Jupiter pushing boundaries to the extreme in the 9th house of foreign travel? These three are also sitting right on the Midheaven, one of the angles of the horoscope. This gives them even more clout — and oh, look! They are squaring MARS in the 1st house, which is what this boundary-pushing journey is all about! What other patterns do you see in this horoscope that aptly reflect this moment in time and space? Astrology is amazing.

Neptune turned direct over the weekend, and as you can see from the chart above, it’s getting close to making contact with four other planets: Mercury, Mars, Sun and Jupiter. Now and over the next several weeks, look for an uptick in Neptune themes: refugees, toxins, spirits of all kinds, victims, oil, vision, drugs, healing, fantasy, delusion and deception.

UPDATE: Paul Manafort, last discussed here on June 15th, in the aftermath of the second of three limiting/controlling series of hits from transiting Saturn. Now he’s dealing with the third series of controls, as Saturn squeezes his natal Venus, Mars, Sun and Neptune through January. From the NYT: Manafort Breached Plea Deal by Repeatedly Lying, Mueller Says, calling for Manafort to be sentenced immediately. But wait, there’s more Neptune scandal to be revealed! “Manafort Held Secret Talks with Assange in Ecuadorian Embassy,” says The Guardian.

Meanwhile, GM announced massive layoffs and the closing five North American factories. What else would we expect with Uranus the Disruptor in the tail end of Aries, ruler of cars? GM is transitioning to self-driving, electric cars of the future, says CNN. Self-driving cars, fueled by electricity. Yep, that sounds like Uranus (electricity) in Aries (cars, self).

I could keep on writing, but if I don’t hit “post” now, I won’t get this shipped until after my appointments today. So…here ya go…and enjoy…and thanks to all who have thought of gifting friends, colleagues and family with astrological consultations. Have you thought about booking a consultation for yourself, too? It’s time to make a plan for 2019!

Thank you for reading this forecast. Stay tuned!!

Astro-logical Forecast for Monday 8/3/2015: Sneak Peek at the Week; Expansion vs. Contraction; Saturn is a Bitch
0 replies