The New Moon in Aquarius begins at 4:05 PM ET, offering us an opportunity to re-set  intentions and goals for the next lunar cycle.

Aquarius is a airy (mental), fixed (organizing) energy. Where Leo, its opposing sign, is concerned with personal creative expression and recognition, Aquarius needs to focus on the expression needs of a particular group or group consciousness. Keywords for Aquarius include innovation, eccentricity, friendship, humanitarian, unconventional, rocket scientist and/or mad genius. If you were born with the Sun in Aquarius, you have the energy to innovate and intellectualize with others. If your Moon is in Aquarius, you need to be socially significant — and dare I say appreciated for it.

The chart for this New Moon set in Washington DC has Uranus right on the Midheaven and in a cooperative connection with the Aquarius Sun, Moon and Mercury. Here in the U.S., we see the suggestion of a visible disruption to the status quo. Those cooperative connections suggest innovation in thought and communication — perhaps in the way the message is dispersed to the masses. There’s another cooperative connection between Venus (women, money, art, social expression) and Saturn (structure, cuts, control, discipline), exact at 6:19 PM ET. 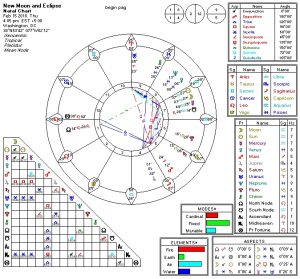 These harmonies may seem at odds with the potentially scandalous and bewildering square between Mars and Neptune, exact on SATURDAY at 6:21 AM ET.  Mars (action, war, anger) and Neptune (vision; fog) suggest spiritual warriors; fanatical or sublime vision; bewildering violence and prurience — just to name a few.  However, one apt manifestation of the sum of these patterns would be yesterday’s tweet from Bess Kalb (Venus)  a writer (Mercury) for  Jimmy Kimmel (comedy; ergo, Uranus). In the wake of the latest bewildering (Neptune) and horrible school (Mercury square Jupiter) shooting (Mars),  Ms. Kalb responded to the usual “thoughts and prayers” gobbledygook (Neptune) from Certain Politicians with an itemized list of exactly how much money each had received (Venus sextile Saturn — get real about cash, dudes) from the NRA (Mars). Scandalous, no?  And this all happened on social media (Mercury sextile Uranus). Coincidence or conspiracy?

If you have a planet around 13 degrees of Pisces, Virgo, Gemini or Sagittarius, your horoscope is affected by this weekend’s Mars-Neptune square.  You may find yourself a wee bit provoked or irritable, without fully understanding why.  This too shall pass. Don’t know where your planets are? Then why not order an Astro-Basics Report, so you can make this forecast even more meaningful.

But wait — there’s more. The New Moon is also a solar eclipse. This is an interruption of the normal flow of light and whatever else beams to Earth from the Sun. Picture a river meeting a dam. A bottleneck of energy is created,  that must eventually find a release, usually over the course of a few months.  Upside: the interruption of flow creates space for something new to be born. Downside: the rush of energy eventually expressed wipes something out. Wherever the eclipse falls in your horoscope,  that’s the area of life where something needs to get started or be brought to a close. If the eclipse falls on a planet or angle of your horoscope, you’ll feel it more.

Secrets are often revealed around an eclipse. Consider that when following the news.

Today’s eclipse is not a total solar eclipse, like the Great American Eclipse we had last August. It won’t be visible in the U.S. or much of anywhere else.  Still, it activates the August eclipse, and the horoscopes of anyone who has a planet or angle around 27 degrees of Aquarius, Leo, Scorpio or Taurus.  Therein lies its potency.

The Sabian Symbol for this eclipse is “a tree felled and sawed.” Sabian Symbol Blain Bovee wants us to know that “to be ‘felled’ is to be struck down…an archaic sense of ‘fell’ means cruel, deadly, as in a ‘fell potion,’ and from which the term ‘felon’ is derived.” I didn’t know that…did you? We are advised to be in a planning mode — stockpiling or renewing resources for future leaner times. Here’s more from Bovee on this challenging Sabian Symbol. Will someone please alert Scott Pruitt and Ryan Zinke,  whose championship (Mars)  of oil, chemicals and gas (Neptune) was one of the hot talking points in this week of Mars square Neptune?

What’s going on in your horoscope? How is it being affected by these eclipses? What opportunities are likely to come up for you this year? Wouldn’t it be wise to plan ahead?  Here is the 411 on reports and consultations.

On Monday I promised you gender-benders, big ideas, technology and fantasy. I should have added “leaders,” with quirky Uranus in a harmony with the Sun (leadership). This post took over internet this week. What do you think?

Here’s the link to the full post. You can download your own gender-bending app by googling “Face App.” It’s free. Enjoy!

No shortage of Mars-Neptune scandals to report, starting at the top:

Mars rules the head. Neptune refers to blood, Thus, “Concussions Can Be Detected with New Blood Test, Approved by the FDA.”

Mars with Neptune suggests a heroic (Mars) fantasy film (Neptune). Is is any wonder that “Black Panther,” a superhero fantasy film, has such big buzz for its opening this weekend? Meanwhile, in Germany, female actors are being encouraged to ditch the glamour and heels and wear something comfortable to a Berlin film festival. Shades of Venus-Saturn in that one. Women and aesthetics get real.

Let’s end with a link to a photograph (Neptune) that boldly pushes boundaries (Mars in Sagittarius): it’s a photo of a single atom — yes, a photograph — of something you may never have thought you could ever see with the naked eye. Wow!

Thank you for reading this forecast.  And thanks to the Avid Readers who tuned in to Cosmic Tuesdays, hosted by Anthony Picco. We had so much fun answering listener-submitted questions. about Krakatoa and such. I’ll be back on the show on Monday, March 19th — at 9:30 PM ET/6:30 PM PT. Will post a link beforehand.