Housekeeping notice: The URL for my website has changed! Please bookmark https://elisabethgrace.com. If you are searching the archives, your search will likely take you to something on graceastrology.com — which from an aesthetic stance looks like the aftermath of the final sale at Barneys. There’s no new content on that site, so please bookmark https://elisabethgrace.com.

The day is driven by a Gemini Moon, which has been void since it exactly opposed the Sagittarius Sun at 12:12 AM ET — on 12/12. The repetition of “12” has been noted all over the internet as Signifying Something — but really, it only applies to the Eastern Time Zone. On the West Coast, the Full Moon happened at 9:12 PM on 12/11. Here’s the chart for the Full Moon, set in Washington DC. We set the event in Washington because it is the capital of the U.S.: 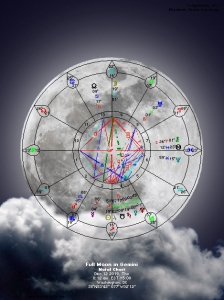 Immediately we see that the Sun-Moon opposition at 19 Sagittarius-Gemini is almost exactly on P45’s 20 Sag South Node, 21 Sag Moon and 22 Gemini Sun. The Full Moon is also in contact with the 22 Gemini Midheaven of the Full Moon chart, and square the 23 Virgo Ascendant. A Gemini Moon needs to chatter intensely in an effort to be appreciated for being the smartest kid in the room. How are you seeing that potential in your own personal world today?

The Moon has been void since 12:12 AM, potentially running away with the whole day, generating crises which turn out to be much ado about nothing. That’s what we have until 6:23 PM ET, when the Moon gets focused on matters of emotional security and comfort and enters Cancer. But as you can see, this Full Moon — which suggests release or illumination in matters of “what I think” vs. “what the collective thinks” — is strongly connected with the horoscope of P45. Thus it is no surprise that he set a new record on his Twitter feed — 108 at last count — which shattered the previous record of 105 tweets set over the weekend. If you have a planet or angle around 19-22 degrees of Gemini, Virgo, Sagittarius or Pisces, how are you experiencing the activation of the Full Moon?

The most delightful tweet of P45’s torrent is an insult to Greta Thunberg, who was just named Time magazine’s Person of the Year. If you subscribe to Mountain Astrologer, you would have read about Greta’s horoscope in the Dec/Jan issue, in which the potential for significant pixie-dusted fame in early December was noted (the article was written in early September). What’s delightful about P45’s jealous tweet is how in sync it is with planetary patterns. Not only is the Moon void,  but Mars (anger, action, courage) is in harmony with Neptune (fantasy, escape, film). Venus (women, social expression, money, art) is conjunct Pluto, suggesting empowerment and/or emotional extremes in Venusian concerns. So it is no surprise that P45’s response to another tweet congratulating Ms. Thunberg was this:

“So ridiculous. Greta must work on her Anger Management problem, then go to a good old fashioned movie with a friend! Chill Greta, Chill!”

That’s excellent — if weirdly-projected advice for this particular all-day Moon void. Roll with any twists and flakes that may disrupt efforts to move forward in a straight line. Focus on routine concerns. Remember that a crisis which crop up is usually much ado about nothing. If you’re feeling overwhelmed, skip out early. Get thee to the cinema and chill, chill, chill. That’s exactly what Ms. Thunberg said she was doing in response to the “crisis” of being personally attacked by the President of the United States, as you can see from the updated bio on her Twitter page.

The Sabian Symbols for today’s Full Moon in Gemini are in sync with overall patterns for the week, especially a rare harmony between cosmic sugar daddy Jupiter and the sudden flash of  genius suggested by Uranus (exact on Sunday). For the Moon at 20 Gemini: “a cafeteria.” So many options to choose from, efficiently presented. It’s hard to decide what to have! For the Sun at 20 Sagittarius: “men cutting through ice.” Sabian Symbol sage Blain Bovee notes that cutting blocks of ice was a way of preparing for the future once upon a time. We didn’t have freezers to keep things cold, so ice had to be cut and stored for use in the summer. Hmm.

Bovee invites us to apply these symbols with a mind for “service genius that skillfully handles matters of hot and cold; creating an atmosphere that encourages future communal gatherings,” perhaps even by “breaking the ice” in an awkward social situation, thus improving the flow. So let’s watch and see how these themes are reflected in the headlines — and in your own personal world, if your unique horoscope is being activated.

And now the news….after I post this recap of the daily forecast for today through Sunday. Skip through it if you just want to get to the news.

UPDATE:  As anticipated, upsets continue in Israel. No governing coalition has been formed, and there will be a third general election — probably in March. Guess what’s happening then? Ready? The third in a series of squares to Israel’s Leo Moon from transiting Uranus. The second one was on November 3rd — check the archives to see how that was reflected in Israel’s experience. Israel is scheduled to do some serious transformation and restructuring of its core foundation in January and February, as Pluto (transformation) and Saturn (structure; cuts) hit the angles of the horoscope. Is

Meanwhile in the UK, the polls are soon to close in today’s election. With the Moon void, we see the potential for upsets favoring the underdog.  There is also the potential that all of this effort may come to naught, not unlike what has happened twice in  Israel. Hmmm. Glancing at  The Guardian‘s live blog for the election, I’m seeing a number of twists and flakes involving the actual voting process. The challenge during a Moon void is to FOCUS, people — FOCUS!

Reflecting the potential for severe cuts (Saturn) involving food (Venus): the P45 administration plans to take away food stamps from 700,000 people. But hey — that same heavy Venus-Saturn conjunction (along with this weeks big trines involving far-out Mars-Neptune and Jupiter-Uranus) can also be seen in this $738 billion defense bill authorizing paid family leave (support for nurturing/family!) in exchange for the creation of Space Force (boundary-pushing sci-fi military tech toys).

Impeachment charges were announced on Tuesday during the Taurus Moon void — exact time was 9:10 AM ET. Nothing of consequence? Just a routine procedure? Traditional astrologers argue that a Taurus Moon is in such a strong position that it can be effective when void. What’s interesting is that the Moon was conjunct P45’s Midheaven (career status) and square to his Leo Mars- Ascendant. The late degree Taurus Moon also activated Mars in the horoscopes of Nancy Pelosi and Moscow Mitch. There is talk of a vote on the impeachment being held in the House today, and if I ran the zoo, I’d wait until the Moon entered Cancer at 6:23 PM ET.

I see this week’s  Mars-Neptune trine and the Jupiter-Uranus trine reflected in the record-breaking contracts with certain lucky athletes, including the Yankees’ new pitcher, Gerrit Cole. The 29-year old superstar was born on September 8, 1990 in Newport Beach. We see this potential windfall in his current Saturn return and transiting Jupiter squaring his Virgo Sun. Of special note: a measurement between Uranus and Jupiter by transit and by solar arc (another way astrologer measure time). That can feel like a genie in a bottle. If you ever have one of those double-whammy patterns, make sure Santa knows what’s on your wish list.

And speaking of wish lists, if a gift certificate for a astrological consultation is what your friends and family want for the holidays, I’m happy to oblige. Here’s the 411 on personal consultations. Finally, the 2020 Really Useful Mercury Retrograde Survival Guide Bookmarks are in!! I will be happy to send you three bookmarks upon request — just toss $9.99 into my Cosmic Tip Jar and email me your snail mail address. Happy holidaze!

On the bookmark you’ll find the dates of 2020’s Mercury retrograde periods — there are THREE. You’ll also find helpful reminders of how to handle the retrograde so you do not lose your mind. These bookmarks make great stocking stuffers for everyone! Just ask Avid Reader Jane:

I would like to find out how much it would cost to get 10 Mercury retrograde bookmarks – I am so tired of my idiot friends who don’t get it, they just know something is off. To have your bookmark on hand to give them is the best idea ever.

Agreed! Or take it from Avid Reader Bonnie, who raves:

That bookmark was awesome. I kept it in my datebook and referred to it many, many times during the retrogrades :)