Count your blessings among whatever twists and flakes arise during today’s Capricorn Moon void. Yes, the need is to take care of business, orchestrating the preparation of your Thanksgiving feast like a military operation. But are you sure you bought enough Brussels sprouts? Chill and go with the flow! So far, no reports of any twists or flakes at the 91st Annual Macys Thanksgiving Day Parade, but the NYT has a summary of past parade snafus.

Counting your blessings is good for your health, as this op-ed in WaPo reminds us: “It’s 1967 and the world is going to Hell.”   In fact, it is 1967 all over again, as Avid Readers know, as we are in the aftermath of a revolutionary aspect between disruptive Uranus and destructive Pluto. Back then, it was the conjunction (meet-up) of these two behemoths; now it is the series of seven squares.

At 3:14 PM ET, Moon enters Aquarius, a perfect sign for friendship, community and appreciation of each other because of our quirks and foilbles. Happy Thanksgiving to all! On FRIDAY — a.k.a. Black Friday — the only exact aspect is an expansive one between the Moon and indulgent Jupiter at 10:56 AM ET. That — along with a harmony between Mercury (mindset, communication) and Uranus (technology, astrology) exact early Saturday — bodes well for retailers hoping shoppers will indulge in the latest gizmo or gadget. In the spirit of those planetary patterns, I’m pleased to offer my own Black Friday special if you are shopping for a Special Someone: 20% off personal consultations and reports — until the Moon leaves Aquarius at 3:04 AM ET on Sunday,  November 26th.  The closet artist in me loves to make my gift certificates by hand — each one is uniquely decorated with care. Did you know that milennials prefer experiences over the accumulation of material stuff?  Something to think about if you have a milennial on your holiday shopping list.

Moon goes void in Aquarius at 9:37 PM ET on Saturday and enters Pisces at 3:04 AM ET on Sunday. At 12:03 PM ET we’ll have the First Quarter Moon, offering a challenge to the New Moon agenda set on November 18th. If you have a planet or point around 4 degrees of Pisces, Virgo, Sagittarius or Gemini, you may feel a push — one way or the other — which requires an adjustment. A Pisces Moon seeks to identify and work with impressions and ideals. Note your dreams and…

It’s baaaaaack! The fate of net neutrality once again hangs in the balance as Saturn — planet of government and control — makes its way through the last degrees of Sagittarius and into early Capricorn. Man oh man are we going to see some bold initiatives as government moves to seize control of Sagittarian concerns, e.g., publishing, foreign service, judicial philosophy, higher education, freedom of speech.  Why will they be especially bold? Because the last degrees of Sagittarius are within range of the Aries Point degrees. The Aries Point degrees are 0 degrees of Aries, Cancer, Libra and Capricorn. Planets around the Aries Point are turning points — they correspond to the change of seasons at the equinoxes and solstices. They can’t help but attract attention. Example: Treasury Secretary Steven Mnuchin and his wife, Louise Linton. Both were born on a December 21st with their respective Suns at the Aries Point —  29 Sag for her; 29 Sag or 0 Cap for him — we don’t have a birth time.  I’d be quite surprised if you’d never heard of them or hadn’t seen their latest photo to go viral.

See how that Aries Point Couple totally pre-empted my discussion of net neutrality? You just can’t take your eyes off  them, can you? That’s the Aries Point in action. Meanwhile…. net neutrality is the idea that since taxpayer dollars paid for the invention of the internet, it ought to be treated as a public utility — with its content readily accessible to the people who paid for it — not under any control or restriction by a private corporation. But alas, no — the FCC — under the leadership of one Ajit Pai — may very well destroy the internet as you’ve known and loved it. The Big Vote happens at the FCC on December 14th. Here is Jessica Rosenworcel — an FCC commissioner who opposes the destruction of net neutrality — begging you to save it in an op-ed in the LA Times. Unfortunately she’s a minority voice on the FCC. What is there to do? Here is John Oliver’s must-see segment explaining what net neutrality is — and what he’s done to make it easier for you, member of the public, to cut through red tape and express your opinion. Don’t have time to watch the segment? Go to gofccyourself.com   — and express away. Express. Express!!!

And I hope you find time to watch John Oliver’s segment. In it, he makes fun of Ajit Pai’s Big Giant Orange Coffee Mug — but he can’t explain why Mr. Pai would ever have such a thing. If only John Oliver had asked an astrologer to look at Pai’s horoscope. She would have said that the Big Giant Orange Coffee Mug is a screamingly obvious expression of an exact conjunction between Pai’s Capricorn Sun and expansive Jupiter…this horoscope can’t help but the embodiment of  BIG.*- Be advised that this conjunction in Pai’s horoscope is going to be supercharged next year by transiting Pluto. This suggests an expansion of an already expansive ego expression — especially in the area of power and resources. Pai was born on Jan 10, 1973 in Buffalo NY — no birth time available  — for astrology buffs. Here’s the mug in question: 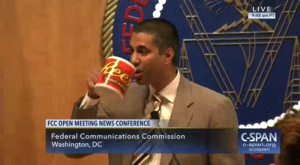 Meanwhile the mysterious oblong object that “hurtled past the sun” last month has been determined to be from another solar system. This is a first. Elsewhere, regarding the mystery surrounding the disappearance of an Argentinian submarine earlier this month, it is being reported that a loud underwater explosion was detected soon after the last known contact. The chart for the explosion, picked up on Nov 15th at 13:51 GMT, has shocking and disruptive Uranus right at the bottom of the chart. Not a hopeful sign.

In other news, gratitude to Avid Reader Melissa for making sure I did not miss a particular news item after posting this in the last forecast:

“Venus in Scorpio forms a cooperative alignment with Pluto in Capricorn, exact at 6:26 AM ET on Tuesday. Women, social expression and money — demanding substance and control — somehow in alignment with the Powers That Be?”

And guess what popped up in my email today from Variety?  Published at 6:06 am Pacific. “Female-Led Investor Groups Target Weinstein Co. Acquisition.”

That story certainly fits a Venus-Pluto pattern. Astrology is amazing.
Finally, obituaries are — as always — reflecting the potential  suggested by planetary patterns. This week, it’s Neptune pulling focus as it turned direct. Remember, Neptune refers to music, romance, spirits and other intangibles. RIP Della Reese, singer and star of Touched by an Angel; jazz great Jon Hendricks; teen idol singer/songwriter David Cassidy (who struggled with alcoholism and dementia — also Neptune concerns).  Cue “I Think I Love You” now, please. Of course it would start with a reference of a dream (another realm belonging to Neptune)…