Happy Thursday! The Moon is in Leo, driving the day with a need to shine, shine, shine — especially drama kings and queens.  Get it off your desk today and ship if you must; tomorrow (Friday) the Leo Moon goes void, suggesting nothing of consequence is likely to be initiated. Wonder if that will include the Senate’s planned procedural vote on the tainted Kavanaugh nomination. Mitch McConnell seems to be all for it — but those all-day Moon voids do raise the odds of twists and flakes.

Moon enters Virgo to clean up the mess on Friday at 7:19 PM ET, and there is talk of a final confirmation vote on Saturday. Note that the Virgo Moon will be in the final days of the lunar cycle, suggesting a sense of restlessness or listlessness, so what good is a dead moon anyway? I’ll tell you: if you want to get something done in a back room filled with obfuscating cigar smoke, that would be the time.

No sleeping in on MONDAY. The Moon will be in Libra, sign of justice, fairness and balance….but still technically dead until 11:47 PM ET, when the New Moon officially begins. 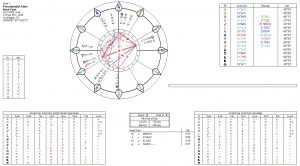 Coincidence or conspiracy? At least it gave late-night talk show hosts something to talk about.

Thank you for reading this forecast. Remember that Venus turns retrograde on Friday at 3:05 PM ET — it may be quite an effort to mind your manners. I expect we’ll see plenty of less-than–gracious social expression in the air over the next few weeks. For some, it will be about time. For others, it’s still a matter of debate.  For those in the former category, like this new font — which apparently allows people to remember what they have read — it may be Venus-in-Scorpio ugly, but it’s also Mercury-square-Pluto empowering.

Last but least, are you a woman over 40? If so, you may enjoy seeing my guest appearance on a Facebook Live session hosted by Jackie Morgan MacDougal, founder of Forty Thrive. Jackie and I were colleagues back in the day at NBC; now she’s helping women reach their full potential by coaching and inspiring. She also teaches how to produce podcasts. Today, however, we talked about astrology — and how it can be helpful to women who want to be Forty Thrive. Send me an email (just hit reply now and type away), if you would like to see our talk, and I will direct you to Forty Thrive on Facebook (it’s a closed group). We had such fun. Can’t wait to do more.