Since 3:37 AM ET, the energy of the day is being driven by the Moon in Aquarius, seeking to fulfill its need for social significance and to be appreciated for being unique. Aquarius refers to these keywords: innovation, eccentricity, friendship, humanitarian, unconventional, rocket scientist and/or mad genius. It is an airy — i.e., cerebral — energy and it is fixed, which is to say it is likely stubborn in thought and action, but also adept at bringing ideas together in an organized form.

There are two aspects of note today. First, the Venus-Saturn square we’ve been talking all week will be exact at 12:50 PM ET. By now, you should have a clear idea of how that pattern may be reflected in the headlines. Second, the Moon meets up with Aquarius Sun at 7:07 PM ET. Happy New Moon!

Let me first note the significant patterns happening this weekend. They are all part of the New Moon chart. First is Mars, now at the very last degree of Pisces – — about to enter Aries at 12:39 AM ET on SATURDAY. This suggests prominence —  fast and furious — in matters involving action, warriors, courage, cars, steel, aggression,  and sports, to name a few Mars keywords. Pisces refers to refugees, FYI. When Mars enters Aries, we can see the potential for action that is headstrong, impulsive, brave, aggressive, inspiring and/or pioneering. If you have a planet or angle around the first degree of Aries, Cancer, Capricorn and Libra, you are likely feeling energized — for better or worse — with respect to that planet or angle. Obviously this includes anyone born around a solstice or equinox.

Next up: Mercury, which today finally got back to 15 degrees of Capricorn, which is where it was when it turned retrograde on December 19th. So we may see the return of an issue that was active back then — with potent new information. December 19th was when the Electoral College met to vote — there’s more about that via the previous link. On  SUNDAY, Mercury finally meets up with Pluto at 3:18 PM ET. In general,  Mercury-Pluto contacts suggest news from underground; persuasive communication and ideas; investigations and corruption exposed.  But wait — there’s more: on TUESDAY at 10:31 PM ET, Mercury is challenged by rebel Uranus, suggesting information and communication that disrupts the status quo.  I would not be surprised to hear explosive news of  covers blown — possibly big time, given that all next week, Mercury will be supercharged by expansive Jupiter, exact on THURSDAY at 10:16 AM ET. Here’s an example: after 62 years, the woman whose allegations led to the murder of Emmett Till admits her story was false.

Have I mentioned that Neptune — which refers to fantasy, intangibles, compassion, forgiveness, delusion — to name a few — is currently running wild?

No Moon void on Saturday suggests you are free to shop impulsively. Moon will be void on SUNDAY between 12:52 AM and 11:10 AM ET — a time to chill or get some Mars in Aries action with your best Moon in Aquarius buddy. After 11:10 AM ET the Moon will be in Pisces, ideally seeking compassion for all who suffer; the the ability to see ourselves in each other; the intuition that flows from understanding this connection; and the melancholy that results when such depth of feeling can not be communicated (for lack of words or a receptive audience). These are some Piscean possibilities. Will ye sink or will ye swim?

And now, the New Moon. This is our chance to re-set intentions and goals for the next lunar cycle.  Make a list; light a candle; plant those seeds. Around Feb 3rd, on the First Quarter Moon, we can expect a challenge to those goals, with appropriate adjustments made. How are our seedlings doing?  Keep on nurturing them, and around the Full Moon on Feb 10th, they may flower. Illumination on the success or failure of our goals for the cycle is suggested, either way. If we succeeded, we can consciously release our success into our reality; if we failed, we let go of whatever did not work. Heads up that this Full Moon will be an eclipse. After the Third Quarter Moon on February 18th, we can harvest our achievements, tie up loose ends, compost and get ready to begin another New Moon cycle on February 26th — also an eclipse.

I calculated the New Moon chart using Washington D.C. for the location. It’s the capital of the U.S., and thus this chart offers a sneak peek of potential experience in the national arena. The angles of the chart —  the Ascendant and the Midheaven —  are 29 Leo and 24 Taurus, respectively. If those angles look familiar, it’s because they nearly exactly match another horoscope that has been discussed here many times: POTUS 45. Why is that significant? Because in ancient times, the horoscope of a king was considered to be a reliable map of the fortunes of the country. With the angles of this New Moon chart matching 45’s horoscope, we see the potential for this next lunar phase to be as personally significant to the United States as it is to him. 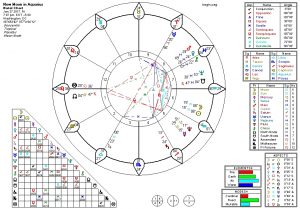 Notice that the 29 Leo Ascendant of the New Moon chart for Washington  is conjunct the Fixed Star Regulus, suggesting a need for a sterling presentation of the self-image…with success, so long as vengeance is avoided. It will be interesting to see what happens to initiatives made in this lunar cycle, given that 29 Leo is the degree of the August 21st Great American Eclipse.  Let’s see where they are at in early September, when the eclipse will be triggered by Mars and Mercury.

A 24 Taurus  Midheaven is conjunct the Fixed Star Capulus — suggesting a need for a public status of male aggression and sexuality. Another Fixed Star adding intensity to this highly energized New Moon chart is Scheat, which is conjunct Mars at 29 Pisces. This suggests potential for actions that backfire.

Fascinating sidebar: are you familiar with Astro-Cartography? This is a method by which you can discover what kind of experiences you are likely to attract, depending on where you live. Today I ran a chart for 45’s prospects, now that he has moved to Washington D.C. Guess what planet is exactly on the Ascendant of the relocated horoscope? MARS! So we can see the potential for his experience in D.C. to reflect these keywords: military, militant, anger, war, steel, action, courage, crusade. Have you ever had your Astro-Cartography done? It’s fascinating — and here’s how to contact me if you’re interested.

Another observation about Mr. 45 I may not have stated: overall patterns in the horoscope suggest a need for a defensive posture, developed out of a vulnerability to being victimized by circumstances. This week Russell Simmons warned his friend about the dangers of the latter. Gail Collins echoed this potential in her column, too — still under the effects of the heavy mindset suggested by transiting Saturn to her Mercury, no doubt.

…when a flag turns into an eagle, an idea or ideal is dramatically brought to life. One might possess revolutionary ideals for society and carry a flag that comes to be known for those ideals. Should the flag incite public passions to take action, the flag is infused with life, like heat applied to water that comes to a boil.

“Revolutionary ideals” — sounds apt for a New Moon in Aquarius. You are more personally affected by the need to turn an ideal into action if you have a planet or angle around 9 degrees (a third of the way through) Leo, Taurus, Scorpio and especially Aquarius. Like George Orwell, for example.  1984 — his famous novel — is a best-seller again.   He was born near the Summer Solstice, so Mars is energizing his horoscope, too — along with other planetary patterns.

We can see shades of the potentially controlling Venus-Saturn square combined with the prominence of macho Mars in these stories. In Russia, “some forms” of domestic violence have been decriminalized. Harsh. Newly-confirmed U.N. Ambassador Nikki Haley “issued a stark warning…to allies and rivals abroad,” reports the NYT. Tough. Mike Pence and Kellyanne Conway spoke to thousands of  people at the annual “March for Life.”  Christiane Amanpour said on CNN that the media would not shut up, as Steven Bannon said it should do on Thursday.  We’ll have Saturn in Sagittarius all year, increasing the potential for controls in matters of speech….

…and foreigners. Today an executive order was issued banning travelers from seven Muslim-majority countries: Iran, Iraq, Syria, Yemen, Sudan, Libya and Somalia — including U.S. green card holders. Egypt, Saudi Arabia and the U.A.E. were not included in the ban — and they are countries in which Mr. 45 has business interests. Coincidence or conspiracy? The ban appears to violate U.S. law.

Here’s one that is super-depressing: a new study says that girls as young as six think that being brilliant is just for boys.  Still??? In other news, the Doomsday Clock has been moved forward by thirty seconds.  It’s now 11:57:30 PM. Meanwhile, here are this week’s  “five best” essays from conservative media sites, courtesy of the Guardian. Saturn with Venus tends to be more conservative than, say, Jupiter or Uranus with Venus. Those patterns won’t happen again until May….

…and we need a lift to get us through the weekend! May I suggest seeing Hidden Figures?  It’s the true story of three brilliant African-American women of steel who worked at NASA in the early 60s. Their genius helped rocket astronaut John Glenn into orbit. Their wardrobes are fabulous! Take all the little girls you know to see it, so they can see how brilliance isn’t just for boys.

To find out what opportunities are likely to present themselves for you in these verrrrrry interesting times, consider scheduling a personal consultation. We will have an excellent discussion together.