Here’s how I know Mercury is under stressed aspects this week: I haven’t been able to ship the forecast I wrote and tried to send yesterday. I can’t figure out for the life of me why Mailchimp has refused to send it out, but the amazing Mark Marshall at Interage is working on it.

For future reference, forecasts are always posted on my website before Mailchimp sends them out. They are also posted on Twitter — @graceastrology —  so do check those sites occasionally if nothing has been sent to your inbox.

Intuition, feelings, and other sensitivities have likely been on the rise today, reflecting the waxing Full Moon in Pisces, exact at 7:54 PM ET. ‘Tis the Harvest Moon, and CNN has all the info on why this Full Moon is so big in the sky because they looked it up on the website of EarthSky). Good job, CNN!

A Full Moon offers illumination on opposing needs. Full Moon in Pisces takes in the dry, critical faculties of the Virgo Sun and reflects back a need for a dreamy vision. Here is the chart for the Full Moon, set in Washington, D.C. It contains a few patterns in effect not only this week but for the next few months. 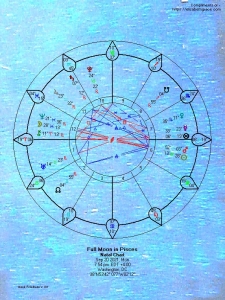 Here’s the forecast for the rest of the week:

A pause, while we talk about Libra. It’s an airy, mental sign, generally concerned with relationships, social graces, and promoting fairness, justice, and balance. Its ruling planet is Venus, which can be oh-so-sweet and socially gracious. Libra’s mantra is I BALANCE. This does not mean Librans are balanced; it means they generally are seeking balance and are quite capable of swinging back and forth wildly as they search for it.

Did you know that Fox News (motto: “fair and balanced”) launched under a Libra Sun? If you’re now thinking “wow, there must be a lot more to a horoscope than just a Sun Sign,” I commend you. As sweet as Libra can be, they are not marshmallows. The term “iron fist in a velvet glove” often applies. Jimmy Carter is a Libra. So was Margaret Thatcher.  Tim Robbins, John Lithgow, Lee Harvey Oswald, Julie Andrews, and Maria von Trapp (inspired casting?) — all Libras.

The Sun’s ingress into Libra means that it’s the first day of fall. Did you know that the Sun is considered to be in its fall when it’s in Libra? In the language of astrology, when a planet is in fall, it means it is traveling through a sign that is not compatible with the planet’s essential nature. The Sun is all about ego recognition, around which everything (and everyone) revolves. It needs to be this way. But Libra needs to be focused on WE, not ME. Maybe that’s why one of Libra’s traits is indecisiveness.

Back to the week:

Stay tuned to this channel for updates. There is a lot going on in the cosmos over the next several weeks — too much to fit into one forecast, as Heather Cox Richardson observed.

Here is Beth Owl’s Daughter’s Tarot Card of the Week.

To schedule a consultation, here’s the 411.