The Moon is in Taurus, at the very end of its cycle. In such times we may feel listless or restless, sensing that something new is just around the corner, but we don’t know what. With no light from the Moon, it’s a fine time for clandestine meetings or actions you’d rather see fly under the radar. If the air felt heavy overnight, you may have sensed the square between the Moon and Saturn, exact at 10:54 PM ET on Monday. It was the last aspect the Moon will make until 2:59 PM ET today(TUESDAY), when the Moon meets up with the Sun. Happy New Moon in Taurus!

Here’s what the chart looks like, set in Washington, D.C.: 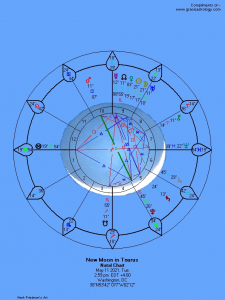 After the New Moon at 2:59 PM ET, Moon sextiles Neptune. Note your dreams, even if you’re awake.

If you find these forecasts of value, you are cordially invited to support them with Faithful Monthly or Joyful Random Expressions of Appreciation. If you’re thinking, “Hell, yes! I do find these forecasts Really Useful!” and you happen to make use of the Cosmic Tip Jar, you will make my day.

Stories reflecting the bewildering potential of Neptune running wild were rampant, especially in the United States, where Neptune is activating the U.S. Mars-Neptune square. Avid Readers will recall that this square symbolizes America’s idealization of cowboys, guns, soldiers, and its own ego (i.e., “American exceptionalism,” as astrologer Bill Herbst skeptically explains), as well as Hollywood fantasies, its notion of the “American Dream,” the current opioid crisis, and cults of all kinds. Last week’s trine between Venus and Pluto suggested we’d have stories of women and power plays, as well as intriguing “news from underground.” Here’s a sampling:

Over the weekend Venus in Taurus squared Jupiter in Aquarius. Financial expansion and indulgence were anticipated, and the stock market reached yet another new high.  Factor in a runaway Neptune, and you might have heard that Jeff Bezos has ordered a “super yacht” that’s longer than a football field and will cost $500 million. He’s also been selling boatloads of Amazon stock. We don’t have a birth time for Bezos, but we can see his horoscope was also activated by Mars at 10 Cancer last week.

Mars also activated the horoscope of Ben Affleck, whose Venus sits on his 8 Cancer Ascendant. Transiting Mars on Venus can spark romance, and for Affleck it “coincided” with a presumed romantic getaway with Jennifer Lopez, a former fiancee. No birth time is available for Lopez.

I leave you with this intriguing headline from New Scientist: “Measuring Time Accurately Increases Entropy in the Universe.”  Entropy is defined by Professor Google as:

PHYSICS
1. a thermodynamic quantity representing the unavailability of a system’s thermal energy for conversion into mechanical work, often interpreted as the degree of disorder or randomness in the system.

2. lack of order or predictability; gradual decline into disorder.

“a marketplace where entropy reigns supreme”

What does this suggest for astrology, I wonder. What do you think?

Here’s the 411 on consultations. We will have an enlightening discussion together. 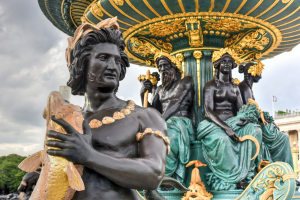