The me-me-me Aries Moon went void with a long sigh at 4:47 AM ET. Meanwhile, it’s a “dead” Moon — at the end of the cycle. Stick to routine concerns; wrap up projects from last month. Roll with any twists or flakes that may disrupt your efforts to move forward in a straight line. Once the Moon enters Taurus at 4:18 PM ET, you may sense a buzz in the air, adding to the dead Moon’s restlessness. That buzz is Uranus, planet of disruption. It meets up with the Taurus Moon at 10:15 PM ET, jolting the Collective’s need for material comfort and security, for better or for worse. Watch the headlines.

Also of note: Mars, planet of action, is nearing its exact opposition to Jupiter, planet of BIG. Mars is activating one of the dominant patterns of 2019: the Jupiter-Neptune square, discussed in January:

Another dominant pattern for 2019 in this New Moon is the first of three squares between Jupiter and Neptune (exact on January 13th, June 9th and September 21st). Pushing the limits of faith? In Sagittarius, Jupiter refers to expansion and/or excess in matters including, but not limited to: opinion, dogma, horses, liver, pancreas, optimism, bombast, foreigners, media, law. In Pisces, Neptune refers to fish, oceans, drugs, spirits, lies, fog, refugees, victims, gurus, viruses, chemicals, toxins, suicide, etc.  Here’s one of many headlines reflecting this pattern: “Japan’s Sushi King Pays $3 Million for Giant BlueFin Tuna.” That’s one BIG (Jup iter) FISH (Neptune), and it wouldn’t command such a high price if it weren’t so SCARCE (Saturn-Sun-Pluto conjunct in Capricorn)

Add sports and academia to that list of Jupiter matters and scandals, fantasy, film and scams to the Neptune column.  Last week, Mars activated Neptune (by square). As it makes its way to Jupiter, now do you understand why we’ve been seeing so many BIG headlines on Jupiter-Neptune concerns?

The only exact aspect ET on SATURDAY is the New Moon in Taurus. Make a list and set your intentions for what you’d like to accomplish when the new cycle begins at 6:46 PM ET.  A New Moon in Taurus needs to build material stability and security. So what do you need to have? No really, what? That’s the mantra for Taurus: I HAVE. How creative can you get when it comes to acquiring what you need? If Aries is the spark that generates an idea, Taurus takes that idea and gives it form.

Wherever 14 degrees of Taurus falls in your horoscope is the area of your life that is primed for planting those seeds. I challenge you to do the work required to make those seeds grow. Sure, you can spend this time rolling in the meadow, smelling the flowers. But if that’s all you do this month, you could be missing out on a prime opportunity.  Don’t know where 14 Taurus falls in your horoscope? That’s what your astrologer is here to tell you — in a personal consultation or a written report. Here’s the 411.

The Sabian Symbol for this New Moon is “a man muffled up, with a rakish hat.” “Muffled up,” is he? Can’t get the words clearly out of his mouth? And his hat — another part of his cover — is “rakish?” And made of silk — so smooth and rich — and comes from China? Sounds like an intriguing character. How will this image play out in the headlines this month, hmm? As always, we consult Blain Bovee’s wonderful book on Sabian Symbols for details:

“…consider muffled voices, mumbled words; inclined postures; dropping the ball and getting away with it; a playful knack for apparel and appearance; openness to new ideas, new worlds; creating happy sensations; detachment from disintegrating worlds, from social perception, from transient perception.”

In the New Moon chart set in Washington DC, it is interesting to see the Ascendant at 29 Libra — same as last month’s Libra Full Moon. We’re at the end of something for sure. Venus in Aries rules the chart; this is a “warrior woman” expression which is traditionally not well-received: fiery and strident, less concerned with social graces and charm. The values of Venus in Aries have a steely, ruthless focus — for better or worse. In its effort to champion the cause, it may feel as if it’s between a rock and a hard place. Why do I say this? Venus is squaring Saturn, the North/South Node and Pluto.  Its steely ambition, added to the Mars-Jupiter-Neptune Big Thing is reflected here: 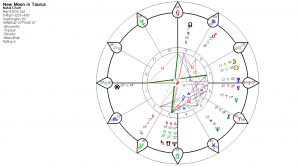 With respect to the United States, the New Moon horoscope suggests revelations, shocks and other disruptions of the status quo. Uranus is hitting all angles of this Washington DC chart. The New Moon is in the 7th House — a hopeful sign, perhaps — since this is the house related to the public, and what happens here is usually seen, not hidden. And what will be seen is likely to be BIG, suggested by that aforementioned Mars-Jupiter opposition at 22 Gemini/Sagittarius, activating the U.S. Mars-Neptune square (guns, cowboys, the American Dream, drugs, Hollywood, etc.) and the horoscope of P45 — and scores of public figures associated with U.S. politics/government.    Check out that post from 2017 and you’ll find excellent tidbits on the horoscopes of Russia and Adolf Hitler. The latter’s horoscope has been quite active in recent years — which should surprise no one, given what’s going on in the headlines. The horoscope lives forever, doncha know.

Mars (weapons) in Gemini (words) — blown up by Jupiter in Sagittarius (publishing, opinion) and fogged up by Neptune (scandal, deception). Add this week’s hyperactive Mercury (words) in Aries (fast, furious, pioneering, out of sync) — and it sums up the latest on the Mueller investigation.

Random upbeat news: “Maine becomes first state to ban styrofoam.” Huzzah! And as Maine goes, so goes the nation. So they say.

UPDATE: Senator Michael Bennet (D-CO)  announced his presidential run, bringing the total of Democratic contenders to 7, 243.  Bennet’s announcement is no surprise to anyone reading this forecast back in January.

UPDATE: Nicolas Maduro, last written about in January, in which April and May were declared months to watch. Some have been tempted to say that Maduro is going to get thrown out any minute now — and millions have taken to the streets, as transiting Saturn squared his Midheaven a few weeks ago. Today, what was supposed to be the “largest” protest march in Venezuela, called by opposition leader Juan Guaido, appears to have petered out. During a nearly all-day Moon void? Dead, no less? No surprise here. Saturn will hit the Midheaven again on May 11th — but there’s more bang for the bucks in July, when transiting Uranus shakes up Maduro’s Saturn (structure/authority) and transiting Pluto opposes his Ascendant for the second time.