As of 11:09 PM last night (Friday), the Aquarius Moon is void — and will be void ALL DAY. Chill, chill, chill — and no impulse purchases, as planetary patterns exact on Sunday suggest you may go overboard.  Note that we are at the end of the lunar cycle, a time to wrap up projects and get ready to begin anew. During these “dead” Moons, we may feel restless or listless. We may also be inspired to schedule an activity we hope will fly under the radar.

On SUNDAY — Moon enters Pisces at 1:37 AM ET, but won’t officially be New until 10:32 AM ET. The other big pattern exact on Sunday is a potentially indulgent square between Venus and Jupiter at 11:59 AM ET. You are more personally affected by this square if you have planets or angles around 18 degrees of Aries, Cancer, Libra or Capricorn. I happen to fall in this category, and have responded to a need for expanded (Jupiter) beauty (Venus) by snapping up two absolutely gorgeous chintz April Cornell tablecloths, along with assorted napkins and napkin rings that were on sale at the local Pier 1 Imports which — like many retail stores in this era of Uranus (disruption) in Taurus (things) — is closing its doors. Knowing how Venus and Jupiter are activating my horoscope enables me to understand my buying impulses — and appreciate how apt they are at this time!

Here is the chart for the New Moon, set in Washington DC: 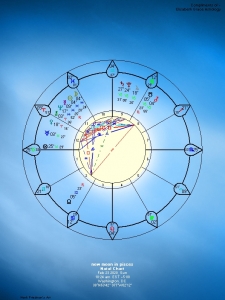 A Pisces Moon needs to identify and work with impressions and ideals. Pisces keywords include empathy, endings, spirits of all kinds,  suffering, at-one-ment, victimization, refugees and other displaced persons society tends to hide under the nearest rug (or hospital or prison or religious institution or subconscious). In the DC chart, the New Moon sits in the 11th house — of hope (for reward), friends, groups and administrative agencies of the government. The seeds of this New Moon are sextile Mars in high-functioning Capricorn, enabling these seeds to be put into action. Should we be concerned that this high-functioning Mars is soon to meet up with the South Node, a point of potential toxic release and destruction? I don’t know, but whatever is released is likely to be quite public, as the Midheaven of this chart is at the midpoint of the energizing Sun-Moon sextile to Mars.

Are the seeds well thought-out? Mercury — symbol of mindset and communication — is in intuitive Pisces, favoring belief over facts. Mercury is also retrograde, and so close to the Pisces Sun that it lacks objectivity. What do you think? Time to believe in a dream?

The Ascendant of this chart is Taurus, ruled by Venus in me-me-me warrior Aries — possibly doing itself in from its position in the 12th house, aided and abetted by that expansive square to Jupiter, seeking status and authority in Capricorn. Not only that, but the 25 degree Taurus Ascendant is conjunct Algol, traditionally thought of as one of the most unfortunate fixed stars. It is associated with beheading and other ways of “losing one’s head.” It is also a symbol of fierce feminine power — as in the Medusa, a.k.a. the Gorgon’s head. But for all its fearsome imagery, Algol does have a positive potential, as explained here.

People who have planets and/or angles around 25 Taurus include: Nancy Pelosi, Moscow Mitch, Mike Bloomberg and P45. Watch them in this New Moon news cycle.

The Sabian Symbol for this New Moon is “a church bazaar.” That’s interesting, given that the Symbols for the Full Moon in Leo also had a religious/spiritual connotation. Sabian sage Blain Bovee offers this positive interpretation:

… could be defined as tolerance, compassion and sharing capacities.

Just imagine a church bazaar where the issues of divergent tenets is not of any importance. People of all walks of life, all faiths and position are brought together under the house of divine presence to trade in a community form of spiritual commerce. Something for everyone. Everybody wins… and, even though explosive issues may brew under the surface, everyone is treated with equal measure of civility, grace and friendliness.

It will be interesting to see how this noble and egalitarian potential manifests in U.S. news, wearing the mask of that 25 Taurus/Medusa Ascendant. You will be more personally inspired to plant seeds of inspiration if you have a planet or point in your horoscope around 5 degrees of Pisces, Virgo, Sagittarius or Gemini. Consult your local astrologer for details.

Meanwhile, “Let the Moon Rush Begin” is an apt op-ed for a week with “out there” Uranus in harmony with the Sun and go-go-go Mars. The latest chapter in the adventures of red giant Betelgeuse is also apt. So is “What is a Boogaloo?,” given how Uranus symbolizes rebellion, and how prominent Mars is at this early stage of Capricorn (and also out-of-bounds, as you may recall from the last post).

Avid Readers may recall that February 13th was a significant date in the horoscope of P45. That’s when he had the first of three hits of Pluto (extremes, power, breakdown) opposing his natal Saturn (structures, control, ambition). Whatever will be, will be heavy. And what we found out this week is that on February 13th, Congress was informed that yes, Russia is once again using its resources to help P45 win the election. P45 found out about it after the fact, as Heather Cox Richardson explains.   He’s responding with out-of-bounds efforts at extreme control, firing Joseph Maguire, his former Acting Director of National Intelligence, and replacing him with a totally unqualified “toadie.” That would be Richard Grenell, who is the U.S. Ambassador to Germany, and will continue to wreck that diplomatic outpost while purging our intelligence agencies of presumably anyone P45 doesn’t think is loyal.

Here is the fascinating part, given the chart for the New Moon in Pisces. Grenell is launching “Objective Medusa” – I kid you not — and you can bet that heads will roll.  What inspired that name? Do they have an astrologer on staff? I hope not.

Born on September 18, 1966 in Jenison, MI, Grenell is a Virgo whose Sun is opposed by Saturn and conjunct Uranus-Pluto. This is a likely rebel with a challenging childhood, and anxious about getting it right.  He is driven by a Scorpio Moon that is probably conjunct Neptune (we don’t have a birth time). In turn, Moon and Neptune are both likely squaring Mars in “get away with murder” Leo. What is it with so many would-be authoritarians with Mars in Leo? It’s almost like it’s a pattern.

In any event, this is a person who needs to be appreciated for depth, substance and control; the Neptune contact suggests idealism, possibly to extremes. His Mercury is in Libra and was just squared by Mars, which would be one astrological event reflecting why we are hearing about him now.

And so, like that. What’s going on in your horoscope? Are you likely to be moonlighting as director of a large government agency whilst keeping your day job as an ambassador anytime soon? Here’s the 411 on personal consultations…and here is my lovely Venus square Jupiter tablecloth. Like it? 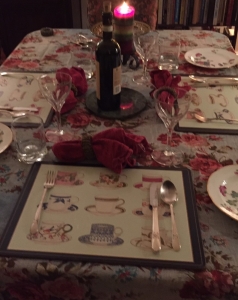