Moon is void of course in Pisces for most of the day on Saturday. If you are new to this forecast (welcome!) and don’t know what a Moon void is, here’s the 411.  The void started at 6:49 AM ET and will end at 7:44 PM ET. Now is the time to sleep in; roll with the twists and flakes that may disrupt efforts to move forward in a straight line. Go with the flow; don’t freak out over perceived “crises” that may crop up; they are likely much ado about nothing and will resolves themselves once the Moon gets back into gear. Avoid impulse purchases; stick to routine. Chill!

See if you notice the shift in energy tonight, once the Moon charges ahead in me-me-me Aries. An Aries Moon needs to lead and inspire. Use that fiery drive on Sunday and Monday, aided and abetted by two Really Helpful Planetary Patterns, in effect now. First is an alignment between Venus (social expression, money, women, aesthetics) and Saturn (structure, ambition, patriarchy), exact on SUNDAY at 9:27 AM ET.  This is the third in a series that began on September 12th; the second happened on October 24th. If you’re seeing a recap of issues in your life that were hot on those dates, your horoscope is personally affected by this pattern. If you have a planet around 2-9 degrees of Capricorn, Aries, Libra or Cancer, this means you. Perhaps you reviewed your financial plan — aptly so during the recent Venus retrograde — and now you’re getting ready to implement it. That’s one of many possibilities.

The second Really Helpful Planetary Pattern is an alignment  (a sextile) between Mars and Pluto, exact at 1:53 AM ET on MONDAY. Mars refers to action and courage; at present the energy of action may be expressed as diffuse or steamy, as Mars is still in Pisces. Upside: action/courage arising out of empathy, intuition or compassion. Pluto refers to power and resources, suggesting an ease of accomplishment. You are personally affected if you have a planet or angle around 20 degrees of just about any sign.

Back to SUNDAY, where practical exuberance may be squelched (downside) or advanced (upside) around 2:21 PM ET, when the crusading Moon is squared by a Designated Authority Figure (Saturn).

No sleeping in on MONDAY. The Aries Moon is going full speed ahead, and the work week begins with an emotional catharsis or power play, as the Moon makes its weekly clash with Pluto at 10:20 AM ET. Other than that, overall planetary patterns are less tense now and next week.  Push for that innovative, humanitarian vision. If your horoscope is personally affected by upcoming patterns, we see the potential for big news that gets noticed, especially on this FRIDAY’s winter solstice. Consult your local astrologer for details.

Have you ordered your supply of  2019 Really Useful Mercury Retrograde Bookmarks? At only $11.88 for three bookmarks, it’s hard to find a more cost-effective stocking stuffer — guaranteed to last for an entire year!   Toss your silver into my Cosmic Tip Jar, and email me your snail mail address. I’ll put those Really Useful Mercury Retrograde Survival Guide Bookmarks in the mail today

But perhaps you are feeling more generous? Gift your friends and family with clarity, direction and empowerment.  A personal astrological report and/or consultation is jam-packed with information to last a lifetime. I will happily mail a gorgeous gift-certificate anywhere in the world. Choose from these options.

Friday ended on an especially assertive/combative note, suggested by a meet-up between the Pisces Moon and Mars at 9:19 PM ET. The big story in the early evening news dump: “A judge in Texas rules that Obamacare is unconstitutional.”  Are we surprised? Not at all — as we see in my last post about the fate of the Affordable Care Act from January 2018 (where you will find ACA’s horoscope):

Looking at future transits, there’s a lot going on in the fall of 2018 to suggest a radical overturning of the status quo, and a revolutionary intensification of the ACA’s prime directive: to create and maintain emotional security in ways that are nurturing. At the same time, we see a potential streamlining — OR — an ambitious advance. The ACA has a Cancer Moon, ruling a prominent Cancer Ascendant. Contacts to the Moon from Pluto, Saturn and the Sun suggest anguish and power plays and patriarchal opposition– apt, no? The ACA is mostly fire, water and cardinal signs. We can see how it would be likely to change form.

The ACA horoscope was hit by disruptive measurements (solar arcs, for astrology pros and students) from Uranus to Pluto and the Moon in September and the end of November, respectively. What happened in September? A judge in Texas heard arguments challenging the constitutionality of ACA. Interestingly enough, by November many Republicans running for office voiced support for the pre-existing conditions provisos in ACA, while accusing Democrats of trying to destroy them (!!!). Yesterday, ACA’s natal Venus (in caring Cancer) was exactly squared by Pluto, suggesting emotional overkill; taking a sledgehammer to a project when a teensy little mallet would far better serve. Thus we get a ruling tossing the whole baby out of the window, along with the bathtub.

The odious judge in this case — Reed O’Connor — is a man of Federalist Society mystery. We know he was born in Texas in 1965 and that’s it. Thus we know he carries the seeds of the revolution in his horoscope (especially if he was born late in the year),  as 1965 marked the first of three conjunctions between Uranus and Pluto in Virgo. Yes, in Virgo, which refers to health, thank you very much.

Guess what else was born in 1965? Medicare — signed into law on July 30, 1965 in Independence, Missouri — shortly after 3:09 PM.  Here is that chart — I chose 3:15 PM as a time — it could have been a little earlier or later, but Sagittarius rising, regardless. Plus I like the 21 Virgo Midheaven squared by Jupiter at 22 Gemini, as it engages the Mars-Neptune square in the U.S. horoscope. With transiting Jupiter activating all of the planets/angles in this chart that are in Virgo, Pisces, Gemini and Sagittarius, it’s hard for me to believe that Medicare (and by extension, ACA) won’t be on an expansive bent. Efforts to curtail expansion may crop up when transiting Saturn squares Medicare’s 17 Libra Mars in 2019, but 2020 looks revolutionary and potentially empowering (look for clues in Medicare’s development during 1976 and 1997). 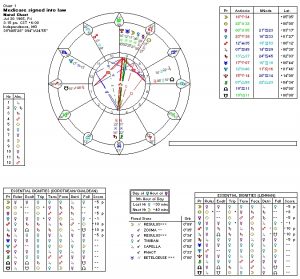 Meanwhile, the deadline for signing up for your 2019 Affordable Care Health Plan is TODAY. Here’s what you need to know.