“All my life I have found reassurance in the countryside; have found sorrows and anxieties benefitting from a walk through a meadow. Something to take my mind off its particular worry, as refreshing and restoring as a cool drink on a hot day.” ~C.R.Milne

(That’s a quote from the real Christopher Robin, the son of A.A. Milne, author of Winnie-the-Pooh.)

You could have spent time wandering through a meadow this morning, as the Aquarius Moon was void between 3:18 AM ET and 11:34 AM ET. If you are new to this forecast, here’s a link to the 411 on Moon voids.

Once the Moon enters Pisces, the focus shifts to a need for ideals and impressions; empathy and yearnings of the soul. A Pisces Moon is excellent for a day of at-one-ment, as Pisces understands that separation is an illusion. We are all one. Unions are favored all day and night, reflecting a rare harmony between Mars (the need for action; yang) and Venus (who, what and how we need to love), exact at 9:02 PM ET. Mars is in Aries (still retrograde); Venus is in Leo. Their trine suggests fiery drama, improvised — and in flow. 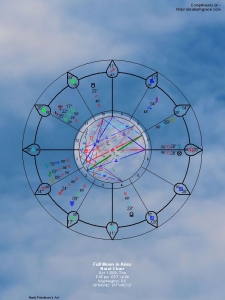 Given current breaking news (about P45’s taxes), it’s interesting to see Venus (money; values) literally in the face of the public as it sits on the Descendant of this chart. Venus rules the 3rd and 8th houses here — documents and debts! The surge of energy required to “make the unmanageable manageable” is suggested by Mars squaring Pluto. A stroke of genius is suggested by Mercury’s opposition to Uranus; Mercury is in the 8th house, digging for information in Scorpio! Also of note: it’s not just Saturn demanding our focus in this chart. Pluto is also about to turn direct (on Sunday), highlighting news from underground, extremes of power and resources. The action will unfold as the crusading Aries Moon challenges three planets in Establishment Capricorn (described below, as we continue with the day-by-day forecast):

Based on the chart for last week’s Autumnal Equinox (set in Washington DC), we anticipated a wild ride. Remember that the Ascendant was 0 degrees of Scorpio? Guess where Mercury (information) was yesterday? 0 degrees Scorpio — as of 3:41 AM ET.  As citizens of the United States we would anticipate news of ruthless depth,  and substance, and right around suppertime, the NYT dropped its ruthlessly deep bombshell analysis of 18 years of tax returns that P45 didn’t want the public to see. If you’re not an NYT subscriber, here’s Heather Cox Richardson’s summary — but if you’re a fan of fine writing, the NYT story is one to be savored (perhaps with a glass of fine wine), e.g.:

The picture that perhaps emerges most starkly from the mountain of figures and tax schedules prepared by Mr. Trump’s accountants is of a businessman-president in a tightening financial vise

Bottom line: the tax returns suggest he’s a loser and a fraud. He paid  $750 in federal income taxes in 2016 and 2017. Most other years, he paid $0. He is personally in debt to the tune of over $400 million — but to whom? Meanwhile, WaPo reported on P45’s thwarted efforts to seize control of his father’s estate (and there are tapes).

Where do we see the potential for this data dump in P45’s horoscope? As long as he is the White House Occupant, what happens in his life affects the nation, so here we go. The timing is amazingly in sync with patterns, as always. Avid Readers may recall what was going on a few weeks ago, when Mary L. Trump’s secretly recorded conversations with her aunt, Maryanne Trump Barry, were published in WaPo. Transiting Mars (ruler of P45’s 9th house) squared Venus (ruler of his Midheaven and his 3rd House) for the first of three in a series. We see a potential attack (Mars) in matters of publishing (9th house), impacting his professional status, reputation and mindset, siblings (MC, 3rd house). The second square happened around 3 AM ET this morning. Plus, on this second hit, transiting Saturn (debt, karma) AND Pluto (breakdown, power, transformation) are sitting closerthantthis to their third oppositions to Venus. Getting real in the extreme about values and money?

Not only that, but on September 25th (perhaps when the NYT reached out to the Trump Organization for comment), transiting Uranus squared his Pluto for the second of three hits. Uranus-Pluto patterns are nearly always disruptive. Looking ahead, we anticipate the following developments:

As anticipated, P45 nominated Amy Coney Barrett to grab Ruth Bader Ginsburg‘s seat on the Supreme Court. Senate Majority Leader McConnell fully intends to ram her confirmation through the Senate — over and above all other priorities. Isn’t it interesting how often we’re seeing the words “battering ram” or simply “ram” as warrior Mars travels through Aries, sign of the Ram?

Isn’t it also interesting that Barrett and Senators Ted Cruz and Amy Klobuchar all have planets at the Aries Point, which was activated last week by the Sun’s ingress into Libra. For those who may be exhausted and disheartened by the never-ending scandalous destruction of all normal rules of engagement, watch Senator Klobuchar respond to Senator Cruz’s snark re: objections to moving full speed ahead on Barrett’s confirmation hearing. On full display is Klobuchar‘s eloquently informed and intense Sun-Moon in Gemini. Her Mars is in Aries; she’ll fight fiercely for the underdog. Transiting Jupiter is right on her Saturn, adding to her focus and need to be righter than right. It’s no surprise that the video went viral and that WaPo columnist Jennifer Rubin named Klobuchar “Distinguished Pol of the Week.”

Meanwhile, Judge Barrett was officially nominated on Saturday at 5:06 PM ET, just as the Aquarius Moon met up with her 7 degree Aquarius Sun. She also has Mars in Aries, as part of a Grand Cross with Moon in Cancer, Mercury in Capricorn and Jupiter in Libra. All four planets are under pressure from transiting Jupiter, Saturn, Pluto (in Capricorn) and Mars. Transiting Uranus is activating her Sun, challenging her ego identity and/or presenting opportunities for her to be herself without compromise. She may surprise a few people between now and early 2021. We don’t have a birth time, but the horoscope is obviously hot — or she wouldn’t be in the headlines.

As for the ultimate success of her confirmation hearing, being rammed through anything during a Mars retrograde is ill-advised. Those doing the ramming may have cause for second thoughts. But as of yesterday, the Senate had the votes to proceed, as John Oliver explains in yesterday’s Last Week Tonight

A collection of headlines about Mars-Saturn blocks, for better or worse:

In  the maddening swirl of this turbo-charged news cycle, important stories can fade away in a millisecond. Last week, The Atlantic made waves when it moved up the publication date of a story outlining exactly how P45 could execute a plan whereby he refuses to concede, keeping him in the White House — far away from prosecutors. The Atlantic has done its homework in The Election That Could Break America.

Venus trine Mars suggests fiery desire; Saturn at its station puts elders and reality in focus. Thus, “It’s a myth that women don’t want sex as they age, study finds, ” whereas abortion is a hot topic in Argentina.  Also: “Romance meets the real world” in the book, Real Men Knit.

Closing — as always — with something to brighten your day — this time from the Good News Network.

What’s going on in your horoscope? If you have planets in late Aries, Cancer, Libra and/or Capricorn, I expect you’ll be quite busy between now and mid-January. In 2021, Taurus, Leo, Scorpio and Aquarius will have their turn in the hot seat. Pisces, Sagittarius, Gemini and Virgos born two thirds of the way through their signs may be off in search of a dream. Here’s the 411 on personal consultations.

Saturn is not to be feared.

Where would you be without its structure?

Living in a field with no roof over your head!