The Leo Moon squared Uranus at 5:33 AM ET, suggesting an upset to the status quo that might get East Coasters out of bed. And in fact, I did wake up this morning before my alarm went off. Coincidence or conspiracy?  A Leo Moon needs to shine — and those are your marching orders today. Be creative in the ways that only you can be — and look for ways to help others shine, too. When was the last time you paid someone a compliment? Try it, you’ll like it — especially with the Moon in a cooperative connection with Mercury at 10:53 AM ET. Mercury refers to how we need to think and communicate.

The past few days and next few days are under the influence of the Virgo Sun’s trine to Pluto at 7:05 PM ET, as well as  its  trine to Saturn on THURSDAY. We see an easy consolidation of earthly power and structures in all matters of will. Could be a CEO or head of state — but it also applies in your own personal world, especially if you have planets between 17 and 26 degrees of Aries, Libra, Cancer and Capricorn. What is consolidated likely incorporates the big vision — or delusion — of last week’s patterns involving the Sun, Jupiter and Neptune.

Here is the New Moon in Virgo, set in Washington DC: 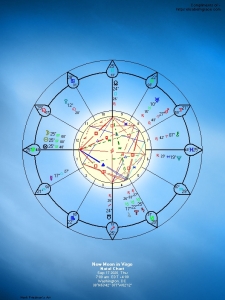 It’s fascinating that this New Moon is happening exactly at sunrise — notice the Sun and Moon are sitting right on the 25 Virgo Ascendant — but in the 12th house, not the 1st. There’s a private, insider’s perspective suggested. The Sabian Symbol for the last New Moon — in Leo — was….”daybreak.” Remember? And now we have an actual daybreak. I don’t believe I’ve ever seen a horoscope with Sun-Moon exactly on the Ascendant. What you see — symbolized by the Ascendant — is what you get (the energy of the Sun, driven by the needs of the Moon). It’s all about discernment, refinement — a mental, practical, earthy refinement of details seeking perfection. Hmm.

Sun-Moon-Ascendant in Virgo are past their respective trines (harmonies) with Jupiter (expansion), Pluto (power/resources) and opposition with Neptune (fog/vision). Next stop: a harmony with Saturn in Capricorn, looking to structure those details into an ambitious, authoritative form. Hmm.

Both the Ascendant and the Midheaven are ruled by Mercury at 17 Libra, which 1) is exactly square to Jupiter; and 2) is sitting right on P45’s Jupiter.  In general, we anticipate seeds for a big communication initiative or an opinion — in publishing or the courts, for example. Specifically, we anticipate that communication/opinions are likely to be related to P45’s expansion and fortune, for better or for worse. The Sabian Symbol for this Mercury is “two men placed under arrest” — suggesting a time out, a captivating piece of information and/or a suspension of normal rules — as things are sorted out — as Sabian Sage Blain Bovee explains. Hmm. The Midheaven refers to heads of state and CEOs.

Mercury will enter another shadow period and turn retrograde during this lunar cycle, so delays would not be unexpected. After Mercury squares Jupiter, it will square Pluto and Saturn, suggesting 1) extremes in mindset and 2) focused or heavy thinking, including potential blocks.

Not being a psychic, I can’t see the specifics of how the time stamp of this New Moon will manifest in the news, but we’ll all know it when we see it. You are more personally affected by the New Moon’s seed-planting potential if you have a planet around 25 degrees of Virgo, Pisces, Gemini and Sagittarius, including those born around the 18th of September, December, March and June. Consult your local astrologer for details.

The Sabian Symbol for this New Moon is “a boy with a censer” — i.e., “a youth carrying a vessel that burns incense to purify the air, evoking an atmosphere readied for divine presence,” says Bovee. Hmm. Such a scent could be arresting, too — or maybe it just stinks. “Incense” also means to inflame, which reflects the potential of Mars in fiery Aries, continuing through this lunar cycle. Bovee offers these coping strategies.

File this under Sun-Mercury with Jupiter-Pluto (power, expansion, publishing):

I promised you that the Sun with Jupiter and Neptune would deliver big ocean news:

UPDATE: on Alexander Vindman, whose horoscope has at least two planets activated by Jupiter turning direct over the weekend. He’s breaking his silence and will be interviewed on NBC tonight. Another interview has just been published in The Atlantic. “Alexander Vindman: ‘Trump is Putin’s Useful Idiot'”

Supporting Vindman’s claims is journalist Sarah Kendzior, whose riveting book, Hiding in Plain Sight connected all the dots before most people knew there were dots to connect. Read it for yourself and you, too, may be motivated to volunteer for organizations that are sending out postcards to voters in swing states, encouraging them to register and vote.  Kendzior is a Virgo, driven by Moon in Leo or Virgo — we don’t have a birth time. The persuasive force of her Mars-Pluto conjunction in oh-so evident in her writing style, which is relentless, ruthless and impressive. This conjunction — like patterns in Vindman’s horoscope — is being activated by Jupiter turning direct and by retrograde Mars. This suggests expansion and provocation, for better or worse. If this is the first time you’ve heard of her, you’re hearing about her now courtesy of what’s going on in her horoscope! Astrology is amazing.

What going on in your horoscope? Are you up for a period of expansion and/or provocation? Here’s the 411 on personal consultations. If you’re not in need of a consultation, but find these weekly forecasts insightful and entertaining, Avid Reader Diane invites you to support the work with Moon in Leo appreciation, facilitated by the Cosmic Tip Jar.

Thank you for reading this forecast. Remember that all of the world’s problems have been resolved. We just haven’t gotten to that moment in time. But we will. 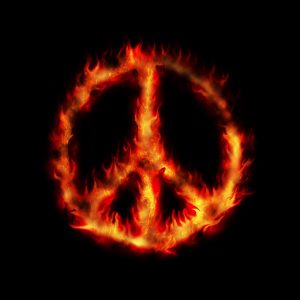