That’s the upside potential of this week’s exact planetary patterns. Jupiter — symbol of expansion, abundance and optimism — will trine (harmonize) with the regal Leo Sun on Wednesday. The Sun refers to leaders and willpower, suggesting support for your inner CEO. On Thursday Jupiter will trine Venus, suggesting expansion and generosity in matters of women, money, art and social expression. Ask and ye may receive.

As you know, Jupiter has been in Sagittarius — the sign it rules — all year. It is pulling extra focus this week as it slows to a standstill (from our perpective on Earth) and turns direct on Sunday morning. Watch for an abundance of news involving Jupiter-in-Sagittarius themes: travel, free speech, press, court opinions, foreigners, mass communication, sports, horses — to name a few.  If you have a planet or angle around 14 degrees of just about any sign, but especially Sagittarius, Pisces, Virgo and Gemini, you’re feeling the expansive rush more than most.

Meanwhile, rebel Uranus is also slowing down. It changes direction on Sunday — but it’s turning retrograde, not direct. We’re see this focus in the news via stories including but not limited to: revolutions/innovations in general and in matters related to money/banking, agriculture/food, seismic activity, possessions, beauty — and maybe even astrology. If you have a planet around 6 degrees of Taurus, Leo, Scorpio and Aquarius, you’re feeling the disruptive buzz more than most.

One horoscope that comes to mind immediately is “Moscow Mitch” McConnell, who has two — and possibly three —  affected planets. We know his Venus and Pluto are affected, and these two planets reflect his potential for stubborn emotional extremes. We don’t have a birth time for Moscow Mitch, but if he was born around 3 or 4 PM ET on Feb 20, 1942 in Sheffield, AL, his Moon would be at 6 Taurus. A Taurus Moon needs to preserve comfort and material security, however it feels Things. Ought. To. Be. Now his Moon is likely feeling the effects of transiting Uranus sitting right on top of it, shattering his personal status quo. The fact that “all of a sudden” everyone is calling him #MoscowMitch (much to his displeasure) and that he fell and broke his shoulder over the weekend are apt reflections. His broken bone also reflects transiting Mars (energetic outburst) square his Mars-Saturn-Uranus conjunction in Taurus, which were exact over the weekend.  Uranus refers to accidents; Saturn refers to bones; transiting Mars is the energy of action triggering a potential fall.

Back in 2014 and 2015, the horoscope of the U.S. was under exceptional stress, as any horoscope with planets around 13 and 14 degrees of Aries, Libra, Cancer and Capricorn would have been. For the U.S., the most stressful aspect was transiting Uranus and Pluto square the U.S. Saturn. Disruptions in matters of structure and authority are suggested by Uranus on Saturn. Pluto on Saturn, as Avid Readers will recall, suggests potential anguish in the face of considerable loss. Two issues that were dominating the news: the events in Ferguson (and why they happened),  and the realization that military surplus equipment had been given to local police    (this links to an astrological analysis from 2015). Now that Uranus and Pluto are off of the U.S. Saturn, we now have transiting Saturn squaring the U.S. Saturn, demanding a sobering reality check and/or advance on the matters raised back in 2014 and 2015. So that’s one way to look at the U.S.’s 249th and 250th mass shooting in 219 days. We are due for serious advances and sobering realities, for better or for worse. Videogames are not the culprit, and we know this because videogames exist in other countries, and they do not have mass shootings.  We also know from the U.S. horoscope that this country has a romanticized relationship with guns, soldiers and cowboys. Ray of hope: the Murdoch-owned New York Post put a call for a ban on assault weapons on today’s front page.Yup, it’s time to get real.

I have a whole slew of headlines reflecting the potential of Friday’s square between Venus (women, who and how we love, art and money) and Uranus. Translation: unconventional attractions; free-spirited women; disruptions in matters of money:

Finally, this WaPo op-ed offers a wild take on what scientists really know about gravity. Turns out it’s not much. I love this op-ed because lately I’ve been using the concept of gravity to help people understand how astrology works. “Astrology is like gravity. You don’t have to know it’s there for it to have an effect.” And now scientists seem to be admitting that they really don’t know what gravity is. I can relate. I can’t tell you what astrology is — or why it works. But I can tell you how and when it works — and more specifically, how and when it works in ways that are meaningful in your own personal world.

Thank you for reading this forecast. Pepper says hi. 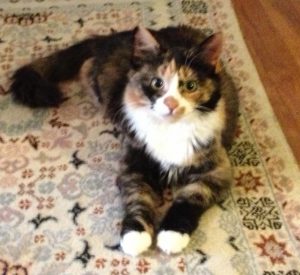