And it’s off to the races we go!

The work week begins with the Moon in love-love-me do Leo, driving the day with all-new energy to shine, shine, shine. If you’re feeling frustrated because no one is singing your praises, you may be feeling the potential downside of this morning’s face-off between Saturn (limitation, control, authority) and Venus (social expression, money, women, aesthetics), exact at 10:53 AM ET.  That’s especially true for you if you have a planet or angle around 20-21 degrees of Sagittarius, Pisces, Gemini and Virgo.

Public figures affected include, but are not limited to P45 (Gemini Sun, Sag Moon), P45 Jr (Mercury in Sagittarius), President Obama (Virgo Mars), Hillary Clinton (Pisces Moon), Mitt Romney (Pisces Sun), the United States (Mars and Neptune), James Comey (Sun, Pluto), Mike Pence (Gemini Mercury), Stephen Bannon (Gemini Jupiter).  Upside potential: out of a sense of lack of loss, formulate a plan for advance.  Or get out of your funk and take a moment to pay a compliment to someone else. In other words, become that which you wish to attract.

Add  the innovative spin on thoughts and communication suggested by today’s exact harmony between Mercury (thoughts, communication) and Uranus (innovation, rebellion) at 12:32PM ET, and we have an apt backdrop for the initiative launched today by the Democratic Party. It was announced in op-eds in the NYT and WaPo, touted as “A Better Deal.” What’s in it for you? Chuck Schumer explains.  Let’s add the willful action potential of WEDNESDAY’s meet-up between Mars and the Sun in regal Leo (at 8:57 PM ET) to the Dem’s deal-making potential.

Also of note this week: Mercury — planet of commerce, mindset, travel, gizmos and communication — leaves Leo for Virgo on TUESDAY at 7:41 PM ET. Wanna buy a computer? Run a brilliant analysis? Mercury in Virgo is happy to be of service — and fortunately performs with high efficiency in one of the signs it rules (the other sign is Gemini). However, do be advised that Mercury will turn RETROGRADE on August 12th. BACK UP YOUR COMPUTERS AND GIZMOS BEFORE AUGUST 12TH!!!

Mercury will turn direct on September 5th. Will offer more details as we get closer to the 12th, but meanwhile, if you’d like to have a few Really Useful Mercury Retrograde Survival Guide Bookmarks, drop $5.99 into my Cosmic Tip Jar and I will happily send you three. Your friends will love the other two!

Tough stories about tough women — suggested by streamlining Saturn opposing Venus — include this homepage item about President Michelle Batchelet of Chile. She’s the only woman head of state in the Americas, and in a few months, she’ll be gone.  Score one for the patriarchy (Saturn). Also streamlined (and directly affected by the Saturn-Venus opposition):  “The IMF cuts its U.S. growth forecast, citing Trump’s unfulfilled promises.”   Also facing possible cuts: Russia, whose horoscope is directly affected by transiting Saturn. Tomorrow, Congress will  vote on proposed new sanctions.

This one is also tough, but reflects planetary patterns, including Neptune (film, drugs, alcohol) running wild; Sun meeting with Mars in Leo (willful and dramatic action — to the downside); innovative technology (Mercury trine Uranus), with harsh consequences involving women (Venus opposing Saturn): “‘Man, we about to die’: Teen driver arrested after live-streaming crash that killed her sister.    She might also be nominated for a Darwin Award. In other news, innovative technology gets a reality check: while Mark Zuckerberg travels the world to “learn about people’s hopes and challenges,” a woman who works in the Facebook cafeteria suggests he look in his own backyard.

Nepturn refers to all things aquatic. Michael Phelps is an Olympic gold medal-winner swimmer — well nothing says gold like the Sun and Mars in Leo. Over the weekend he lost a race against a great white shark – sort of. It wasn’t a real shark (Neptune rules fraud). Viewers weren’t happy. Life can be a bitch (Saturn opposing Venus). Oh well.

Meanwhile, Jared Kushner has been dealt a reality check, as transiting Saturn meets up with his idealistic vision (Neptune). Today he testified behind closed doors to Congress about Russia, asserting that he “did not collude,” etc.. Meanwhile, The Guardian reports that his company sealed a real estatedeal  with a Russian-born oligarch “cited in a money-laundering case.”  Transiting Saturn will meet up with his Venus at the end of the year, suggesting another reality check or streamlining in store. Mr. Kushner is a Capricorn, born January 10, 1981 in NYC — no birth time known. He was quite the rock star last year and earlier this year, as transiting Uranus challenged his Sun. Next year, as transiting Pluto meets up with his Sun, prospects may be even more empowering — or — to the potential downside — simply transforming, as what no longer serves is exposed and taken away. With Pluto transits, resistance is futile.

What’s going on in your horoscope? Will Pluto soon be dancing on your Mars? How about your Moon? Where is your Moon, anyway? What does it all mean? Book a personal consultation and I will explain it all — in plain English, with no technical jargon. You will find it validating and enlightening.

Tomorrow I head back to the Big Apple. I’ve met so many wonderful people in NC — but oddly enough, none were actually born here; all are transplants from someplace else. That changed last night, when I met Charlie: 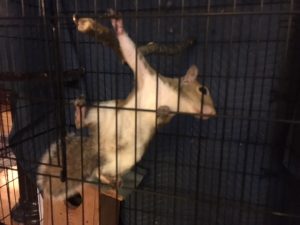