Did your Monday have a slow start, twist or flake? The Aquarius Moon went void Sunday at 3:07 PM ET, suggesting a longggg time to chill until 1:50 PM ET today.  The Aquarius Moon was the perfect reflection of a spontaneous gathering of neighbors in the lobby last night, complete with an impromptu bottle of chilled rose. Longtime Avid Readers may remember the 2018 Mars retrograde drama regarding the fate of several towering maple trees in our building’s interior courtyard. Residents rallied; the trees were saved, and our community is all the better for it.

The maples in the courtyard now stand proudly in a newly planted garden, their leafy branches defending us against the scorching sun. Our next step is to install a few benches in the garden so residents can sit and enjoy the birds and waterfall in the open air, as opposed to looking longingly at it through the lobby window. It takes a village and an eternity to get things done in a New York co-op, as anyone familiar with New York co-ops will know. But eventually, it will get done!

This week, the only pattern involving planets other than the Moon is an opposition between Mars in Leo and Saturn in Aquarius on Thursday morning, followed by a square between Mars and rebel Uranus on Saturday night. Themes we’ll see in the news involve militant discipline, dogged persistence, stubborn endurance, assertive breakthroughs…not to mention cars, warriors, masculinity, athletes and technology, to name a few. Examples so far:

You are more personally affected by this Mars-Saturn-Uranus configuration if you have planets around 12 degrees of Taurus, Leo, Scorpio or Aquarius. You may be feeling more combative, provoked and/or frustrated than usual, so choose your battles wisely.

And now, the news (many of these picked up from the Guardian’s home page):

In the spirit of Mars being so hot in the cosmos, clearly it is time for me to walk a few miles to the local pitch and putt. Better to tee off than be tee’d off, right? We get to decide! Onward!

Thank you for reading this forecast. And thanks especially to Avid Readers Marjorie,  Stephen and Barbara, whose Joyful Random Expressions of Appreciation made my weekend extra sweet. 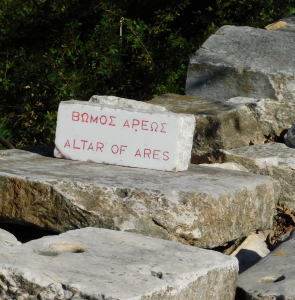 Altar of Ares in the ancient agora in Athens.

Sponsored by the letter “A”