I’m back in  New York after a fantabulous, non-stop three days of joy, reconnecting with cherished classmates  at my dear old alma mater, Wellesley College — RAH! Getting back up to speed on news I’ve happily ignored for the past week. It’s good to step away from one’s usual routine on occasion, creating space for a fresh perspective, recharging and renewal…

We are in the balsamic phase of the Moon, which has nothing to do with vinaigrette and everything to do with wrapping up an old cycle and preparing for the new. The Moon is in Taurus, driving the day with an energy seeking to establish form, preserve the status quo and perhaps indulge in the pleasures of the senses.  The Moon will be new on WEDNESDAY at 3:43 PM ET. Meanwhile, during this wrapping-up phase, we may feel listless or restless, sensing that the new cycle is just around the corner, but not sure what it will bring. With little light being reflected from the Sun, this dark side of the Moon is apt for meetings held in secret…and other things one might not wish to attract attention.

Despite a wish to fly under the radar, matters of thought and communication are likely to be prominent in the headlines. Why? Because Mercury, which refers to the way we need to think and communicate is about to leave Gemini for Cancer, meaning it will be at the Aries Point, suggesting PROMINENCE.  The Aries Point is explained here.  If you have a planet or angle  close to 0 degrees of Aries, Cancer, Libra or Capricorn, chances are you may be engaged in significant communication and negotiation over the next couple of days. Consult your local astrologer for details.

Here’s are the significant planetary patterns of the week:

In the sneak peek for last week,  I promised headlines of emotional overkill and bewilderment, brought to you by the intense Venus-Pluto opposition, combined with a potential “fried brain” of the Sun and Mercury hook-up, in a tense pattern with Neptune (drugs, spirits, toxins, vision, delusion, deception, victims). Right now matters related to Neptune are pulling focus, as Neptune is slowing down, about to turn retrograde on June 18th. Neptune is halfway through its 14 year journey through Pisces. When a planet crosses a halfway point, this is when we see the potential of its passage begin to matter. Pisces refers to drugs, faith, victims, oceans, martyrs, despair, empathy, refugees, compassion and self-undoing, including suicide.  Now do you understand why these themes have been pulling so much focus in the news?

I have a consultation I need to prepare for, so I can’t get to the headlines right now.  I promise you I will update this post by dinnertime ET with insights on many of the stories you’ve been asking me about, including Kate Spade, Anthony Bourdain, the G-7 and North Korean summits, plus stories you may not have heard about that are actually uplifting, inspiring and reflecting the upside potential of planetary patterns. (UPDATE: despite best of intentions, could not return to my writing desk today. Apologies and please stay tuned).

Meanwhile, I am back in the office and would be pleased to schedule a consultation to discuss what’s going on in your horoscope and how you can use awareness of planetary patterns to live life better. If you have children, I encourage you to also consider gaining an awareness of their horoscopes, too.

I leave you with an image from my Wellesley reunion weekend. Words can’t express how delighted I was to see this graffiti on a door in our dorm. The future looks bright! 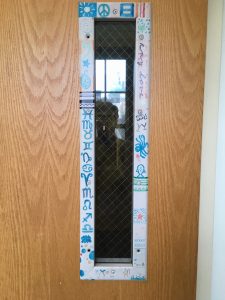