The week began with the Moon in Scorpio, on a mission to consolidate knowledge for the sake of being in control. If your Monday morning felt a bit like treading water, credit the fact that the Moon didn’t connect with any other planet in the cosmic sandbox until 6:14 PM ET (15 minutes ago, as I’m typing), when it opposed rebel Uranus. Has a jolt or other disruption of the status quo captured your attention? Is that why I’m finally giving form to the words in my head now? Whatever cattleprod you observed or experienced, the Scorpio Moon is serious about it, as demonstrated by its next stop: a square to Saturn — now officially retrograde –at 8:34 PM ET.

Highlights of this week are as follows:

Conclusion: there’s a whole lotta pixie dust scattered around this week. How apt that Tarot Diva Beth Owls Daughter’s Card of the Week is The Fool.  And yet, The Fool has no small amount of courage, and I thought about that part of The Fool when I read Heather Cox Richardson’s tribute to Frederick Douglass earlier today. It ended with this sage advice:

When the day comes that you have to choose between what is just good enough and what is right… find the courage to step on the train.

You’ll have to read the whole tribute to fully appreciate what that means.

Eclipses interrupt the regular flow of light and whatever other energy flows from the Sun or the Moon, like a river meeting a dam. This creates a bottleneck of energy that must eventually find a release, usually over the course of a few months’ time. In the case of this eclipse, the time frame is about five months.

Eclipses often highlight an area of life where something needs to be brought to a close. Wherever the eclipse falls in your horoscope is where you may experience a bottleneck of energy, followed by a release. Since this is a lunar eclipse, the release is likely to be highly emotional.  That can be a very good thing, as when things are released, they leave space for something new. It can also be experienced as quite an ordeal if the karma cops are behind what is being shut down.

Here is what the Full Moon/Total Lunar Eclipse looks like, set in Washington, D.C.: 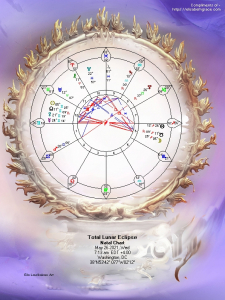 For further insight on the potential significance of this Full Moon/Eclipse, we turn to Sabian Symbol Guru Blaine Bovee. His take on these cryptic Symbols is so appreciated. For the Sun at  6 Gemini: “drilling for oil”; for the Moon at 6 Sagittarius: “a game of cricket.”

And yes, by popular demand, I am happy to offer thoughts on what this eclipse suggests for you. Toss $46 into my Cosmic Tip Jar as a Joyful Random Expression, and email me your birth data if I don’t already have it. I will send you a few paragraphs of personal insights.

After Wednesday’s early morning Super Flower Blood Moon eclipse (here’s how to watch it), the Sag Moon continues to drive the day with enthusiasm. Go for a gambol or a gamble; get out in nature; do something sporty; engage in a righteous debate; go see a foreign film. By late afternoon, you could have a productive conversation about some of your Full Moon revelations, assisted by the consolidating structure of Moon sextile Saturn, exact at 8:01 PM ET.

Planetary patterns reflected in the headlines include:

It was chilling to read about the Ryanair commercial jet that was hijacked at the personal behest of “Europe’s Last Dictator,” Alexander Lukashenkoof Belarus. It was an apt reflection of Saturn stationing retrograde in Aquarius, i.e. authority exerting control in flight, in an effort to crush 26-year-old Roman Protasevich, a journalist who “operated a communications channel to provide information about the democratic movement during the demonstrations,” reports Heather Cox Richardson. It also reflects the new paradigm of the Jupiter-Saturn conjunction: that the one who controls the flow of information may control the world. It doesn’t matter how much stuff you own. The hijacking succeeded in part because of a Mercury-Neptune lie, i.e, the fake bomb threat that was the “excuse” for landing the plane in Belarus instead of Lithuania, its intended destination. Not to mention an actual military threat (in the form of a fighter jet).

Avid Readers may recall reading about Belarus in this forecast back in August when dictator Lukashenko claimed to have won a rigged (obviously) election with 80% of the vote. Yes, and that’s why tens of thousands of people in Belarus took to the streets, and thousands were arrested. Astrologically, Mars was around 20 Aries, square Jupiter-Pluto in Capricorn, and triggering the January 10, 2020 eclipse. In Lukashenko’s horoscope, we note Jupiter-Uranus in Cancer, square Venus-Neptune in Libra — activated by transiting Mars in August, and activated again now, as transiting Mars approaches 20 Cancer! We see how he would take action now. If his birth data is correct, multiple planets in his horoscope were eclipsed in December 2019 and January 2020. His 6 Virgo Sun will be affected by Wednesday’s lunar eclipse, and his 26 Aquarius MC – Pluto opposition will be eclipsed in November. Perhaps the continued pressure will effect a change in his regime at the end of this year or next year.

Meanwhile, in Floriduh (not to be confused with Florida, which is another state of being), Governor Ron DeSantis signed a bill that blocks social media platforms from banning “political candidates.”  — because in the Jupiter-Saturn in Aquarius Age, whoever controls the information flow will have the power. So will we have a congressional investigation into the January 6th attempted coup at the Capitol? Not if Mitch McConnell and Kevin McCarthy get their way.

There is so much more I would love to talk about, but this forecast needs to ship!

Random Venus trine streamlining Saturn at a standstill headline: birth rates around the world are plummeting;  the Supreme Court has agreed to hear a case on Roe v. Wade, which is not good news if you’re female and live in a red state.

Upside reflection of the above two patterns, laced with the publishing potential of Sun square Jupiter: have you heard of the Linda Lindas? It’s a punk band of four girls in Los Angeles. (Punk is something I understand. Gabba gabba hey!) The drummer is 10; the oldest guitar player is 16. They’re Asian and Latinx. A video of a concert they did at the Los Angeles Public Library (publishing!) went viral last week; they just got a record deal. Their new hit single: “Racist Sexist Boy.”

Thank you for reading this forecast. Here’s the 411 on personal consultations. Here’s how to support this public service with random or monthly expressions of appreciation. It really does make my day when Avid Readers make sure I know they find my insights worthwhile. 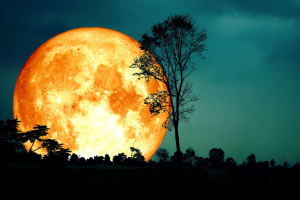