Good Morning! Or perhaps afternoon, by the time this is posted. It takes a few hours to gather these stories and make sense of them through the lens of astrology, especially since I do not write every day. Yet the astonishing synchronicity of planetary patterns and headline news continues to enthrall, so gather and analyze I shall. Gratitude to Avid Readers for your continued support — fan email,  shares, contributions to the Cosmic Tip Jar and of course, requests for personal consultations. As of next month, I will have been writing this forecast for nine years. Here’s to another nine more!

The Capricorn Moon goes void today on its weekly clash with rebel Uranus at 11:36 AM ET suggesting an upset to the status quo. Roll with whatever twists, flakes and/or crises may disrupt your efforts to move forward in a straight line. Stick to routine matters and chill until the Moon enters Aquarius at 6:44 PM ET. Other Moon voids this week are THURSDAY 3:32 AM ET until 6:12 AM ET, and SATURDAY at 9:12 AM ET until 2:57 PM ET. On Saturday we will have the next New Moon — in Pisces — at 9:12 AM ET.

Meanwhile, we’ve got a boatload of action to talk about.  On TUESDAY at 8:39 AM ET, Venus in warrior Aries is squared by patriarchal Saturn. Venus refers to social expression, money, women and aesthetics; Saturn refers to control, structure and discipline. Hardheartedness  would be one potential, as in streamlining in all matters related to Venus. Downside: budget cuts and other financial controls, with empathy tossed out the window. Upside: women of steel making themselves known.  We had a whole month of Saturn square Venus last April. Here’s what was going on then.   If you were born around the 29th of March, June, September and December or have a planet around 8 degrees of Aries, Cancer, Capricorn or Libra, you are likely feeling a squeeze — for better or for worse. This is not always “bad;” often Saturn reflects just the discipline we need to move a plan forward!

Also exact on TUESDAY (but reflected in the headlines a few days before): a harmony between the Pisces Sun and Jupiter in Scorpio. This suggests expansion — for better or for worse —  if you have a planet around 23 degrees of Scorpio, Pisces or Cancer. It’s the silver lining after the squeeze of Saturn. I see this reflected in Beth Owls Daughter’s Tarot card for this week — the Five of Cups — check it out.

As we get closer to the weekend, we are likely to see stories of action, aggression and courage pushing boundaries with prominence. Why? Because Mars (action, courage, aggression) is at the end of Sagittarius, which means it will hit the prominent Aries Point when it enters Capricorn on SATURDAY at 12:41 PM ET. You are affected by this more personally if you have a planet or angle around 0 degrees of Aries, Cancer, Libra or Capricorn. Count to 10 before you lash out and be mindful of your surroundings.  If you’re running a marathon or need a boost of energy to apply to a constructive task, a hit from Mars may serve you well. Familiar newsmakers  off the top of my head whose horoscopes are affected include Hope Hicks, Paul Ryan, Jeff Sessions, Rafael “Ted” Cruz, William Shatner,  Orrin Hatch,  Barack Obama, Harvey Weinstein, Meryl Streep, Elizabeth Warren,  Michael Moore, Gary Oldman, Bill Murray, Steve Mnuchin, Louise Linton.  Watch the headlines between this weekend and next.

How many times in November and December did we say that the rush to pass a tax reform bill with Mercury retrograde in sloppy Sagittarius  (not mention the muddle-headed influence of transiting Neptune) would result in a mess? Too many to mention, but here’s one for reference.  Meanwhile, from the Sunday front page of  the NYT: “GOP Rushed to Pass Tax Overhaul. Now It May Need to Be Altered.” Ya THINK?!?

Remember that Sunday’s aspects included a hard-headed square between Mercury and Saturn; an innovative/risky harmony between Mars and Uranus; and a potent harmony between the Sun and Pluto (power and resources; news from underground). “In Britain, Learning to Accept Risk, and the Occasional ‘Owie'” is about a new initiative to expose school children to “the element of risk in everyday environment” out of fears that the children are too soft. Another front-page story: “Targeting Rules ‘Written in Human Blood'”  is about the innovative ways the oil industry is lobbying to change (Pluto) the restrictions (Mercury-Saturn) on drilling (Pluto) imposed during the Obama years.

The front page of the NYT Sunday Styles section includes two Mercury square Saturn mind control experiments (Mars-Uranus). The Man Who Knew Too Little. is  about a man under a self-imposed news blackout since the November 2016 election. He has no idea what’s going on in the world, and he’s quite happy. He also has the resources to be completely self-sufficient, unlike the rest of us. The second story is about the newly-rigorous disciplined life in an Arizona “rehab” for...Harvey Weinstein.

Need an innovative control on your phone conversation? Time for a revamped perspective.  In the NYT Business section: “Dial ‘P’ for Privacy: the Phonebooth is Back”.  Meanwhile, on the Sunday Review front page, we see a screaming Venus-Saturn square:  Money is Power. And Women Need More of Both.

Mercury refers to the lungs. Saturn refers to teeth.  This was apt and odd from WaPo:  “Dentists Keep Dying From This Deadly Lung Disease. The CDC Can’t Figure Out Why.”

I wanted to share this last week, when Jupiter turned retrograde and Venus was at the Aries Point: “15 Remarkable Women We Overlooked in Our Obituaries.” Better late than never, odd pun intended.

It is fascinating to see  one of the stories that was hot under last April’s Saturn-Venus square back for an update at this time. Remember Robert Berinstain, the undocumented Mexican immigrant — married with children to a U.S. citizen (who voted for P45)? He was the  beloved owner of a restaurant in Granger, Indiana — suddenly deported. Outrage ensued. Where is he now? What happened to his successful restaurant? Where are his wife and children? Meanwhile, a policy of separating children from their immigrant/refugee parents has only gotten harsher, as this Sunday’s WaPo editorial laments (on a Saturn-Venus square, naturally).

OK, time for some fun stuff — before these heavy Saturn transits (some of which are impacting your faithful astrologer’s horoscope) take over the world. Although I must say, even the sketches on SNL had the sobering stamp of Saturn. Did you catch the cold open spoof of  last week’s trainwreck finale of The Bachelor, where Robert Mueller (played by Kate McKinnon) confesses to Becca Kufrin (played by Cecily Strong) that he just doesn’t have the goods?

Meanwhile, Uranus and Mercury refer to astrology. With those planets pulling focus over the weekend, combined with the transforming potential for a Sun-Pluto harmony, it was empowering and refreshing to see a positive, thoughtful take on why Millennials are so into astrology. Thanks to The Guardian!

UPDATE: on Michelle Obama, whose horoscope was discussed back in 2016.  On the last of three hits to her 26 Capricorn Sun (suggesting a need for freedom of self-expression), a truly unique portrait was unveiled in the National Portrait Gallery and her memoir will be published this fall. Not only that, but a photo of a two-year-old girl staring in awe at the painting went viral, which led to an adorable video of Mrs. Obama dancing with the little girl.

Writing about P45 can be exhausting. Are you exhausted by the continuing astrological updates? Let me know — and I  will consider your opinion when choosing what to write about in future forecasts. I kept it to a bare minimum today, though the continued chaos in DC is happening as we would anticipate, given his horoscope, the horoscope of the US and the horoscope of his inauguration. I’d also like to know if you enjoyed this forecast more when I wrote it every day.

Until next time, here’s to the positive potential of Venus under the influence of Saturn. Cue Cat Stevens now, please… 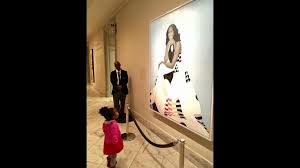