Allll- righty then! Late post today — I’ve been on the road. Happy to be back in New York!

How did you manage this day with Moon in Capricorn and its need for enterprising action? How did you make it work?

Did you note the potential for intensified emotions, resulting in a power play or catharsis around 2:21 PM ET? That’s when the Moon made its weekly clash with Pluto. A upset to the status quo is suggested as we approach 1:46 AM ET on TUESDAY, when the Moon is challenged by rebel Uranus. It promptly goes void until 10:11 AM ET. There’s your excuse for sleeping in on Tuesday morning — or for whatever twist or flake disrupts your efforts to move forward in a straight line.

Meanwhile, the expansive energies of Jupiter continue to influence the week. In the wake of Jupiter’s square to the Sun on Saturday, it moves on to challenge Mercury at 5:39 PM ET on Tuesday night. Big ideas, big talk, big gobs of information, especially if you have a planet or a significant point around 22 degrees of Scorpio, Aquarius, Taurus or Leo. Add in a harmony between the Aquarius Sun and rebel Uranus in Leo, and said big ideas hitting the headlines are likely to involve aviation, gender-benders and technology.

But wait — there’s more! We are in last few days of the lunar cycle. The New Moon in Aquarius happens on THURSDAY at 4:05 PM ET — and it’s also an eclipse. Briefly, this eclipse at 27 Aquarius falls almost exactly opposite the so-called Great American Eclipse that happened on Aug 21st at 28 Leo. So if your horoscope was impacted by the August eclipse, it’s impacted by this one, too. Will write more about this Thursday’s event as that day approaches. Until then, bear in mind that in this “dead Moon” period, it is not unusual to feel listless or restless, sensing that something new is just around the corner, but we don’t know what.

Some of what comes out by the weekend may have a particular spectacular or scandalous spin, brought to you by Mars (action!) needing to pushing boundaries in Sagittarius…but squared by nebulous Neptune in Pisces. Neptune keywords include viruses, flu, oil, water and spirits of all kinds. That potentially wiggy aspect happens on SATURDAY at 6:21 AM ET. Here are a few headlines from a prior Mars-Neptune square.

Enjoy these last days of Mercury and Sun in Aquarius. Both move into Pisces on SATURDAY and SUNDAY, respectively.

The news will be back in the next forecast. Stay tuned…or tune in to “Cosmic Tuesdays” tonight at 9:30 PM ET. Anthony S. Picco is the gracious host, and I am his honored guest. Here is the 411: 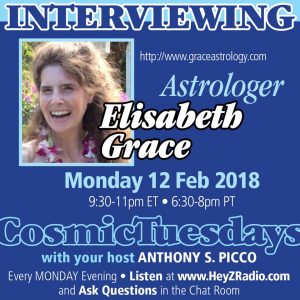