Note your dreams this AM, as the info-junkie Gemini Moon is challenged by visionary Neptune at 9:09 AM ET. Neptune aspects can be fuzzy, and combined with Mercury’s move forward Sunday in sloppy (but righteous) Sagittarius, you may need to take it slow. A day with Moon in Gemini suggests a need to be the smartest kid in the room; to chat up a storm; to seek out the facts — but still…

Not that the electrifying and rebellious buzz generated by Uranus making a hard contact with the Sun on TUESDAY at 11:21 AM ET is inclined to be patient. Combine that with the rising emotions reflecting the Moon waxing to its fullness (on THURSDAY). Add the yuge potential for expansive and empowered action suggested by WEDNESDAY’s challenge between the Sun and bigly Jupiter, along with a harmony between Mars (action) and Pluto (power). Color it prominently rose, suggested by a meet-up between Venus and Neptune on THURSDAY, along with Mercury — now direct — at the Aries Point.

Bottom line: the rush to act rebelliously is supported; however, chances are good that the action plan needs a re-think. We’ll see if it gets one.

The Gemini Moon goes void on TUESDAY between 4:38 PM ET and 5:49 PM ET — you might not even notice. On THURSDAY, however, the Cancer Full Moon goes void at 6:34 AM ET…not to enter Leo — the next sign — until 7:08 PM ET. That’s a heads up to focus on routine concerns and not make a mountain out of a molehill. And no impulse shopping, if you please. Roll with whatever twists and flakes may crop up in your efforts to move forward in a straight line. If you oversleep, don’t worry — you probably did not miss anything of consequence. Chill!

That’s the overview of planetary pattern for this week.

On a day with Mercury turning direct in Sagittarius — a sign not known for its attention to detail — we could expect a few glitches in print. Even a newspaper like  The Guardian — usually a reliable source — can screw up. “Barack Obama says Donald Trump may have ‘enough craziness’ to be president,” is the headline that’s been on its home page all day — and that’s not what President Obama said at all. Which you’d find out if you read the first paragraph of the article:

Barack Obama thinks Donald Trump is “very engaging and gregarious” and “not lacking in confidence”, to the point where he may have “enough craziness to think [he] can do the job”.

Meanwhile, a newspaper in Germany has taken pains to dispute an utterly false story reported by Breitbart. No, hundreds of Muslims did not set fire to an historic church on New Year’s Eve.  And if these fake news stories tick you off, the NYT offers this empowering piece: “How to Destroy the Business Model of Breitbart and Fake News.”  More effective than signing your name to a petition — go for it!

Last Monday, the top story was the secret vote taken by members of the Republican Congress to hobble the Office of Congressional Ethics. Ordinary voters  were given credit for helping to save it by flooding the offices of Congressional members with phone calls — depending on where you get your news. Over the weekend, ethics was again a hot topic. Why? Because there are at least nine Senate confirmation hearings scheduled to begin this week — for incoming Cabinet nominees who have not yet been cleared by the Office of  Government Ethics: “Ethics Office Warns Confirmations for Trump Nominees Are Moving Too Fast.”

Let the record show that House Majority Leader Mitch McConnell clearly outlined his expectations for how Cabinet nominees were to be vetted and confirmed — in a letter to Harry Reid dated February 12, 2009. This is one of two must-sees in today’s forecast. His response to Democrats demanding the same standards now: “Grow up.”   If you’d like to contact Senator McConnell and remind him of the courageous letter he wrote back in 2009, here’s how to contact him. You’ll also find contact info for all members of the Senate. Phone calls are more effective than emails.

UPDATE: Meryl Streep, whose horoscope I ve been following for several years. She and Elizabeth Warren are astrotwins — born on the same day and year — at the beginning of Cancer, suggesting an essential being focused on caring and emotional/home (land) security. Their Suns are conjoined with Uranus, a planet symbolizing rebellion and lightning bolt clarity. They are both born to be prominent — as fiercely humanitarian individualists, daring to buck the system. Their Moons are in Taurus, also seeking comfort and stability — but in a material form. They need to build something tangible out of all that caring energy. You can feel that, right? As if they are cut from the same cloth. They are!

Two years ago I wrote about Ms. Streep’s horoscope and noted the strong potential for significant recognition right about now, given that transiting Pluto is squaring her Midheaven.  Action to the Midheaven suggests action in matters  of reputation and professional status. Pluto suggests fame and empowerment, and it will hit Ms. Streep’s MC three times in 2017.

Last night, with transiting Mercury (communication) at the Aries Point, thus making contact with her Sun and Uranus conjunction, Ms. Streep was awarded the Cecil B. DeMille Lifetime Achievement Award at the Golden Globes. Her acceptance speech is the other must-see item in this forecast. It lit up social media and brought many listening to tears.

Astrology is amazing. Want to know when you’re likely to win an award — and/or otherwise rock the world? Consult your local astrologer. Here’s the 411 on consultations. Together we will plan a strategy for this New Year. 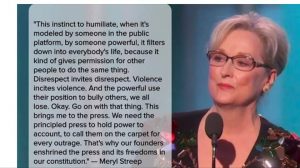