It’s Monday…and the Moon has been void in Aquarius all day. Are you rolling with the twists and flakes? Chilling over perceived crises? Taking time to take care of routine concerns? Excellent!

Here’s an apt headline for an all-day Moon void: “Second Amendment Case May Fizzle Out at the Supreme Court.”

At 1:20 PM ET Jupiter left Sagittarius for Capricorn — as covered in yesterday’s forecast. The rest of the week goes like this:

Thanks to the many who have checked out my new website — https://elisabethgrace.com.  There’s a new EVENTS page where you’ll find upcoming talks, including one in New York next week…and a killer four-day astrology conference at the end of March. We have ten spots left in what will be a peerless educational experience for anyone serious about learning the language of astrology.

Last, but not least, the Cosmic Tip Jar now has its own page — much easier to find for those who are ordering reports, paying for Quick Questions and performing random acts of generous support, which are always cherished and never, ever taken for granted. 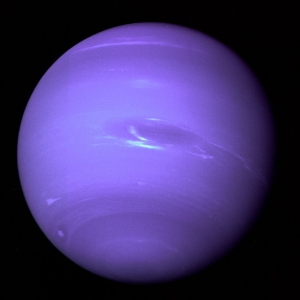 This picture of Neptune was produced from the last whole planet images taken through the green and orange filters on NASA’s Voyager 2 narrow angle camera.  The picture shows the Great Dark Spot and its companion bright smudge; on the west limb the fast moving bright feature called Scooter and the little dark spot are visible.  Don’t you just love that there’s a bright feature on Neptune called “Scooter”?