A Libra Moon drives the day with a need for fairness and balance. Its weekly clash  with Pluto at 12:57 PM, suggests an emotional catharsis or power play, energized by a harmony with action hero Mars at 9:43 PM ET.  Moon goes void at 3:02 AM ET on TUESDAY, which is Election Day in the U.S. Its last aspect is a meet up with Venus (women, money, social expression).

Here’s the layout for Tuesday:

Planetary patterns for the rest of the week:

“Vote your values.” That’s a quote from Oprah Winfrey that made headlines over the weekend, as she went door-to-door in Georgia, campaigning for Democratic gubernatorial candidate Stacey Abrams. But if you Google “vote your values” you’ll find a slew of organizations — blue and red — using that call to action. Reviewing values — how very Venus retrograde.

It’s a dead Moon. The Sun is trine Neptune. I can’t bear to write another word about a political campaign. I am holding my breath and cautiously optimistic. Tomorrow I’ll be at the polls at 5 AM, serving as a pollworker. It’s something I have within my power to do: help others exercise their right to have a say in how things get done.

Neptune refers to music and idealism. It’s quite prominent in the horoscope of Barbra Streisand, squaring Mars at the Aries Point. That’s one suggestion of enigmatic charisma. It’s a key component in her professional status, as it trines Uranus and Saturn, ruler of her Capricorn Midheaven (career point). Saturn with Uranus suggests a need to reinvent the wheel, blending the best of the old guard with the avant garde.  With Saturn at the top of her horoscope and squaring her me-me-me pioneering Aries Ascendant all this year, it’s no surprise to see her back in the public eye, and at the top of her game.

Ms. Streisand is a Taurus with the Sun conjunct Mercury, both of which square the Moon and Pluto in drama queen Leo. Idealism and more star power potential! Those four planets were activated by this summer’s Mars retrograde, Venus retrograde and the July 26th eclipse. Humming in the background is the breakout potential of transiting Uranus on her Sun and Pluto — exact in 2019. That would be an apt time to finish her memoirs, now four years in the writing.

Last week she was a guest on James Corden’s Car Pool Karaoke, belting out tunes and talking up her new album, Walls.  That’s the link to the segment, along with other stories from the Good News Network, which is all I’d like to read under current planetary patterns.

Hopefully there will be more good news in the next forecast. Whatever happens, there is sure to be good news in some part of your life. What’s penciled in to your cosmic calendar? I’d be delighted to give you the 411 in a personal consultation. Here’s how to contact me.

And now, a message from our sponsor: 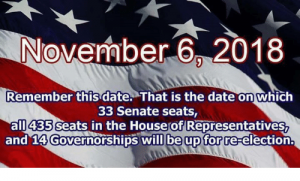 I actually got into a heated discussion last week with two usually informed adults who insisted that all 435 seats in the House were NOT up for re-election. Wrong! Here’s how to find your polling place and confirm that you are registered to vote.