It’s a holiday week in these United States, but if you are working anyway, there is much that can be accomplished — starting with this morning. Moon is in Scorpio, driving the day with a need to dig deep for knowledge – -all for the sake of power and control. That’s where it was yesterday, and headlines were flooded with stories of dirt dug up. It is a dead Moon — the end of the lunar cycle. This accounts for any restlessness or listlessness you may feel, sensing that there is something new around the corner, but you don’t know what. A dead Moon is apt for projects and meetings you hope will fly under the radar, hidden by the lack of light from the Moon. Today’s Scorpio Moon goes void at 12:30 PM ET — for the rest of the business day. Stick to routine projects during the void; roll with any twists or flakes that disrupt your efforts to move forward in a straight line. CHILL OUT if a crisis erupts; it will likely dissipate once the Moon enters the next sign — Sagittarius — at 3:11 AM on TUESDAY.

Meanwhile, Venus changes signs today, leaving boundary-pushing Sagittarius for hard-nosed Capricorn. “How can we make this work?” is a Capricorn concern — and Venus in Capricorn can be quite the social climber, strategically considering how to best use assets — including people — for status and accomplishment. Issues involving women, money, art and social expression are likely to be prominent today through Wednesday, as Venus will be at the Aries Point, which includes the very start of Capricorn.  Here’s the rest of the week:

The news will return in the next forecast. There’s so much to write about that happened last week as anticipated — Israel’s  Netanyahu was indicted; Benny Gantz — who ran against him in the last election — failed to form a government. No surprise to anyone who’s been following this forecast — or read my take on Israel’s horoscope in the last Mountain Astrologer. We were expecting another upset for Israel at this time.

Meanwhile, in the wake of the weekend’s two big patterns — the shockingly aggressive innovation of Mars opposing Uranus, coupled with BIG news of valuable objects (Jupiter and Venus at the Aries Point), wipe-out and scandal (Neptune at a standstill) during a dead Moon (favoring covert operations):

Elsewhere, billionaire Michael Bloomberg, representing the Saturn-Pluto conjunction in Capricorn Coalition has officially tossed his hat into the Democratic presidential campaign — here’s his horoscope — will update it soon, I hope. And — oh! — Fiona Hill testified before Congress last week — did you see her declare the truth, the whole truth and nothing but the truth?  She was born in October 1965 — no birthday known as of yet. She’s either a Libra having a sobering and authoritative experience with transiting Saturn, or a Scorpio being catalyzed by transiting Uranus. She might even be a double Scorpio, like Marie Yovanovitch. You can see why that speculation is plausible when you learn how she responded to a bullying classmate who set her pigtails on fire when she was just 11 years old. What do you think?

I would love to keep writing, but I must stop and focus my efforts on the new website that will be launched on Wednesday — at the appropriate astrological time. It’s been an tremendous effort over the past few weeks — I can’t wait for you to see it!

Until then, I leave you with Tarot Diva Beth Owlsdaughter’s Card of the Week — totally in synch with the mystic focus of Neptune turning direct…and Venus (women) demanding serious focus in Capricorn, at the prominent Aries Point.  Brava, Beth!

Thank you for reading this forecast. Have a wonderful Thanksgiving! 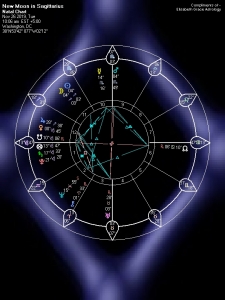