It’s Sunday night, and we’re in the middle of a long Moon void — this one in Pisces. Jupiter and Mercury are at virtual standstills, both preparing to turn direct tomorrow (Monday) at 1:30 AM ET and 11:16 AM ET, respectively. Planets at their stations (this is the technical term for a planet about to change direction) function like car horns blaring when leaning on by a driver. Matters they rule command attention and FOCUS. For Mercury, this is communication and information; for Jupiter, this is the law, education, sports, publishing, religion, travel, foreign affairs — and especially our collective belief systems.

Add to the mix three other patterns — all involving either Mars (action, aggression) or Pluto (power plays and catharses, news from underground — and all exact between today (Sunday) and Friday, and we really need to salute the NYT for today’s front-page story: “90 Seconds of Rage on the Capitol Steps.” It’s a meticulously researched FOCUS on a concentrated span of time, with plenty of investigative dirt and connections dug up. True to the spirit of Sunday’s Pisces Moon, the article ends on a note of tears and empathy. Astrology is amazing — and the NYT gets five stars for once again being in sync with planetary patterns.

Here is the chart for the Aries Full Moon, set in Washington, D.C.: 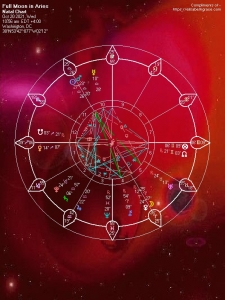 Back to the weekly forecast:

Fun fact: the 17th is my favorite day of each month because that’s the day I receive the most Cosmic Tips from Avid Readers, Fairy Godparents, Guardian Angels, and Biggest Fans who have pledged Faithful Monthly Expressions of Appreciation — so inspiring when typing the Sneak Peek at 1:23 in the morning! I wish I could remember what I wrote on that lucky 17th that inspired so much support, but please know I’m ever so grateful to those who were moved to place a value on my astrological insights.

There were plenty of stories reflecting last weekend’s triple conjunction of Mercury, Mars, and Sun in Libra — a sign in which the latter two are inclined to behave a bit badly — perhaps in an effort to accommodate the other side. Mars refers to men, cars, heat, and steel; the Sun refers to ego, leaders, and the heart:

File this under Pluto turning direct on October 6th (a nice follow-up to the release of the Pandora Papers, which has resulted in the Denver Art Museum returning certain artifacts to Cambodia, and the possible impeachment of the president of Chile):

Saturn turning direct last week suggested potential cuts and losses — and with respect to the $3.5 trillion infrastructure bill the Biden Administration would like Congress to pass, it’s now looking like funding for home health care, child care, the expanded child tax credit, and universal pre-K will be reduced or cut. Did you know that Sen. Joe Manchin of West Virginia publicly espoused a $4 trillion infrastructure bill on January 19, 2021? Why is he trying to cut it by 75% now? Over the weekend, Transportation Secretary Pete Buttigieg warned Manchin that his resistance to the clean energy proposals (as a remedy for inevitable climate change) in the bill will “cost lives.” This is an apt headline for a weekend dominated by Sun square Pluto (power plays and energy resources). Manchin’s horoscope (8/27/1947 in Farmington, WV) — even without a birth time — is on an expansive tear this year, as transiting Jupiter opposes his Sun, Mercury and Venus. His ego energies (Sun) are being amplified to the extreme by contact with Pluto, which my astrology software program compares to a butterfly emerging from a cocoon, allowing one’s true nature to be revealed.

It’s now Monday morning and Mercury has just turned direct, upping the odds that the media won’t get it quite right. As if on cue, we’re seeing stories that former Secretary of State Colin Powell has died of “complications of Covid,” (true) but neglecting to add that Powell had multiple myeloma, a blood cancer that compromises the immune system. There is no truth to the statement made by John Roberts at Fox “news” that Powell’s death raises questions about the efficacy of the Covid vaccine.

Avid Readers will recall that the horoscopes of the recently deceased often reflect current planetary patterns, and Powell’s is a fine example of this week’s “military power” square among Sun-Mars and Pluto. His Mercury is at 27 Aries — same as this week’s Full Moon — and it is squared by an opposition between Jupiter at 24 Capricorn and Pluto at 26 Cancer. This T-square pattern was under stress all through 2020 and continuing into 2021, mostly courtesy of transiting Pluto on his Jupiter. This week we can expect illumination on how he needed to think and communicate, reflecting the Full Moon right on his Mercury. Transiting Mars activates all three planets in this T-square into next, reflecting matters involving expansion, status, reward, power, and transformation. There will be a discussion of his performance at the United Nations on February 5, 2003, in which he presented “proof” that Saddam Hussein had weapons of mass destruction, in an effort to convince the world that invading Iraq was justified. I don’t about you, but I’ve never forgotten that UN speech, illustrated by an easel of placards depicting diagrams of WMD-loaded trucks that every fiber of my being screamed was 100% false. I remember feeling heartsick because I expected better of him — and because the speech accomplished its objective.

And before I forget…

In closing, I welcome any recommendations for alternatives to AT & T. During this Mercury retrograde, it was revealed that AT & T is a financial backer of One American Network News (OANN) — as you can see here.  Now that Mercury is moving forward, it’s time to change — and also upgrade my iPhone. Do any Avid Readers have T-Mobile, Mint, Credo or some other cell phone service provider that they just adore (if it’s possible to adore a cell phone service provider)? Inquiring minds want to know!

Meanwhile, here’s the 411 on personal consultations. 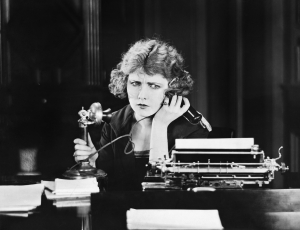