Never a dull moment, is it?

The work week began with the Moon in regal Leo, an apt placement for a bright spot in the daily newsfeed. And here I would be referring to the royal baby born yesterday to the Duke and Duchess of Cambridge. Today the Leo Moon goes void at 2:39 PM ET, not to enter Virgo until 4:40 PM ET. Chill for a couple of hours and refrain from making mountains out of molehills. Roll with whatever twists and flakes may disrupt your efforts to move forward in a straight line. Then use the Virgo Moon’s discerning needs to sort out and put in order whatever you have on your plate for the next few days.

What do all these patterns mean to you?  Check in with your local astrologer once or twice a year,  just as you would with your dentist. Our consultation is sure to be validating and empowering. Here’s how to contact me.

I neglected to mention the death of Barbara Bush. I should have, given last week’s heavy influence of Venus (women) in touch with Jupiter (grand, big, expansive) and Pluto (power).  Add to that the disruptive potential of the Aries Sun with rebel Uranus. Kudos to WaPo op-ed columnist Ruth Marcus for noticing the synchronicity in the headlines in  her column “What a week for women. Barbara Bush would have been proud.”   That op-ed included Senator Tammy Duckworth — the first Senator to give birth in office and bring her infant daughter to the Senate floor, breaking a Senate taboo.  I would add Madeleine Albright to this mix. Check out her new book: Fascism:  A Warning.

It is interesting to note that Mars is following in Venus’s footsteps this week, aligning with Jupiter and Pluto. Now we are seeing heavy Mars — anger, courage, guns– and of course, men — in the headlines. I could not help but note the regenerative potential of Pluto with Mars in this one: “Whole Again: A Vet Maimed by an I.E.D. Receives a Transplanted Penis.”  Meanwhile, Season 2 of “The Handmaid’s Tale” premieres tomorrow, right on that Mars-Pluto conjunction. On The Guardian’s home page, the most-viewed stories include:

Over at the NYT we find “How Windmills as Wide as Jumbo Jets Are Making Clean-Energy Mainstream.”

At WaPo, the most-viewed story is “NRA are blowing up Yeti Coolers.” In third place: “I thought I was done”: George H.W. Bush faced  death at 20 in WWII.”   Mr. Bush was hospitalized yesterday.

Here are a few stories reflecting the streamlined thought/info potential of this week’s heavy square between Mercury and Saturn:

Finally, here is the horoscope for Royal Baby #3. Sun in Taurus, driven by that regal love-love-me-do Leo Moon. This is a strong will with a dramatic and fiercely independent temperament. It’s fronted by a Cancer Ascendant, suggesting a need to be seen as someone who is caring and sensitive. It’s no surprise to see his Midheaven at the Aries Point, suggesting prominence in public status (!). There’s a strong need for an expression of physical stamina and potential excellence in athletics. For now, let’s leave him be to adjust to his new life on Planet Earth.

It’s fascinating, however,  to study the horoscopes of children. If you’re ever looking for the perfect baby shower, Mother’s Day or Father’s Day gift, a consultation about a child’s horoscope is priceless. 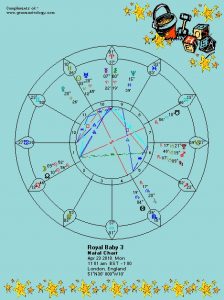