Here’s a reminder of the forecast for this long holiday weekend in these United States:

Really, if you’ve ever doubted that the astonishing synchronicity of planetary patterns and the news is a Very Real Thing, the headlines this week should convince you for all eternity. The driving factor was Mars in drama queen Leo, as it militantly opposed controlling Saturn on Thursday, followed by its rebellious and explosive square to Uranus, exact on Saturday night. Humming in the background is the dreamy or delusional square between Mercury and Neptune. Ready?  We anticipated men getting away with murder, militant controls, explosive action, accidents in aviation, and magical thinking. We were right to anticipate, as you can see:

Are you noticing a pattern here?

UPDATE: on the June 22 primary elections in NYC, in which I served as a poll worker, as you may recall. Who schedules an election on a day when the Moon is void for half the day and Mercury turns direct on a square to Neptune? “Confusion Is Winning the Race for Mayor: race thrown into chaos when test results were counted by mistake.”  Ya think?

UPDATE: on Allen Weisselberg, who was called out in this forecast on June 14 as Someone To Watch, as his Saturn-Pluto conjunction at 13 Leo is affected by the disruptive Saturn-Uranus conjunction, triggered this week by transiting Mars. “Prosecutors allege 15-year tax fraud scheme as former guy Organization and CFO Weisselberg arraigned on multiple criminal charges.”  Remember that the next significant hit for the former guy’s horoscope is July 10th, and it is likely to affect finances, documents, family, real estate, professional status, and reputation.

The Supreme Court handed down provocative (Mars) decisions that favored authoritarian controls (Saturn). These are examples of the power struggles suggested in the U.S. horoscope as it faces its first Pluto return.

Let Heather Cox Richardson explain why we have all been here before, as in the year 1890 . At that time, there was a rare Neptune-Pluto conjunction in Gemini, squared by Saturn in Virgo. This could have been experienced as brutal and surreal in general, and with respect to the U.S. horoscope, these patterns challenged its Uranus, intensifying that potential.

In a second post, HCR reports the latest effort by extremely short-sighted politicians to make it harder for U.S. citizens to kick the fossil fuel habit. This can be seen as a reflection of Neptune turning retrograde (a spotlight on oil and petroleum). It’s also a reflection of those who are still attached to the 200-year-old business model of making a living by literally exploiting (drilling and mining) the Earth. The new business model is literally Air, symbolized by the Jupiter-Saturn conjunction in Aquarius (an Air sign) on the last Winter Solstice. The U.S. Pluto return is in Capricorn. Pluto refers to things underground and power; Capricorn refers to corporations, governments, and mines. This is a significant battle that could make or break us. Clear?

Meanwhile, an ExxonMobil oil lobbyist was caught on tape naming 11 U.S. senators in both political parties considered to be “crucial” to ExxonMobil, while admitting that the company fights the science that sees climate change as an existential threat to humanity. This story aired on the UK’s Channel 4.

Team Air has its work cut out for it.

Finally, President Biden told reporters today he’d prefer to talk about “happy things.” It’s a holiday weekend, unemployment numbers are down, job numbers and the markets are up, and the U.S. has a birthday to celebrate. OK then! We’ll get back to all the depressing stuff on Tuesday, and make reading about it informative, entertaining — and hopefully motivating and inspiring. We live in such interesting times.

What are you doing for the holiday?

Here’s the 411 on personal consultations. Here’s the link to my world-famous Cosmic Tip Jar, to be activated by Avid Readers wishing to melt my heart. 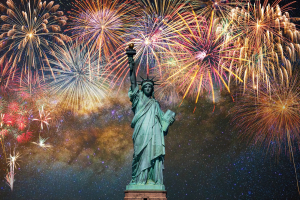