The Libra Moon has been void of course since 9:34 PM ET last night. That’s your excuse for any twists or flakes in your morning commute. Roll with them; focus on routine concerns and do not get carried away by crises that may crop up between now and 3:11 PM ET. Chances are they are much ado about nothing, and likely to sort themselves out when the Moon plunges into Scorpio this afternoon. Although…if there’s an upset in your world around 6:25 PM ET, that one you may need to take seriously, as it would be reflecting the Moon’s opposition to rebel Uranus. Let’s see if there are any surprises in the Friday afternoon news dump, especially dirt-digging ones, reflecting a “mince no words” face-off between Mercury (mindset, communication) and Pluto (depth; ruthlessness) in the wee hours on SATURDAY. The Sun’s cooperative alignment with Uranus at 1:58 AM ET on SATURDAY also suggests a disruptive spark.

The Moon will be in Scorpio all weekend, driving the days and nights with a need for depth and substance. No more airy-fairy Moon-in-Libra theories and talk; Scorpio needs to organize, consolidate and control — preferably with passion. You are free to shop on Saturday, but note that the Moon will be void on SUNDAY from 10 AM ET until 12:29 AM ET on MONDAY.   Purchases made during Moon voids often do not serve their intended purpose, yet you may be more inclined to indulge in impulse, courtesy of a challenging aspect (a square) between Venus in drama queen Leo and Jupiter, exact on MONDAY at 1:19  PM ET. Something big in the news — involving money, women (#metoo?), art, aesthetics, social expression?

Anyhoo…chill on Sunday and no sleeping in on Monday.  The Moon will be in high-flying Sag, all dressed up and probably nowhere to go, with Mars (action, anger) at a standstill, about to turn retrograde on TUESDAY. Not to mention a tense opposition between the Sun and Saturn on WEDNESDAY that might possibly clip the wings of a few dear leaders…or embolden them to impose controls on the rest of us. Oh, but I’m getting ahead of myself.. Then again, maybe not. “Supreme Court Rules That Warrants Generally Are Required to Collect Cellphone Data.” So there.

When was the last time you consulted with your astrologer? If it’s been over a year, you’re overdue. Planetary patterns between now and the end of the year pose unique challenges, and my money says you will benefit from understanding what it means for your unique horoscope. We’ve got Mars going retrograde next week…three eclipses in July and August…a Mercury retrograde and a Venus retrograde to navigate. Here is the 411 on consultations. If you just want to know how Mars retrograde is likely to manifest in your horoscope, I will send you a personalized write-up for $48.88. Please send your birth data here if I do not already have it. Here’s to your continued enlightenment!

UPDATE: Nikki Haley, the US ambassador to the UN — last discussed here in April (end of the forecast). With transiting Uranus squaring her Sun, she continues to act as a disruptive, independent force. This week she announced the withdrawal of the U.S. from the UN Human Rights Council and went ballistic over a UN report on extreme poverty in the US, claiming it to be “misleading.”

UPDATE:  Paul Ryan, Speaker of the House. With transiting Mars at a virtual standstill on his Aquarius Sun, we anticipated that June and July would be especially provocative.  Yesterday a GOP congressman trashed him on Twitter – and deleted it, but the point is, this attack made news. Also in the news: Speaker Ryan and Mark Meadows (R-NC) got into a fight on the House floor.  Oh, and the  latest GOP budget proposal recalls the Speaker’s 2011 budget plan to slash the income you would receive from your years of investment in Medicare and Social Security.  Why would they want to do that? Oh, to make up for the budget deficits the US will experience, now that corporations and other “haves” received a big fat tax cut.  You did not have to be an astrologer to see that one coming, except with respect to its timing.

Meanwhile, somewhere between this week’s potentially forgiving  Grand Trine among Mercury, Jupiter and Neptune, P45 signed an executive order touted as a stop to the separation of immigrant children from their parents. OK, but what about reuniting the thousands of children who are being held in undisclosed places all over the country?  Right. What about them?

Avid Readers know that this fascist trend 1) is not a trend; 2) is happening around the world; and 3) was written about years ago  — and on multiple occasions — in this forecast as a likely potential, given planetary patterns.  In Hungary, for example, this week legislators passed a law that would send anyone helping an illegal immigrant to jail.   And the musical “Billy Elliot” was canceled in Budapest after a news commentator called it “gay propaganda.” If you’re thinking of fleeing the United States, perhaps you do not wish to move to Hungary.

I meant to share a couple of items about thought and time control, suggested by last Friday’s opposition between Mercury and Saturn. Exhibit A: in Pittsburgh, a political cartoonist who worked for the Post-Gazette for 25 years said he was fired because his editors objected to his anti-P45 cartoons (today, the cartoonist found a new paying gig).    Exhibit B: in Japan, a worker was docked half a day’s pay for repeatedly taking a lunch break three minutes earlier than scheduled. Harsh!

Yesterday the Sun was at the Aries Point — at 0 degrees of Cancer, a.k.a. the Summer Solstice in the Northern Hemisphere. The start of a new season suggests a turning point — and a focus on leaders. We also had an opposition between Venus in dramarama Leo and Mars in “but-what-about-the-rest-of-us” Aquarius. Venus and Mars oppositions can be juicy and illuminating, but potentially regrettable. It was fascinating to hear that the CEO (leader) of Intel (tech company) resigned because he had a consensual relationship with an employee. Also fascinating: the Reuters article did not mention that the CEO — Brian Krzanich — is married. Thus I initially wondered what all the fuss was about.  2017 had to have been an anguishing year for Mr. Krzanich, with transiting Pluto on his natal Saturn at 18 Capricorn. Next year, he can figure out what “new lease on life” his second Saturn return is likely to bring., along with his zillion-dollar retirement. Birth data: May 9, 1960 — no time — in Santa Clara County, CA.

Also soon to have a second Saturn return: Tom Kiefer. He’s a former janitor at a Border Patrol processing center in Arizona. One day he started collecting the things that were seized from immigrants. He’s now turned them into art. No exact birth date for Mr. Kiefer, but take a look at his work here and here — and thanks to New York magazine for publishing these collages.

Another leader making news:  New Zealand Prime Minister Jacinda Ardern, who gave birth to a baby girl yesterday.  Fascinating coincidence: the baby was born on Benazir Bhutto’s birthday.  Benazir Bhutto is the only other world leader to give birth while in office.

UPDATE: Melania Trump, whose horoscope suggests she, like Brian Krzanich, may also experiencing a bit of angst or anguish. All month a midpoint between the Sun and Saturn has been activated by transiting Mars, suggesting “running hot and cold; energies feel confined; the sense of futility” (according to astrologer Noel Tyl). Melania also has the midpoint Uranus/Pluto at the Aries Point, suggesting that she can’t help but attract attention as a bit of a disruptive force. Hmm. Yesterday, the Sun was at the Aries Point, activating that disruptive midpoint. And yesterday transiting Venus (women, fashion, social expression) in dramarama regal Leo was adding more pressure to that already squeezed Sun/Saturn midpoint. Bottom line: Melania was an “agent of coat chaos” — yes, that’s an actual headline — with a fashion statement made while traveling to an immigration detention center. Coincidence or conspiracy? I dunno…but why else would she make such a fashion statement now? 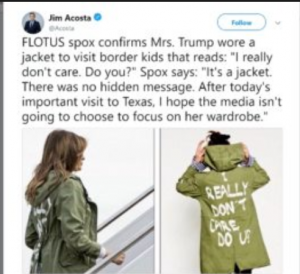 Thank you for reading this forecast. If you find it valuable and have been enjoying these musings for years, please know that contributions to my Cosmic Tip Jar are always appreciated.