So far this day is going exactly as anticipated. I’m working the polls again today — and there’s a delightful chatty buzz happening among my colleagues. It’s an apt reflection of the Moon’s meet-up with Venus in Gemini, where both are seeking to entertain and inform. It’s also reflecting the buoyancy of a harmony between Mars (assertion) and Jupiter (optimism). It’s a fine day for a celebration — and we’ve got something to celebrate: Juneteenth — a celebration of the end of slavery in Texas (two years after the rest of the country) — and now an official holiday here in New York (with calls to make it a federal holiday, too).

Mercury is now officially RETROGRADE. Reflecting the potential lack of focus, I left my glasses on the dining room table this morning. Had to go back home and retrieve them. If you’re new to this forecast, here are the general guidelines for managing Mercury retrograde (back by popular demand!):

Would you like to know how this Mercury retrograde will activate your horoscope? Toss $44 into my Cosmic Tip Jar as a Joyful Random Expression of Appreciation and email me your birth time, place and date. I will email you a few paragraphs of insights in a day or so.

This Mercury retrograde is in Cancer, sign of the Crab. Cancer needs emotional security — and is focused on fulfilling those needs in family, heritage, home and homeland. Mercury (how we need to think) is more inclined to express ideas based on feelings. Cancer is a Water Sign, after all — along with Scorpio and Pisces. So here we go again — with another long stretch of weeks with Mercury in a Water Sign, as we had in the last  Mercury retrograde (February-March),  which was in Pisces.

Mercury retrograde bodes well for things previously hidden to be revealed. This Mercury retrograde directly engages two planets in the U.S. horoscope: Sun at 13 Cancer and Saturn at 14 Libra. How fascinating to see excerpts from John Bolton‘s tell-all book being published yesterday. There’s no need to buy it; just read the reviews.

On SATURDAY, the Sun leaves Gemini and enters Cancer at 5:44 PM ET. Spring is done; summer has begun — at least in the Northern Hemisphere.

Here’s what you need to know about the first day of any season  — i.e., equinoxes and solstices — from an astrological point of view. The first days of Spring, Summer, Fall and Winter correspond with the first day (or first degree) of Aries, Cancer, Libra and Capricorn, respectively (there are thirty degrees in each sign of the zodiac). Got that? Good.

A person born with the Sun in Cancer is here to create and maintain emotional security. Cancer is ruled by the Moon, which changes signs faster than any other celestial body. Moon refers to emotional response; thus, Cancers have a rep for being moody. The keywords for Cancer are: I FEEL. If you are a Cancer born in the back third of the sign, my money says you’ve been feeling a lot these days. 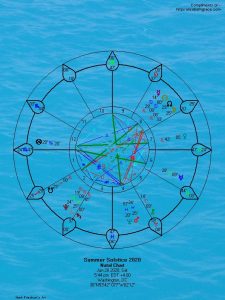 Three planets: Sun, Moon and Mercury — are locked away in the 8th house of death, debts, taxes, joint finances and shared values. It’s a Dead Moon — suggesting a sense of listlessness or restlessness, as the country senses something new is on the horizon — but what? The Moon is exactly square to Mars, suggesting conflict, aggression, courage, crusades — for better or for worse. That’s also setting the tone for P45’s planned rally in Tulsa, but the subsequent void suggests more fizzle than sizzle (for that particular event).  Another suggestion of disruption for the next three months is Uranus in the 6th — in an obsessive-compulsive connection to the Scorpio Ascendant. Uranus needs to be free — to be — it’s own unconventional self. We may see this expressed as a three-month obsession over the U.S. self-image — and this may be the source of a disruption.

Mars and Neptune are in the 4th House — our land; our core foundation. Mars suggests conflict; Neptune suggests confusion — and Neptune is in an obsessive-compulsive connection with the Midheaven (leadership and public status). Fog and lies — or idealism.

Jupiter rules the 2nd house of money and values, and Jupiter is in the 2nd House, almost exactly conjunction Pluto. Avid Readers know that Jupiter is not at its best in Capricorn, where rewards are handed out based on status or climbing a certain ladder. Pluto is extremes; Jupiter with Pluto suggests extremes of expansion in matters of abundance and power. In Capricorn, the two are impacting corporations and governments.

Tomorrow I will post about Sunday’s New Moon/Eclipse — and catch up on the news.

Thanks to Beth for the fun Mercury Rx mash-up!