After wandering aimlessly (perhaps) through boundary-pushing Sagittarius, as of 2:01 PM ET the day is driven by a proactive Moon in Capricorn. Take care of enterprising projects around the house or find ways to enhance your social status this weekend. A harmony between Venus and Saturn on SATURDAY at 9:36 AM ET facilitates structuring your values and aesthetics into something tangible, albeit streamlined. Mind the potential for outbursts around 1:41 PM ET, as the proactive Moon meets up with a proactive Mars. Outbursts are not necessarily a downer or a danger. They come in handy in the final stages of a long run. Saturday night has a dreamy potential, courtesy of a harmony between Moon and Neptune around 8:46 PM ET.

SUNDAY starts with the last challenge to last month’s New Moon agenda, a.k.a. the Third Quarter Moon. A focused power play and/or catharsis is suggested by the Moon’s weekly clash with Pluto at 9:02 AM ET, followed by a surprise or other upset to the status quo around 10:40 PM ET, when the Moon clashes with rebel Uranus. Moon will be void from then until 2:40 AM ET on MONDAY…no sleeping in.

But first…how’s your Mercury retrograde going? I missed the train yesterday and then misread the timetable for the next train. Ended up on a different train somewhere in Long Island — only to realize that it was taking me to the town I lived in when I was four years old. People, places and things from the past have a surprising way of REturning during Mercury retrogrades. The return trip into the city featured Google directions that took my Lyft driver absolutely nowhere near the train station and countless other delays. On the plus side, Pepper the Cat was REunited with a catnip-stuffed grasshopper that had been missing for months. You? 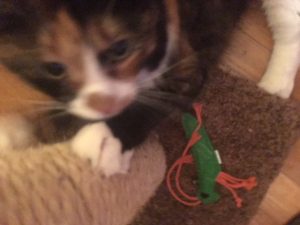 Conservative author Kevin Williamson said this week that women who have abortions should suffer death by hanging. Well that’s an apt potential of Mercury-Mars shooting off at the mouth. The next day, he was fired by his employer, The Atlantic. Happy Saturn square Mercury. Was that too harsh?

After a liberal judge won an election in Wisconsin this week (the first win for a non-incumbent “liberal” in 23 years), Governor Scott Walker had a “meltdown” about a possible “blue wave” in November. With transiting Jupiter on the Sun and Moon of this double-Scorpio last fall, we can appreciate why he tossed his hat into the ring for a third term. That expansive influence will be behind him in November. Instead he’ll be wrestling with the  third squeeze suggested by transiting Saturn in a tough aspect with his equally tough Mars-Saturn square. He’s wrestling with the first squeeze now, with the due in late May/June. Wish we had a birth time.

Embattled EPA chief Scott Pruitt continues to feel the squeeze of Saturn on his natal Libra Moon, as more and more details of his swamp monster corruption are exposed.  That’s not going away this year — nor is the tremendous effort in the face of loss suggested by another key pattern.  With its comfort and status quo-seeking Taurus driven by a people-pleasing Moon in Libra, Pruitt’s persona is fronted by a regal luxury-loving Leo Ascendant. Oh — and this regal projection is all the more inflated by a natal Jupiter at 26 Leo — yes, in his First House — right there for all the world to see. The man needs to live large…so now you can understand his first class flying habits and other ostentatious perks, even as he slashes and burns.  And of course he’d be a bigly fan of P45, with that Jupiter on P45’s equally regal Leo Ascendant and Mars…and of course P45 would still be singing his praises this week as the perfect candidate to replace Jeff Sessions as Attorney General.  If only Pruitt’s Jupiter hadn’t been totally eclipsed last August and again in February, forcing all of that glitz into the light. By the next New Moon on April 15th, transiting Uranus will have hit his Midheaven — professional and public status, suggesting an opportunity for change, for better or for worse.  Here is his horoscope.

In other news, harsh judgement from the NFL: a cheerleader is fired after posting a picture of herself on Instagram in lingerie. Op-ed write Kareem Abdul-Jabbar rails against the NFL’s efforts to “protect America from witches.” How do you know if you’re in the company of a witch? Sir Bedevere explains, in this classic scene from Monty Python & the Holy Grail.

Finally, a sneak peek at the kinds of stories we’ll be seeing a lot more of once innovative Uranus enters Taurus on May 15th. Taurus refers to material comfort and security, banking and agriculture, just to name a few. Uranus refers to technology, disruptions and genetic mutations. “Scientists Harvest First Vegetables in Antarctic Greenhouse.”

What’s going on in your horoscope? When are you likely to be feeling a squeeze? A push for expansion? What about your significant others and your children? Find out in a personal consultation. Many thanks for the referrals!

P.S. Delighted to be published in this month’s issue of Dell HOROSCOPE!  Do run out and buy a copy, won’t you? 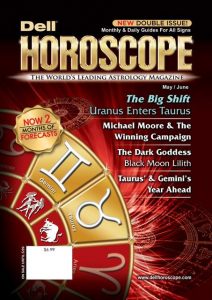 Tuesday 7/11/2017: Sneak Peek at the Rest of the Week; Full Moon in Capricorn Gets Your Goat