Before we get to the forecast, please note that my website will be updated before the end of the month. Pretty much the same design, but the font will be different and it will be easier to read on a smartphone.  Hopefully you will like it. Huzzah!

Also, I will be in Denver next week — still have a few appointments available for in-person consultations — here’s how to contact me. Otherwise I’ll be working with my esteemed colleagues at ISAR (International Society for Astrological Research) to plan our next super-fabulous conference — be there or be square — in Denver, September 10-14 2020.

The Moon waxed to fullness at 7:12 AM ET — at the verrrrrry end of Libra — all that is fair, courteous and aiming to please. Enjoy it while it lasts.  Opposing the Aries Sun, the challenge of the Libra Moon is balance all that is “we” with all that is “me-me-me.” Yes — and good luck with that challenge — as this Full Moon is buzzing with the energy for revelation and disruption, suggested by the close connection of rebel Uranus with this Sun-Moon opposition. You may have experienced the first jolt around 12:25 PM ET, when the Moon (now in the moody bastard depths of Scorpio, where it seeks depth and substance for the sake of power and control) and Uranus are exactly opposed. The other shoe drops on Monday around 7:05 PM ET, when Uranus meets up with the Sun.

The chart for the Full Moon set in Washington DC has — OMG — the same Midheaven and same Ascendant as the chart for the 2017 inauguration: ASC 14 Taurus and MC 26 Capricorn. Most all of the planets in the Full Moon chart are hidden from obvious view, suggesting a lot of action going on behind the scenes. What is front and center is Mars, planet of action, in blah-blah-blah Gemini. Two-faced? Double-talk? Sure — in an effort to prove oneself the cleverest, most entertaining self in the room. Actions taken over the next week may have a zealous, faith-based or deceptive spin, courtesy of Neptune. The planet referring to fantasy and drugs will square Mars on April 27th. 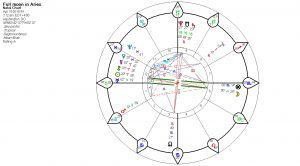 The Sabian Symbols for this lunation are “three mounds of knowledge on a philosopher’s head” (for the Libra Moon) and “a duck pond and its brood” (for the Aries Sun.  Sabian Symbol guru Blain Bovee suggests we apply these images with a mind to “the genius of being at home with all elements of wisdom and understanding…the genius of tending to domestic matters as if they were sacred…brooding over weighty matters…putting one’s ducks in a row” — to name a few. In the news, we’re sure to see plenty of brooding over knowledge that was released this week…

On SATURDAY at 4:55 AM ET, the Sun leaves Aries and enters Taurus. Happy birthday to the cows and the bulls! The Taurus mantra is I HAVE and it is here to give form and function to all of the seeds planted by Aries inspiration. Stop and smell those roses, will you? Meanwhile, at 12:11 PM ET, Venus leaves Pisces for me-me-me Aries, replacing any Pisces need for accommodation with forthright demand. You got a problem with that? Let’s not waste any more time! In other news, the Scorpio Moon continues on its quest for depth and control until 11:59 PM ET; it goes  void until SUNDAY at 11:59 AM ET.

With the Moon now in Sagittarius (from noon ET onward), SUNDAY is apt for pushing boundaries, righteous opinions and exuberance. The Moon’s harmony with Venus and Mercury that afternoon and evening makes for good times.

No sleeping in on MONDAY. The Sag Moon won’t be void and the Sun’s meet-up with Uranus at 7:05 PM ET charges the air.

Between TUESDAY and next MONDAY there are no exact aspects among the planets, except to the Moon — but this does not mean it’s likely to be an uneventful week. Quite the contrary, experience has shown.  These apparent lulls are often deceptive. It’s like looking at a giant ice shelf on the most sparkling sunny day ever…and then, for no apparent reason, half the shelf crumbles into the ocean. So if an “other shoe” drops in the headlines, I will not be surprised, and neither should you.

I’d put the fire at Notre Dame in this category of events. Now you see it; now you don’t. A huge exhale after last week’s super-stressed patterns involving the fiery Aries Sun and harsh Saturn, South Node, Pluto — and that “hell hath no fury” of an asteroid called Eris. Did you know that Notre Dame was built on the site of a temple honoring Jupiter? So interesting, given that Jupiter turned retrograde on April 10th. And why was I so drawn to include “Tyger, Tyger, burning bright” in the title for Monday’s forecast? 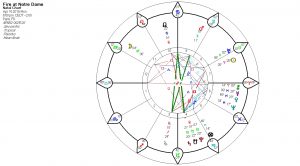 The chart for the reported start of the fire (it’s now believed to have been caused by an electrical short) does not look so catastrophic. It’s interesting to see the Saturn/Pluto midpoint in touch with the North and South Nodes, suggesting mourning. It’s interesting to see the Midheaven of that chart (4/15/2019 6:50 PM Paris, FR) conjunct the Jupiter/Pluto midpoint, suggesting massive power and resources (billionaires are pledging millions of euros to rebuild). This echoes the square between Venus and Jupiter (a double dose of protection generosity and compassion), exact that day at 7:15 PM ET.

Did you know that Venus refers to bees and copper? Did you know that sixteen copper statues were removed from Notre Dame’s spire on April 11th? And that the 180,000 bees living on the roof survived? So did many relics, the rose windows and the organ. And no one died in the fire. And the two bell towers survived, too! What was destroyed? The spire — and you can ponder what that spire might symbolize, in the wake of two hard aspects to the Aries Sun and patriarchal Saturn and rot-exposing Pluto. Many churches — not just the Catholic Church — are having to face the reality of rot and corruption among their Powers That Be. And did you know that at the same time of the Notre Dame fire, there was a fire in the mosque at Jerusalem’s Temple on the Mount?  And that here in New York, a philosophy professor was arrested in St. Patrick’s Cathedral with the obvious intent of burning it down? And that his next stop was Rome?

I have precious memories of Notre Dame — Our Lady of Paris.  I lived in Paris after graduating college. I spent many an afternoon gazing at the flying buttresses from a bridge over the Seine. It is a truly magical and inspiring scene. It was horrifying to see it in flames. But…they will rebuild, rebuild! Like a phoenix rising from the ashes, as the aforementioned millions of euros are pouring in  — just like that! Which leaves me pondering, “What would [insert name of preferred deity/savior/prophet] do?” Rebuild the structure — or find another purpose for such largesse — one that might directly impact the health and well-being of humans and other living creatures on Planet Earth? It’s a rhetorical question; I don’t expect an answer.

With Mercury and Venus at the end of Pisces — the end of the entire zodiac — it can feel like the end of the world, and certainly a world. Did you see the videos of Parisiens who gathered to mourn the damage to their cherished Lady? They sang hymns — I dare you to watch and not weep — here and here. The potential for loss and catharsis is clearly seen in France’s horoscope. As I wrote back in December:

Countries have horoscopes. Exhibit A: France, which has experienced three weeks of violent protest over a fuel tax that is supposed to combat climate change (the tax has apparently been withdrawn). We can appreciate why the French are on emotional overkill. In modern France’s horoscope, transiting Pluto is squaring its me-me-me Aries Ascendant and opposing its emotional-security seeking Cancer Moon. Next month it will need to face a sobering reality check when transiting Saturn squares its Libra Sun and Mercury. Right now, Saturn is atop France’s Capricorn Midheaven, suggesting it may be seen as being at the top of its game. It does seem that France’s authoritative stature has increased on the world stage. At the G-20 summit in Argentina, it was Emmanuel Macron who was overheard allegedly “warning” the Saudi Crown Prince M.B.S.

Now transiting Saturn has moved past its squeeze on France’s Libra Sun-Mercury and is now applying pressure for a potential cut on France’s Aries Ascendant. Despite the potential purge/catharsis, patterns in France’s horoscope do suggest continued growth and empowerment on the world stage over the next year or so. Cue La Marseillaise now, please. And note that Pluto and Saturn were highly active in the horoscope of the U.S. on 9/11. Coincidence or conspiracy?

The redacted Mueller Report was released yesterday, right on schedule — as anticipated in prior posts. Mercury (how we need to think) was out of Pisces — in Aries, demanding prominence at the Aries Point — and absolutely, positively not messing around — none of this “if I believe it, it must be so” Pisces prattle. The challenge for Mercury in Aries is that it is usually wayyyyyyyyy ahead of everyone else (I speak from personal experience) — and it’s gonna take a while for the masses to catch up. As predicted back in March, P45’s Attorney General William Barr did in fact misrepresent Mueller’s findings — and here’s Stephen Colbert to spell it out for you here and here.   You can read the whole report (redacted) here — and that’s what I’ll be doing on my upcoming flight to Denver.

UPDATE: George Conway, husband of Kellyanne Conway and declared windmill cancer survivor (per his Twitter profile)  penned an op-ed calling for P45’s impeachment yesterday: “Trump is a cancer on the presidency. Congress should remove him.”  With transiting Mars (assertion; action) exactly square his Pluto (power) of course he did. I will be interested to see what Mr. Conway is up to next February. Whatever it is, it should be quite persuasive.

And….that’s a wrap. With Monday’s meet-up between the Sun and daredevil Uranus is in effect now and through the weekend, just remember that if at first you don’t succeed, skydiving’s not for you.

I wish I could take credit for that pithy remark. Saw it somewhere on Facebook in 2016.

Thank you for reading this forecast. Now let’s talk about what it all means…for you! Here’s the 411 on consultations.